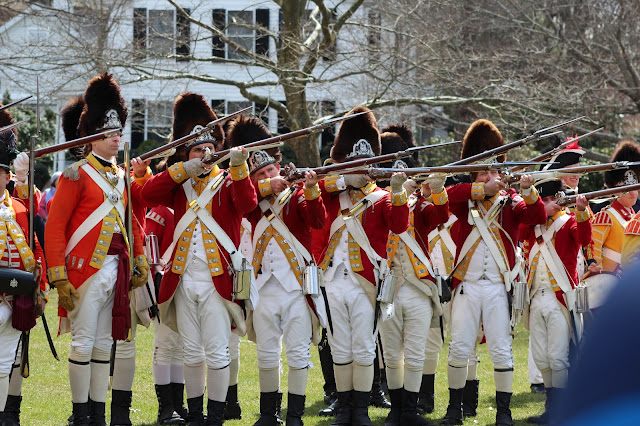 It's Patriots Day weekend and this area is abuzz with activity. Events were scheduled throughout the weekend but Mother Nature had other plans. Normally, we have Paul Revere's ride, reenactments and parades, a Red Sox game and of course, the Boston Marathon.

Tomorrow a storm will roar through here bringing freezing rain and howling winds. Paul Revere won't ride, there will be no reenactment on the Battle Green or a parade, no Red Sox game. Marathon Monday will go on as scheduled. Those runners will face more than Heartbreak Hill with tomorrow's beastly weather, 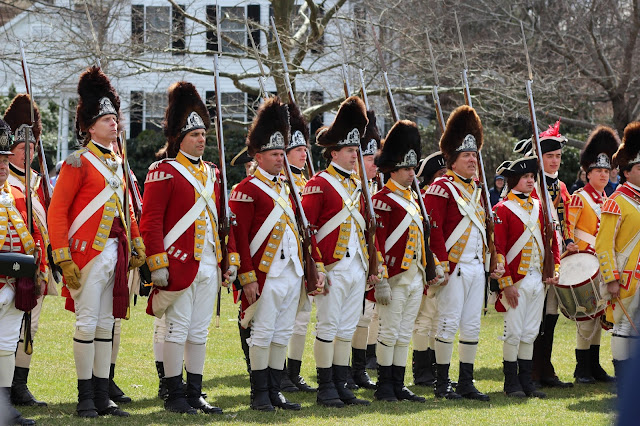 Sometimes it's just as nice to see the dress rehearsal as it is to see the real performance. In the case of a battle reenactment in Lexington, it saves me from getting up at the crack of dawn. The Battle Reenactment is normally at 5:30AM. Way too early for this night owl! With the weather prediction for tomorrow, I am so happy that I opted for the dress rehearsal. Last week, the weather was much nicer for outdoor activity. 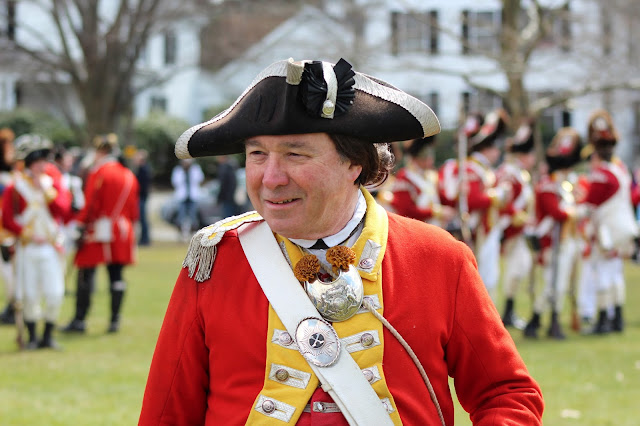 Meet Paul, a gifted reenactor who is always on the British side. He does his job well and always with a sense of humor. 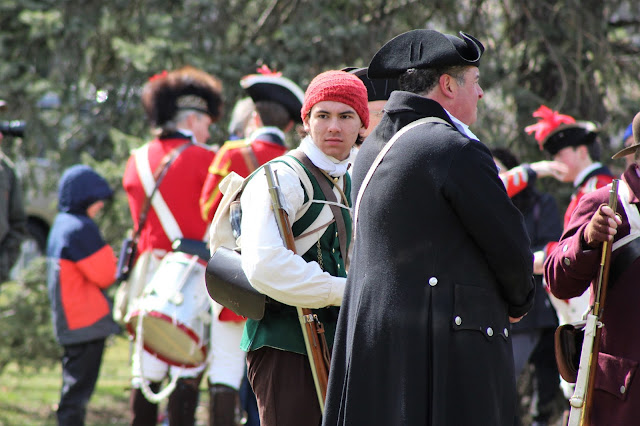 More scenes from the reenactment. 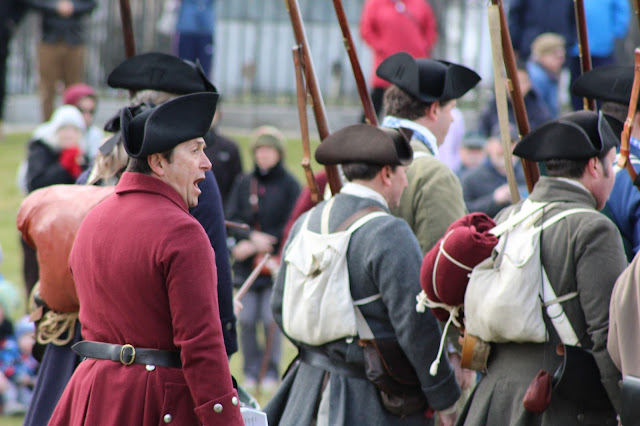 I love living in this area, so much history and plenty of reenactments. Boston, Lexington, Concord all a short drive away. 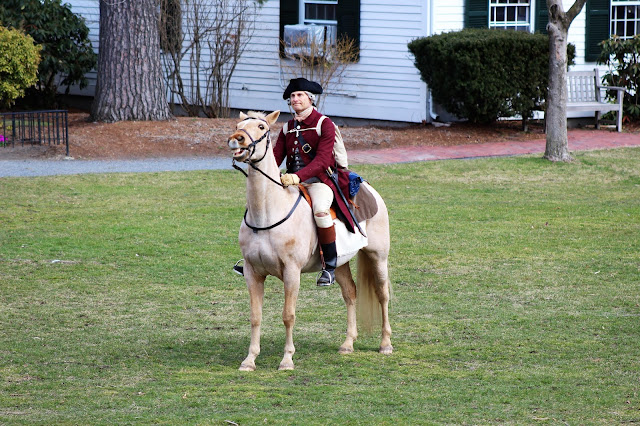 Paul Revere, his horse, and I almost collided on this lawn. He was at full gallop and I was in his way.
Luckily, I froze and he went around me. 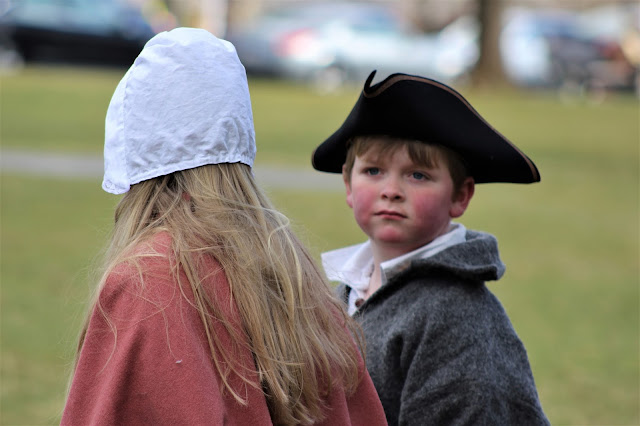 The youngest reenactors always impress me and they are so adorable. 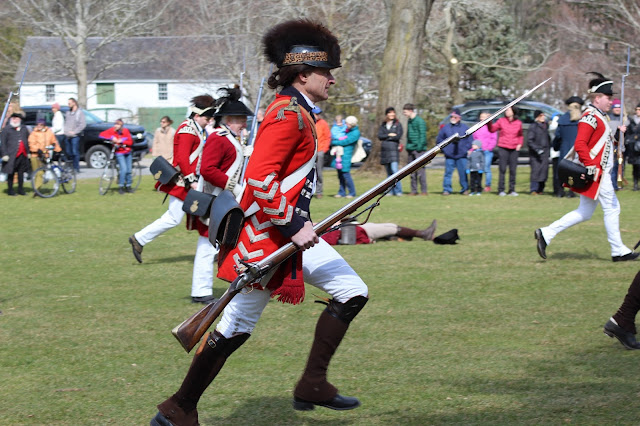 The battle was in full swing. 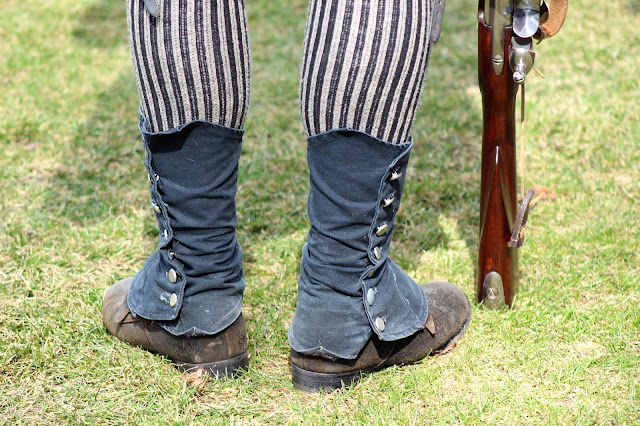 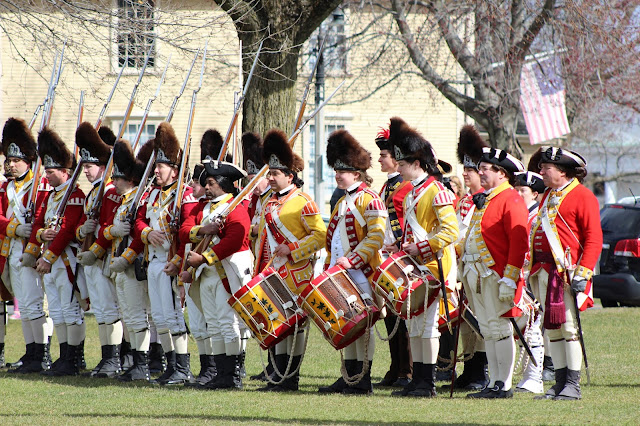 In addition to still shots, I took some video of the fifers and drummers. 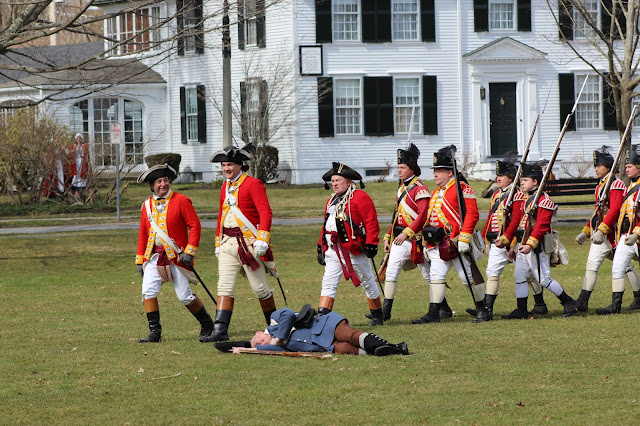 We were outnumbered by the British. 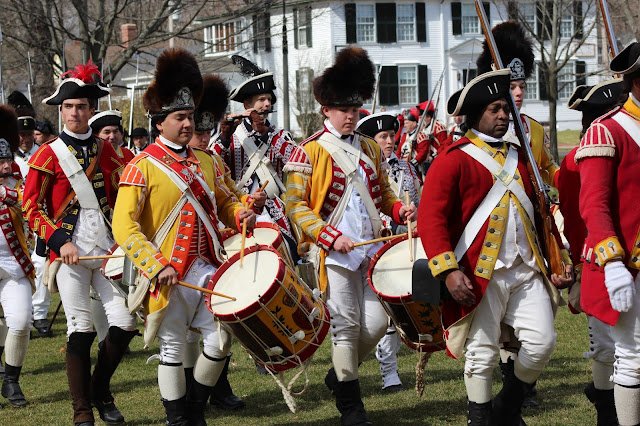 And the Brits had flashier uniforms. 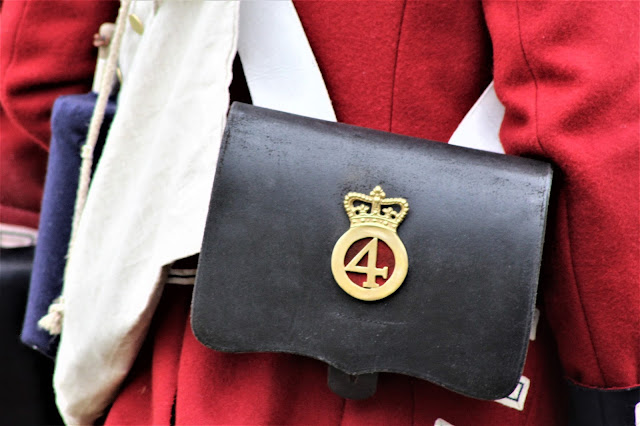 I just had to get a close-up of this man purse. 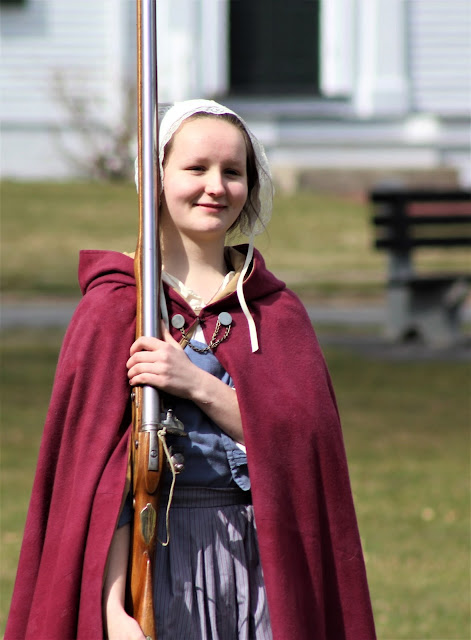 I could get really close to the reenactors after the battle was over. Did you know they run through it 3 times at the dress rehearsal? And someone always pulls a prank. That's some inside scoop for you. 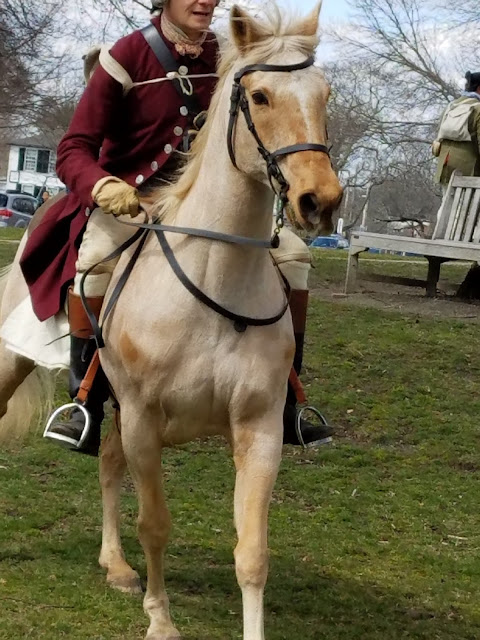 Here's my almost unfortunate run-in with Paul Revere and his horse or is it the headless horseman? Anyway, it was my fault. I should not have been on the path at that moment. 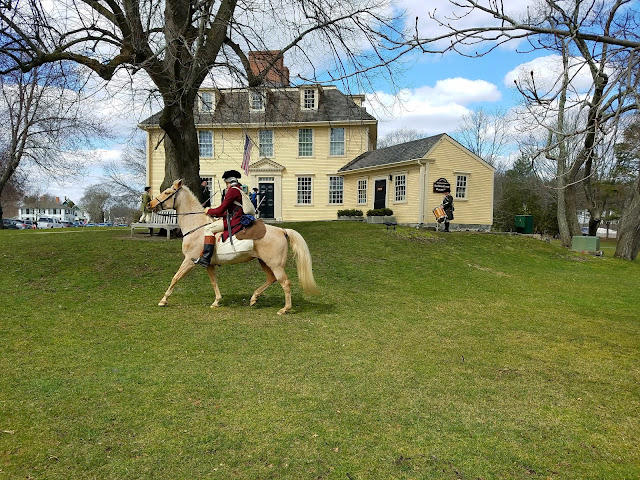 Here's one of my favorite shots of the day. That's the Buckman Tavern in the background. 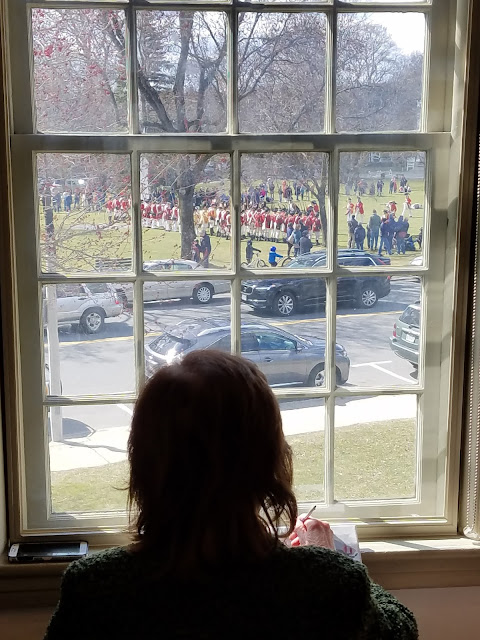 My sister was live event painting at the reenactment.  Actually she was on the second floor of the Buckman Tavern. 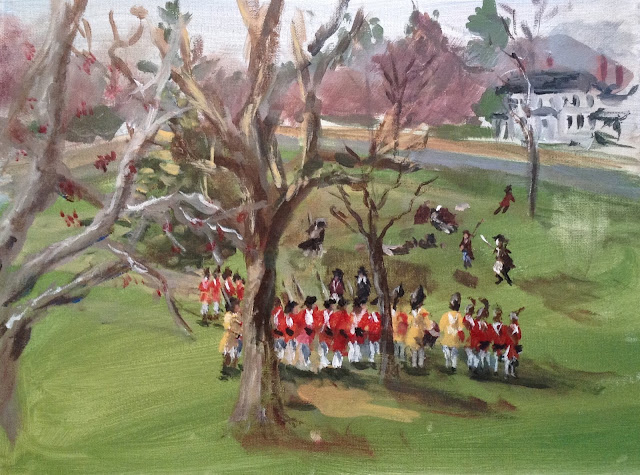 Here's her painting of the battle. My sister sent this photo to me but I think I need to credit the  Lexington Historical Society. I think they took the photo. My sister is doing some exciting work with them. 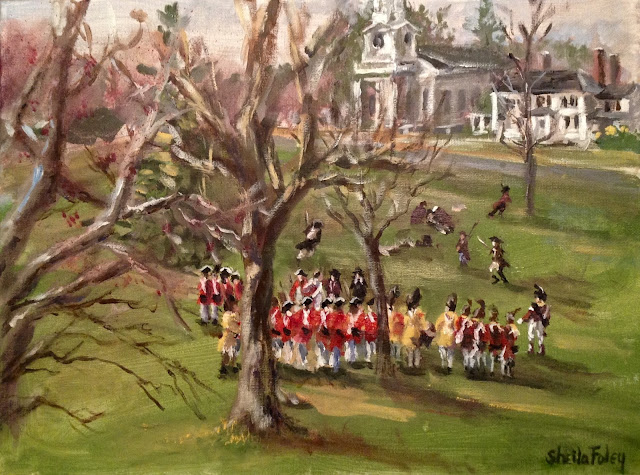 Later she decided that the church which was not exactly period needed to be in the painting. She found out that the pillars of the church were actually from the time period.

Blondie's Journal said…
First, your sister is so deserving of her art being recognized. It lends a new (to me) interpretation of the way the soldiers were illustrated in traditional works. The corgi's running alongside the horses, the gold gilded frames...nawwww. I like this relaxed look

I'm so glad you were able to see a bit of the event by way of rehearsal. This weather is nuts. I'm up a little late watching never ending politics, and I just noticed the snow under the street lights. Good God!

Stay warm and safe, and keep your fingers crossed we will have a real spring soon!!! ;-D

dmcd17@hotmail,.com said…
Elaine, I may have mentioned to you before that on July 4, 2011, I was thrilled to take a bus tour that included Lexington and Concord as well as the historic sites in Boston. What an experience to visit in person even though I didn't get to see the reenacment! Enjoyed this post.

Marilyn Miller said…
How fun to see pictures of the reenactment. I remember visiting Concord some years ago and can just imagine them running through a field nearby. Your sister's artwork is lovely too.
April 16, 2018 at 12:20 PM

artistswriter said…
Elaine, thank you so much for posting this! Boy, did that bring back memories. Been to the Buckman many times (the first time was a school trip in elementary school! Can still remember them pointing out the bullet hole in the door!), and of course been to Lex/Concord and all the historical sites. There didn't used to be such a fancy enactment, but I'm so glad there is now! This is such an important part of our history and many in other parts of the country know so little about it. It's really sad! Great photos! Glad you avoided colliding with Paul!! Congrats to your sister on her art work! Thanks for another taste of home!! Jane xo
April 16, 2018 at 5:29 PM

Anonymous said…
Beautiful photos and beautiful artist's rendition of the event by the Fantastic Foley sisters :).
April 18, 2018 at 8:35 PM