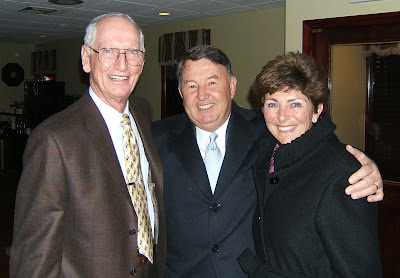 Just before Thanksgiving, on Saturday November 18th, my Dad passed away. Anyone who knew and loved him was shocked to hear the news of Richard "Dick" Foley's passing. He's on the left in this photo at his 80th birthday party.

Although he was 91 years old and on oxygen 24/7, he was considered by his friends, family, neighbors, and doctors a robust 91 year old. The Tuesday before his death he went to his usual gym, Planet Fitness, and walked the treadmill and then he got a haircut.

At his wake and funeral, I heard wonderful stories of his kindness and devotion to his family, friends and his work.

He was obsessed with golf. It certainly was no secret. He even tried to get me to play. When I was 6, he made me a small golf club and he would take me up the street from our house to the Unicorn Golf Course to the putting green. I was more interested in picking up the colorful broken tees on the course and washing golf balls with the extremely fun to operate ball washer than to learn the game of golf.

He was a proud member of the Massachusetts Golf Association and became a rules official at tournaments. He would also rate golf courses so he played the game all over the state. His involvement with the Francis Ouimet Golf Scholarship was important to him and it was this organization that we are hoping will receive donations in his memory.

At the wake, a young man told me that my Dad had positively impacted his life. Dad had encouraged him to apply for the Ouimet scholarship and he did. He attended college and met his wife at school and then he went on to work for the Massachusetts Golf Association. He said he owed my Dad so much.

Another man showed me a photo on his phone. It was the clubhouse at Longmeadow, my Dad's home course. The flag was flying at half staff for my Dad. He said he would send me the photo.

The funeral was described as deeply personal from many who attended. The priest who officiated the Catholic Mass knew my Dad well. Knew where he sat each week at Mass, knew he served in the US Navy, knew he and his shipmates rescued George Bush Senior from the Pacific Ocean when the Senior Bush's plane landed "in the drink" during WWII.

The man pictured in the photo above gave the tribute. He was a caddy for my Dad. He said he always wanted to emulate my Dad and become a better man. My Dad would be honored as he viewed this man as one of his best friends.

I could go on and on with stories I heard from the wake and funeral but I won't. I felt the funeral was as beautiful as a funeral can be. The flowers exactly as my sister and I had envisioned, green and white hydrangeas and winter kale to give the green effect of a golf course and bells of Ireland as a nod to Dad's love of his Irish ancestry. He loved to research his relatives from this country and Ireland.

He was buried with military honors and my sister and I were presented with the flag. Taps was played at graveside.

I want to thank everyone who called, sent cards, attended the services, texted, emailed, sent food, changed travel plans to attend the services and offered a shoulder to cry on. The support was and still is amazing.

I will leave you with this video taken when Dad was 89 years old. Practicing his swing at his cousin Teddy's golf course, a place he loved to frequent. My sister took the video on her IPad and I am so thankful we have this little movie of him in action. I will treasure it always.

Mezzodrama said…
Elaine, my condolences to you and Sheila. Your dad remains an inspiration. Just seeing that beautiful fluid swing at 89 brings joy! Thank you for sharing. Love to you and Sheila.
December 9, 2017 at 11:31 AM

Amy Chalmers said…
I’m sorry to hear about your dad’s passing Elaine. I loved watching him taking his practice swings. Your sister showed her love and patience for him. He must have been a wonderful dad.
December 9, 2017 at 1:43 PM

artistswriter said…
I'm so sorry for your loss, Elaine. What a wonderful tribute to your Dad. My Mom passed away in March. She was 97. But we still miss her. I can identify with what you are experiencing. So glad you have wonderful memories. Jane.xo
December 9, 2017 at 5:20 PM