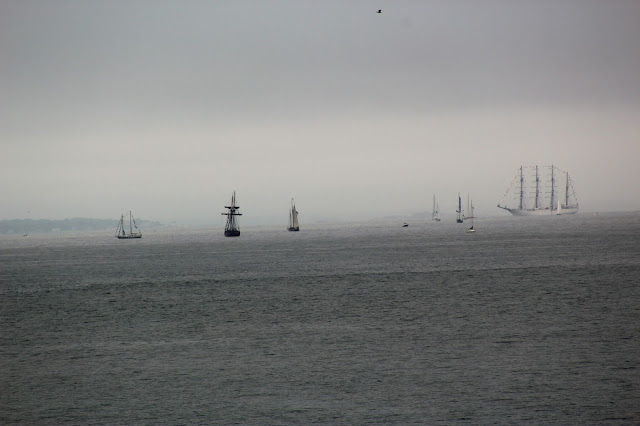 Back in May, I applied for press credentials for the arrival of the Tall Ships. I knew I wanted to see Sail Boston 2017 and after looking at the website I saw that bloggers qualified as media so I applied. To my surprise, I was granted credentials and I prepared to attend the Parade of Sail.

I decided to view the parade from Deer Island which is located in Winthrop, Massachusetts. The location would afford me an opportunity to see the beginning of the parade and a view of the Boston skyline.

The day arrived and I had made all my preparations. I knew security would be tight. I had given my info to the Deer Island contact, my car registration, make and model of my car and the names of occupants of the vehicle.

My friend Debbi also received press credentials so we traveled together. I woke up at 5:00AM hoping to arrive at Deer Island at 6:30. We did not encounter any traffic on the way in which was shocking. I guess our early arrival was a good thing! We were waved through the first checkpoint to a second one. State police and their dogs were on duty. We were requested to open all doors and the trunk and to leave the vehicle. The dog, a young lab, did his job. Sniffing every inch of the car while the police looked under the vehicle.

We received the all clear and provided documentation and we were escorted to the gate. Every single official we encountered was polite, super nice and helpful. We parked right behind the state police vehicle and entered the gate. I was so relieved we did not have to walk miles to get to the viewing area. I had loaded my backpack with my camera, an extra lens, second camera, snacks, bottled water, sunscreen, Kleenex. I was prepared for a full day at sea.

The fog was quite thick when we arrived and our clothes became damp very quickly. How we suffer for our art! I do love fog, it makes everything look so mysterious and the cloud cover would make for more vibrant colors and interesting photos. I especially liked the cooler temps. I am not a fan of Summer heat. 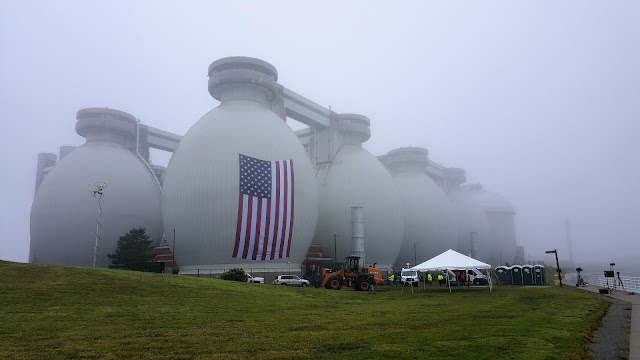 As you can see, the egg digesters on Deer Island were shrouded in fog. The Parade of Sail was delayed by one hour for safety reasons. The fog did burn off nicely, it just took longer than expected. 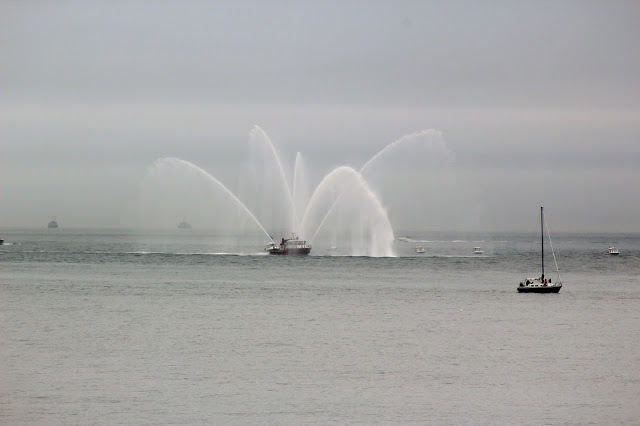 There were a few water boats putting on a show. 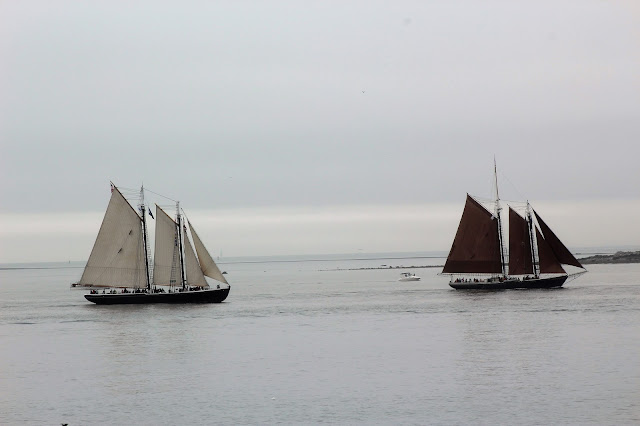 The parade of 55 ships was impressive! Each one made a graceful entrance and passed right in front of us. When you sit on rocks overlooking the ocean, no one blocks your view. 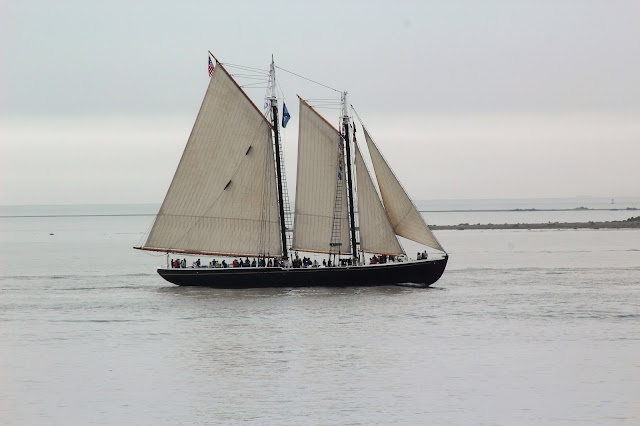 I had to pack my telephoto lens so I could pick up some of the details on the ships. 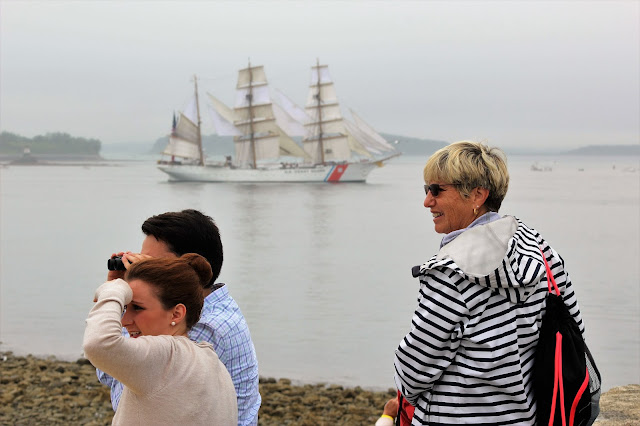 As the fog burned off, the sun came out. You can see how close we were to the ships. Deer Island was a definite prime viewing spot. We saw the beginning of the parade and then we could see the ships head towards the Boston skyline. 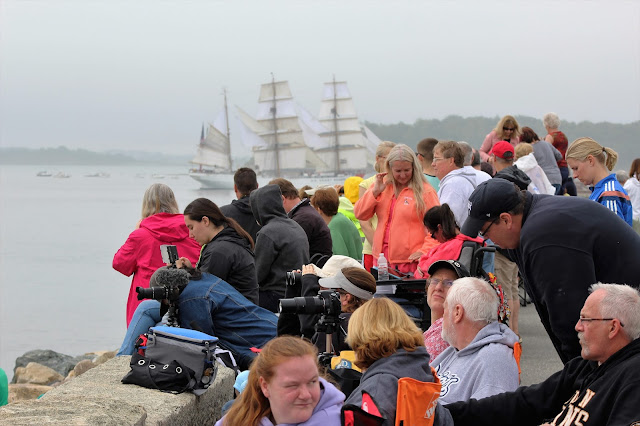 A crowd gathered as the parade progressed. We still had our lucky seats on the rocks and we weren't moving! 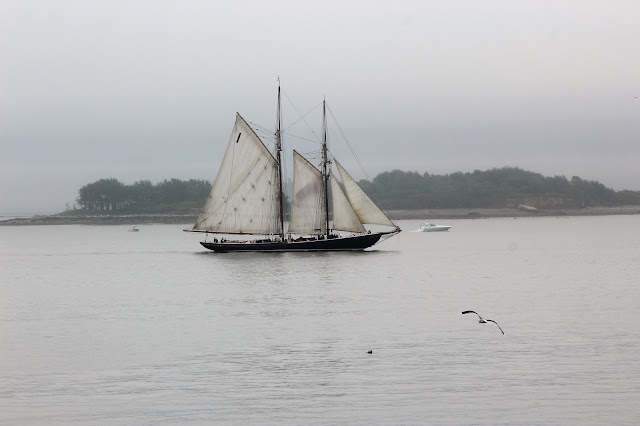 I not only focused on the ships but proper seagull placement was important. As I had mentioned in a Facebook post, seagulls were photobombing my shots! 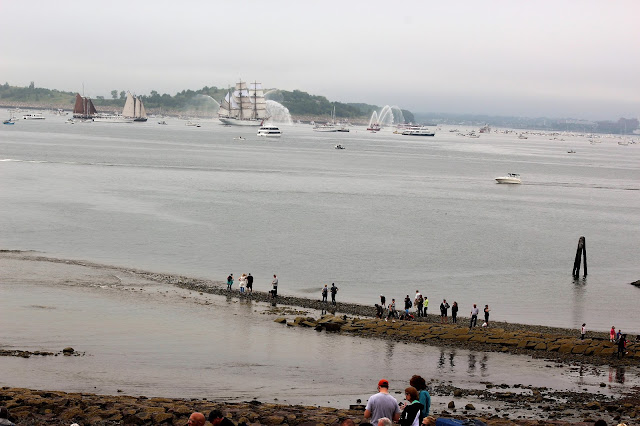 I decided to move from my spot and take a walk around the other side of Deer Island. You can see people were even stationed on the jetty. 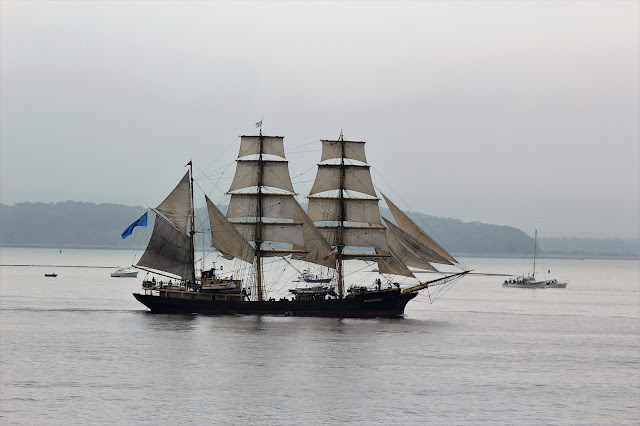 The Tall Ships take you back don't they? Back to the history books when wars were fought on these ships and goods were transported on graceful vessels. 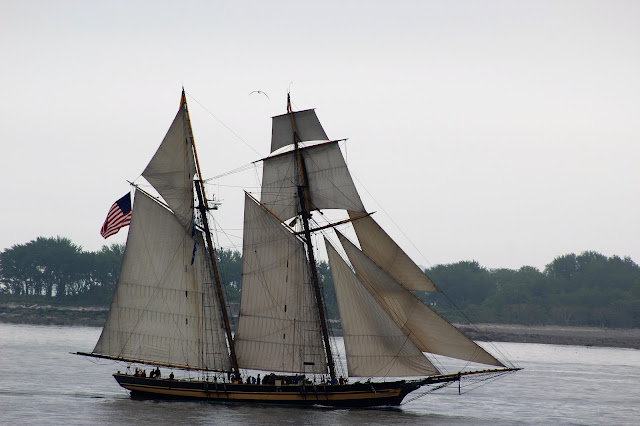 One of the American ships, just beautiful. It made me feel so proud of our country. 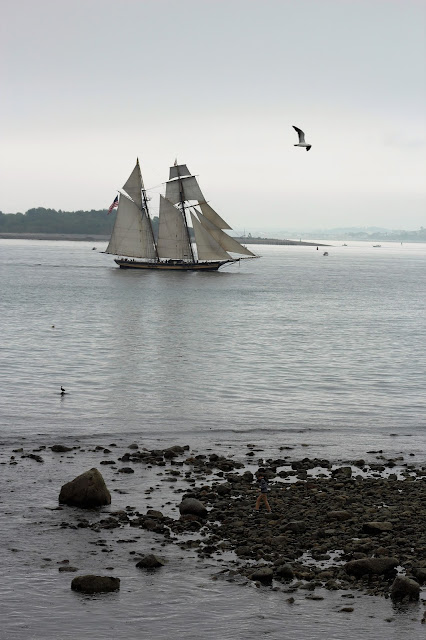 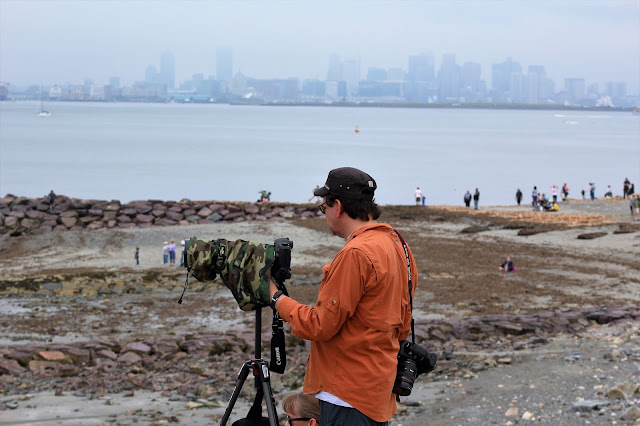 And there is the Boston skyline through the fog. 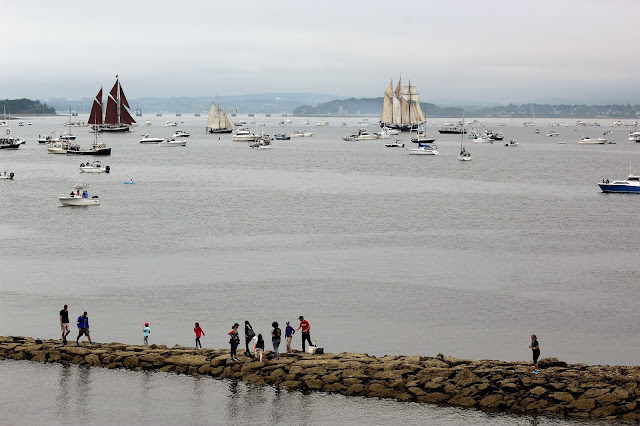 Lots going on here. People on the jetty, small craft hoping for a closer look at the ships, and all the textures and colors of ocean life. 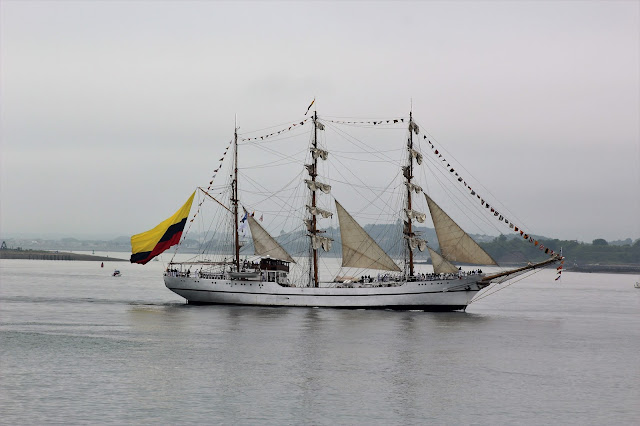 One of the largest ships that we saw. Love all the masts. It was just gorgeous! 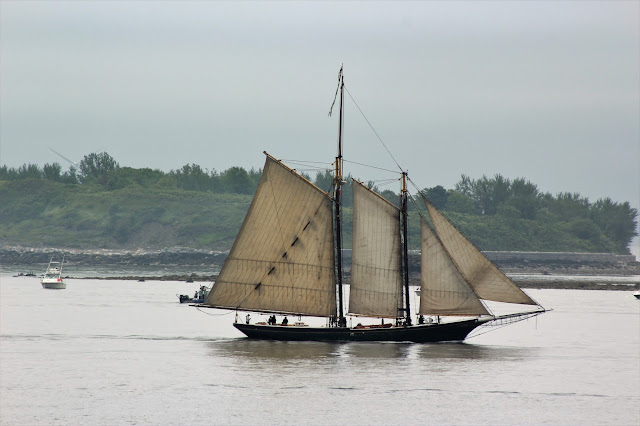 We left before the parade finished. We had been at the site for nearly 6 hours and despite several applications of sunscreen 85, I felt it was time to say goodbye. 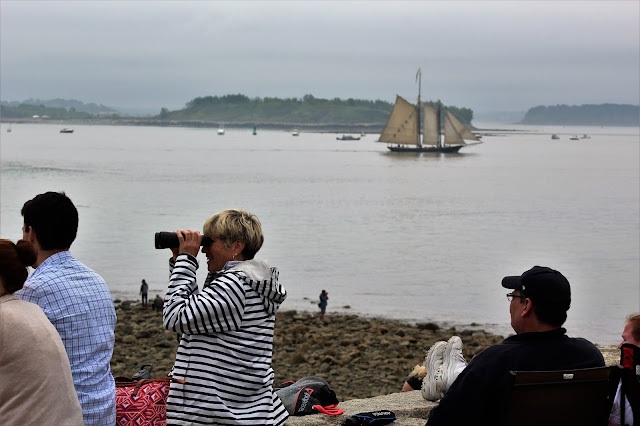 One last look and a quick goodbye to my new Tall Ships friends. The ships are in town until June 22nd so I hope to make a few more trips into Boston for other Tall Ship related events. Besides, I haven't worn out my media credentials yet!!
Email Post
Labels: Boston Deer Island Massachusetts MWRA New England Parade of Sail Sail Boston 2017 Tall Ships Winthrop

Laura Jenkins said…
Some of these pics would be beautiful painted or just simply framed!
June 19, 2017 at 11:01 PM

Blondie's Journal said…
I've never read a post of yours that had enthusiasm and excitement burst forth like this one! Your photos are exceptional, Elaine. I keep referring back to my few trips to Boston in the early 80's...the tall ships were there then. Shortly after they were in Chicago. Ironic.

YarnyDragonfly said…
Thank you so much for sharing your Tall Ship experience! I wasn't able to go to the Parade of Sail, so this was the next best thing. I hope you'll do another post with more of your Tall Ships adventures.
June 20, 2017 at 1:09 PM

Anonymous said…
Nice job Elaine. You earned your press credentials. Just last night i finished reading Philbrick's "In the Heart of the Sea". Between reading the book and seeing your pictures I have developed a desire not just to see the tall ships but to sail on one around Cape Horn. Thanks for a great blog post.