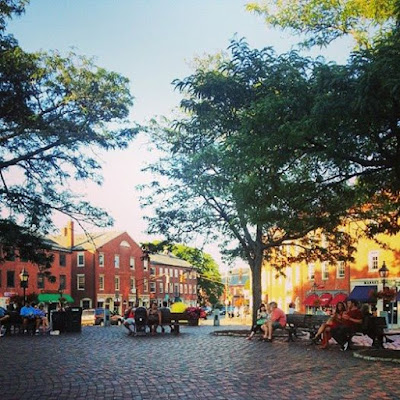 One of the items on my Summer 2015 Bucket List was to attend a lantern festival. I was referring to the one held in Jamaica Plain at a pond in a cemetery. For years, I wanted to attend this festival. Sadly, it has been cancelled the last two years.

I was excited to find another lantern festival taking place this weekend in Newburyport, one of my favorite places to visit. A friend and I headed north to Newburyport for this adventure.

Newburyport is beautiful with cobblestones on the sidewalks, historic homes, beautiful harbor views, and plenty of shops and eateries to keep you entertained. We each had a lobster BLT for a late lunch/early dinner. 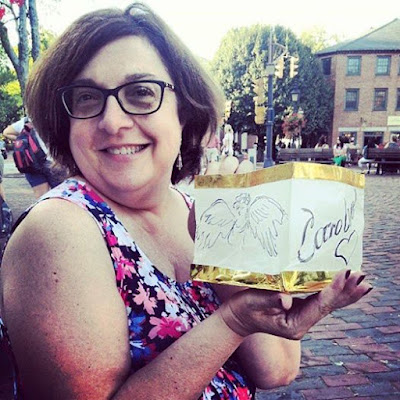 After dinner, we headed to Greetings by Design to purchase our lanterns and then buy some decorating supplies. The lantern festival is an annual fundraiser for Ovarian Cancer awareness.  Lanterns are floated in a pond in honor of a loved one who has passed. Gena, my friend, told me her mother had died from this disease so I imagine it was particularly poignant for her. I did not know Gena had artistic talent but she drew quite an angel on her lantern in less than perfect circumstances. We were sitting on a park bench in the downtown area and drawing with sharpies. 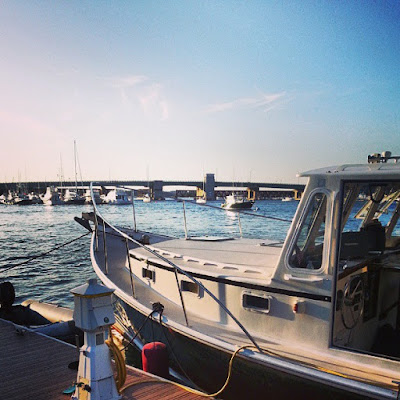 We walked down to the harbor to get our bearings on the location of the festival and to cool off from the summer heat. 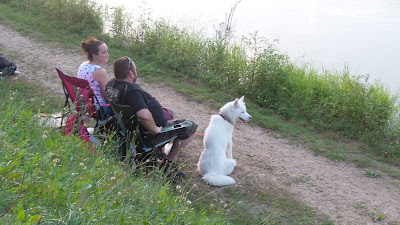 We arrived at the pond in plenty of time with trash bags as seats and smelling like bug spray. We sat on a hill for the best vantage point. There were kids, dogs, parents, photographers, picnickers, you name it. Everyone was out on this beautiful night, the last hurrah of Summer. 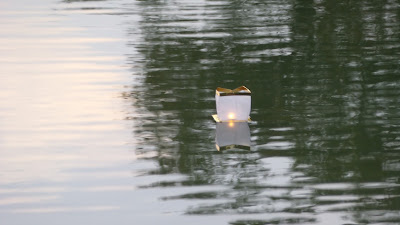 Someone couldn't wait and set theirs off before dusk. It was beautiful and I eagerly anticipated the full illumination. 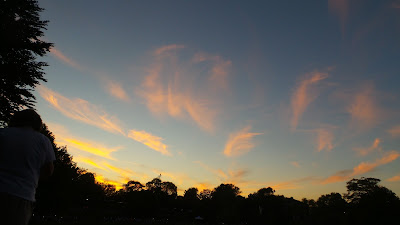 The sunset was gorgeous. I watched for a sign on this special night, maybe some clouds that looked like angel's wings or a heart but nothing. I still found the beauty in it. 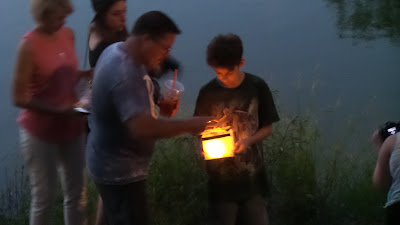 This is the time of night that gets difficult to photograph. I did not want to bring my tripod so I settled for less than perfect images. 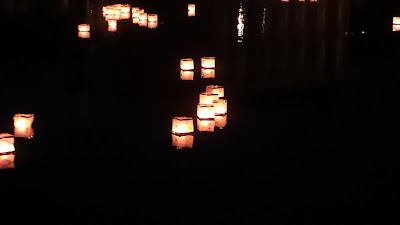 At first just a few lanterns were lit and they were floating so gently across the pond. The lantern lighters wore glow light necklaces so we could see them. 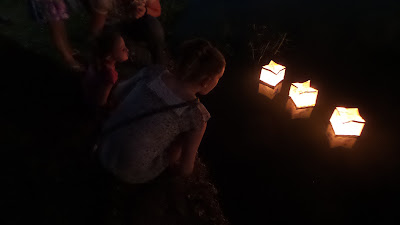 I found more success photographing people who were illuminated by the lanterns. 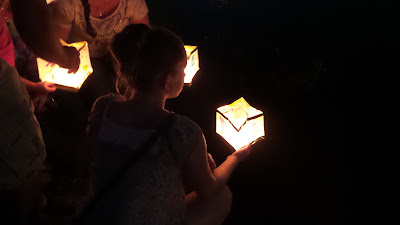 Some of the lanterns looked like stars if they were not completely opened to form a square. They were made of foil and vellum paper. 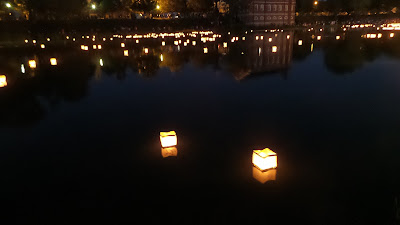 We saw more and more lanterns placed in the water and it was pure magic. We heard chimes through the microphone and music. It was calming and so peaceful. You did not need to speak but just watch and wait for the lanterns to float by. 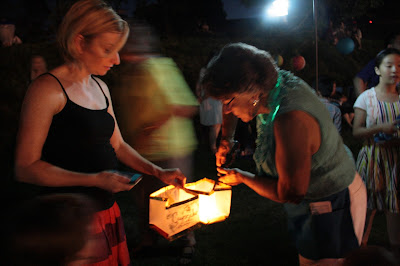 The later arrivals had their lanterns lit and added to the magic. 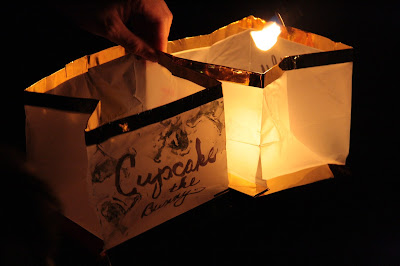 Favorite pets were honored by children. 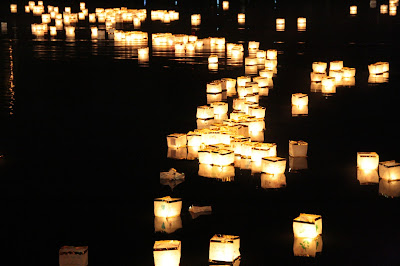 The lanterns were taken by the current and floated clear across the pond to the other side where we were sitting. 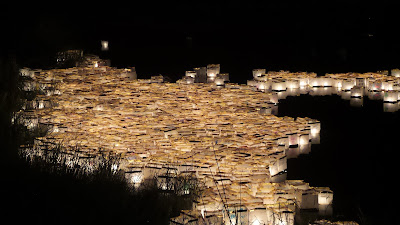 Later in the evening, it became a log jam and volunteers pushed the lanterns out of the grasses on the banks of the pond. 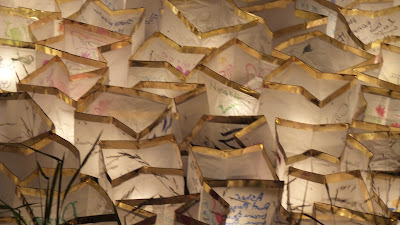 I was hoping to read some of the messages but it was too difficult. 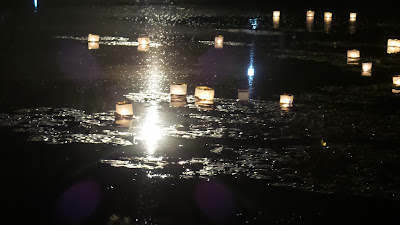 At the end of the pond we saw lily pads and the lanterns were riding on them. Spectacular!
This evening was so visually stunning and thought provoking as I remembered my Mom who passed away this year. I also thought about friends and other family members whom I had lost in previous years. It was a beautiful memorial to them all.
Email Post
Labels: illumination lantern festival lanterns Newburyport Ovarian Cancer Awareness

Anonymous said…
Oh, Elaine...How beautiful!! And, such a special way to remember loved ones. So very glad that you shared this wonderful evening with us! Hugs ~ Donna
September 7, 2015 at 11:23 PM