Shipping out of Boston- a quick weekend visit from L'Hermione 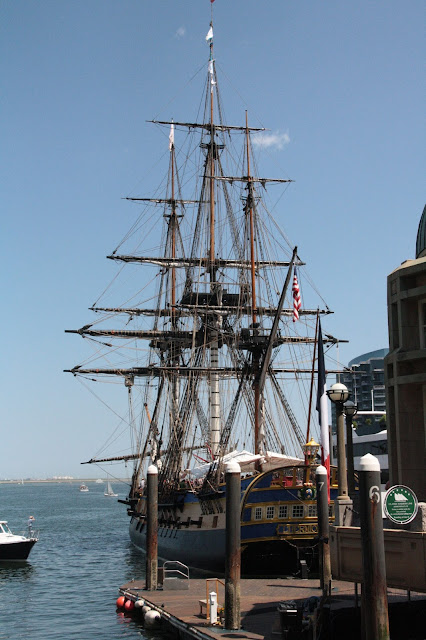 This post is a little late as are most of my posts lately. Still, I wanted to share some of my favorite Summer memories with you.

In July, my sister and I went to Boston to see the Hermione, the exact replica of the frigate that brought the Marquis de Lafayette to America in 1780. This fantastic ship took 28 million dollars and 17 years to build. 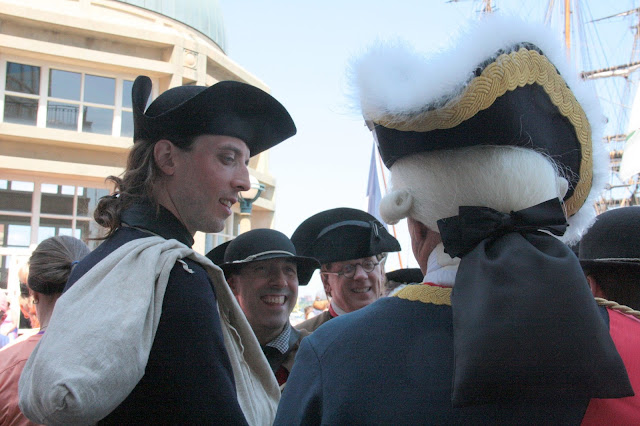 Not only was the ship impressive but the crew and officers were looking mighty fine in their period attire. 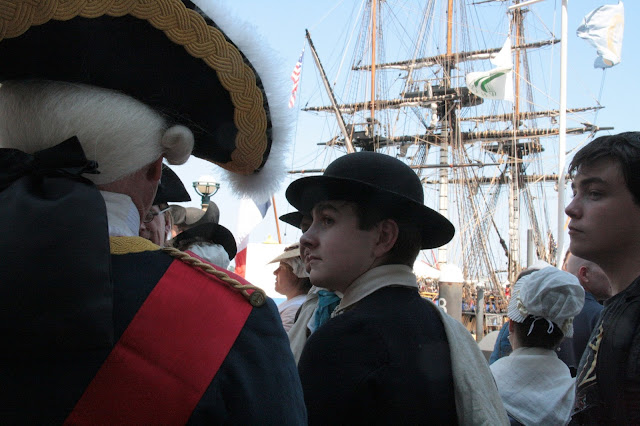 I wished we had arrived a bit earlier for the event to see the ship under sail. The Mayor of Boston officially greeted our guests to our city and the bells were pealing at the Old North Church . 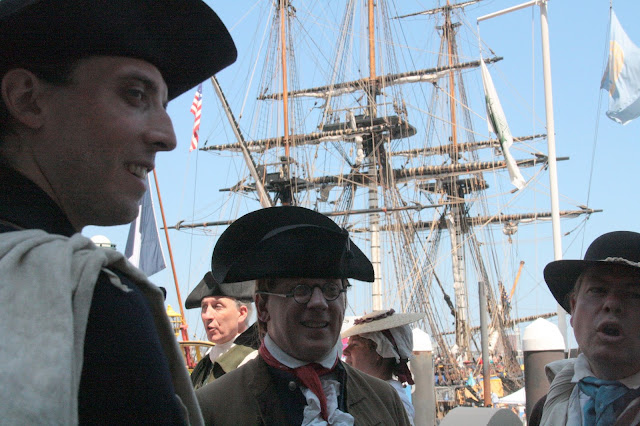 I felt sorry for everyone who wore wool on a hot Summer day. I was glad we did not stand in line for 4 hours to tour the ship. We did not need to get that up close and personal. Besides, I have a trusty zoom lens. 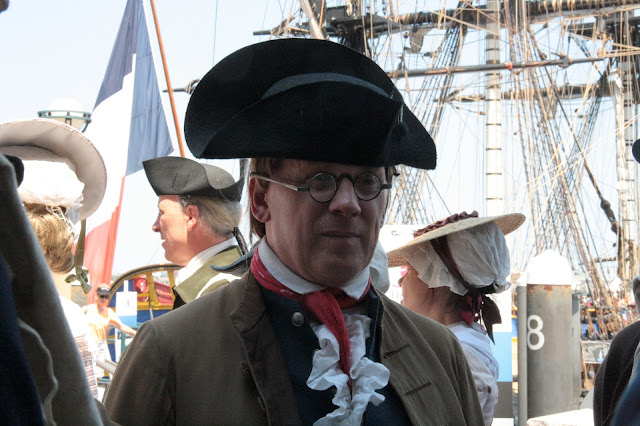 I enjoyed looking at all the period clothing. I love military jackets even in modern day dress. 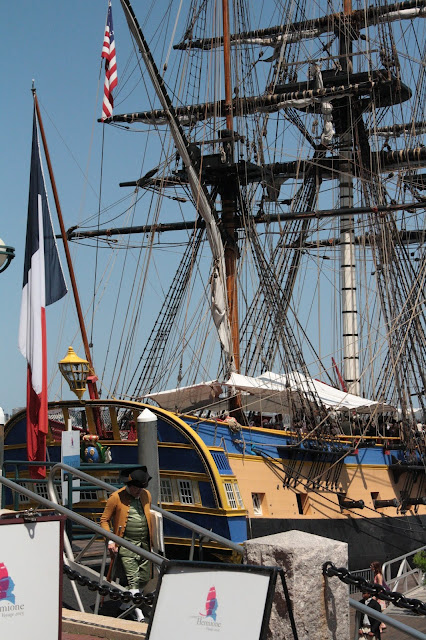 The ship was spectacular and to think it took over 17 years for the French to build it. We actually met a man from the area of France where the ship was built. He saw the progress over the years. 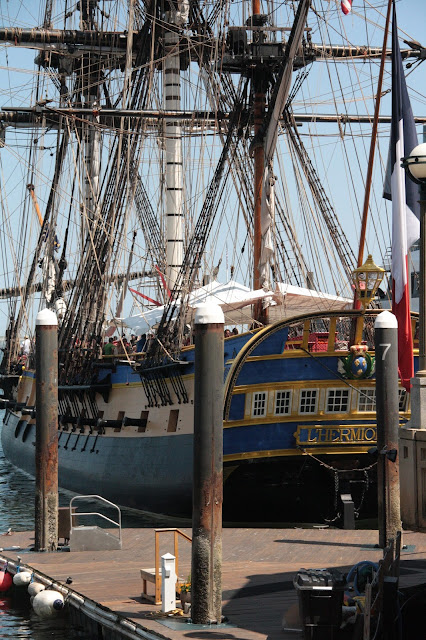 I wish I had done more adjustments for the bright exposure of the afternoon sun. My photos are washed out. This ship was colorful. 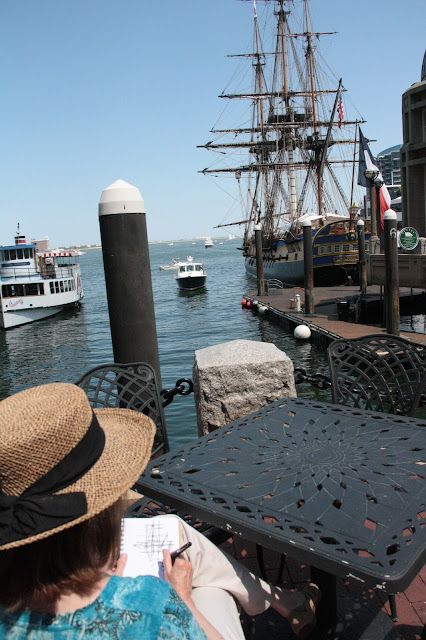 My sister took the opportunity to put on her artist's hat and sketch the beauty before her. 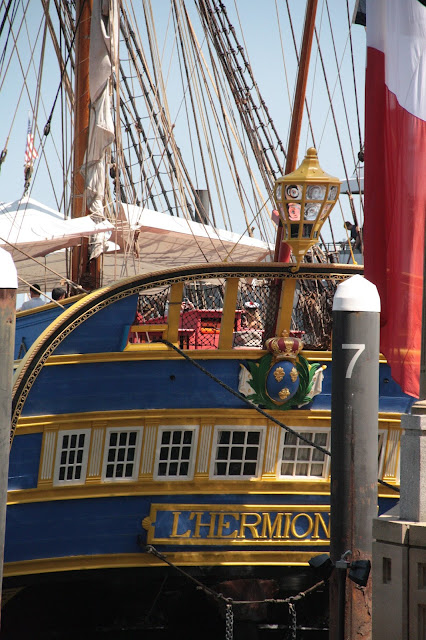 Unfortunately, the ship was only in port for a short time. 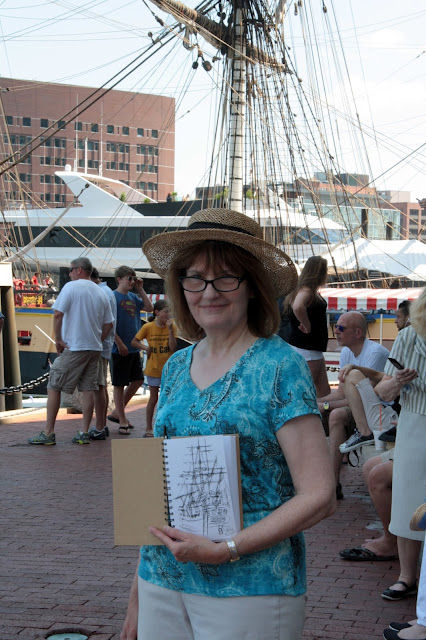 I asked my sister to pose for a photo with her sketch. 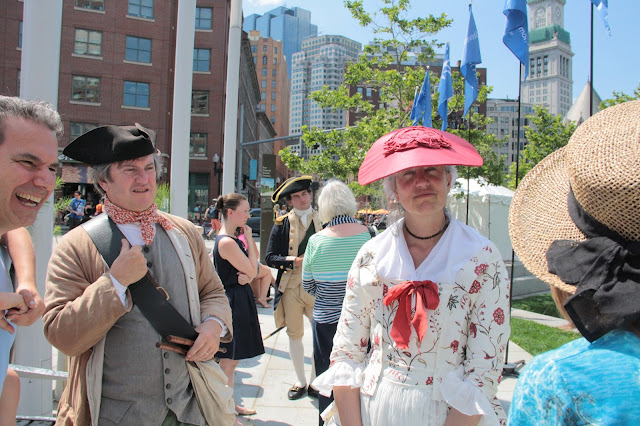 My sister had some friends who were part of the Boston ceremonies and their son Adam is portraying Marquis de Lafayette. You can see him in the background. 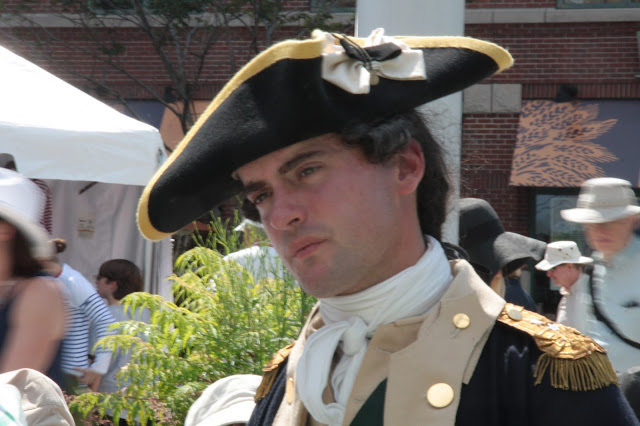 This is Adam Hodges Leclaire. Adam learned how to sew his own period attire and climb masts as part of his preparation for the role. What an opportunity to sale from France to the Eastern Seaboard on this fantastic ship! You can read more about Adam here. 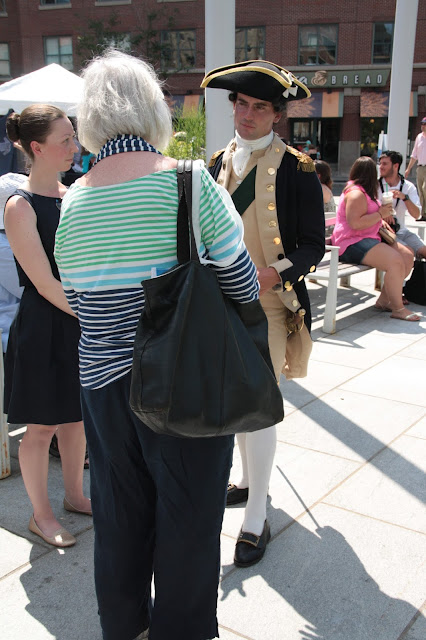 Personally, I think his attire was the most spectacular. 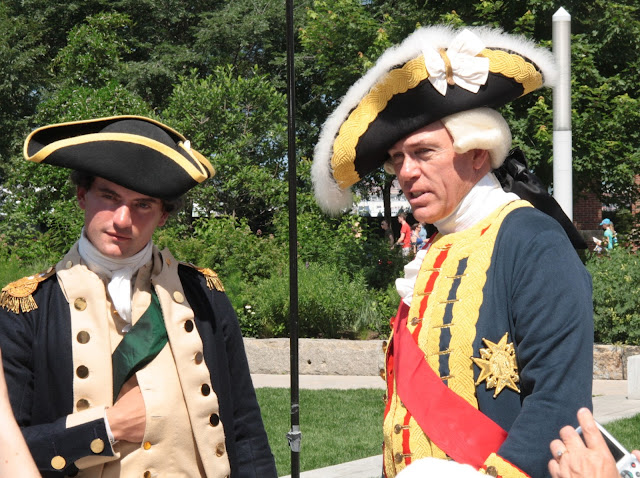 And here is the Marquis de Lafayette with George Washington? Possibly. 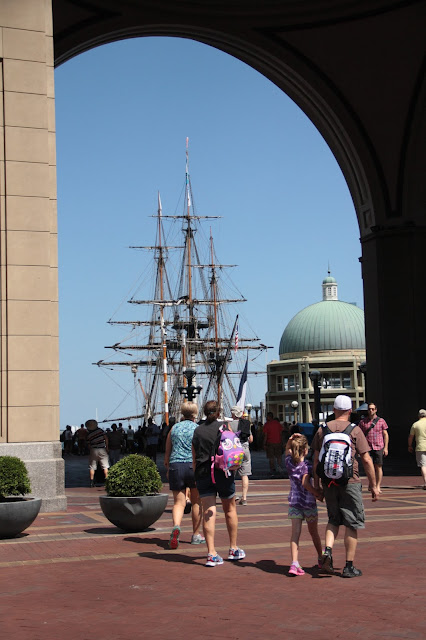 Standing outside the Rowe's Wharf Hotel, we admired the beauty of the L'Hermione. I am so glad we were available to visit Boston that weekend. It is a wonderful memory of Summer 2015.

Blondie's Journal said…
This looks so fun and I can see you had the perfect day weather-wise!! Yay! My husband would love something like this---he is the master of all things historical! I would be happy to be near the water!!

Have you ever been to Bar Harbor? Thinking of a fall respite there.

Elaine said…
Hi Blondie. No I have never been to Bar Harbor, Maine. It's about 4 1/2 hours from Boston too long for a day trip. It's on my list of places I need to visit. Looks beautiful. iT would be great if you find yourself in Boston on the way to Maine, we could finally meet!
August 10, 2015 at 12:34 AM

Salmagundi said…
What an experience for all participating and those observing. Beautiful pictures! Sally
August 10, 2015 at 11:54 AM

artistswriter said…
Thank you, Elaine! For such an amazing article/experience!! I am so imporessed with Adam. I read the Boston globe article, too!! And yes, you MUST go to Bar Harbor! Even though I'm from New England, too, I had not been there until 8 years ago, when we were on a cruise from Quebec to Boston (up the St. Lawrence river through the Northumberland Strait, and down the New England coast). Bar Harbor, especially Acadia National Park, is spectacular. You will be interested in the schooner, the Margaret Todd Windjammer, that sits in the harbor. Also, be sure you sign up for one of the lobster bakes. There are lots of them. Of course you live in New England, so maybe have lobster more often. It was a fantastic treat for me!

And yes, Shelia, you ARE lucky to live in New England. I was born and grew up there, but alas my husband's work took us to mid America! My heart is, though, and always will be in New England! Continue to enjoy it!! Jane xoxo
August 10, 2015 at 12:12 PM

YarnyDragonfly said…
Thanks for sharing this adventure! The ship is amazing and so are all the historically costumed people (enjoyed reading about Adam, very interesting!). Great photos too! It looked like a great day.

P.S. Definitely put Bar Harbor and Acadia National Park on your list (and having tea at the Jordan Pond Tea House!). I especially like to go in the winter - yes, you heard me right! Maybe not during a winter like the last one we had, but when there is no snow in the forecast and no snow on the ground, the park is open and you have it ALL to yourself. During summer it is packed, but still beautiful! :)
August 11, 2015 at 10:36 AM