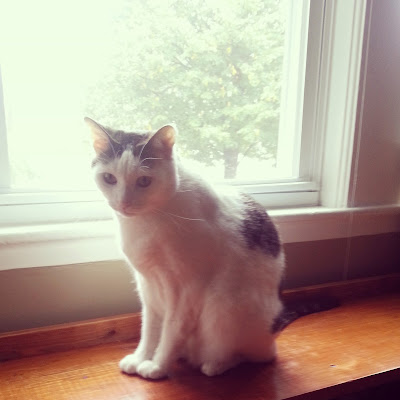 Does this cat look remorseful to you? Well, he better be remorseful. He's on the timeout bench for the second time in a week. Yes, Mr. Percy has been very naughty. He is like a bull in a china shop, full speed ahead all the time and wrecking anything in his path.

The cable is out now. I chatted with Verizon twice and I spent a long time trying to figure out the problem. The first time it took the guy 20 minutes to look up my account. He had my name, address, phone number and back up number and still could not find my account. Eventually the online chat timed out and I got disconnected.

The second time the guy was competent. He found my account right away and we ran a series of tests on the system. Still no signal. I am going to have find my original remote for my TV. I only use the Verizon one so I am sure it is going to take me a while to find the original one from 2008. Yikes! 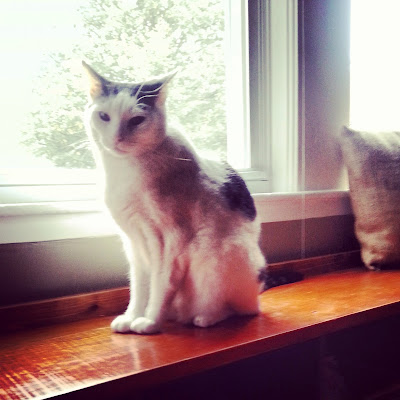 And here he is giving me that I am the boss here and you better get used to it look. He's on the timeout bench here because he ate some of my food.

So here's the story.  I was eating some very delicious ravioli for dinner. Spinach and scallion that I bought at the Farmer's Market. I was thinking I should give myself another helping so I put two more in my bowl.  I was watching TV and about to eat the two I had left when I heard a loud crash in the kitchen. 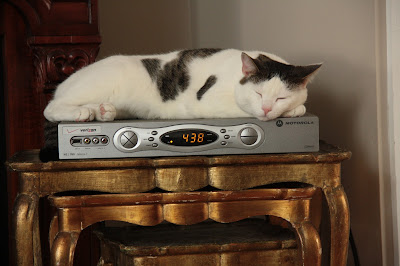 Percy was sleeping like this on the cable box in the living room.  I ran into the kitchen and the trash had fallen over. Either I overloaded it or another kitty was trying to find something good. I was there for only a second. When I came back, I saw Percy sitting in the hallway licking his chops.

Oh no! I went back to the ravioli bowl and the two raviolis were intact. I wanted to eat them but I figured Percy had licked them so I threw them out. Actually if he had eaten the scallions he probably would have been sick. Cats can't have onions. Their systems can't break down an onion. 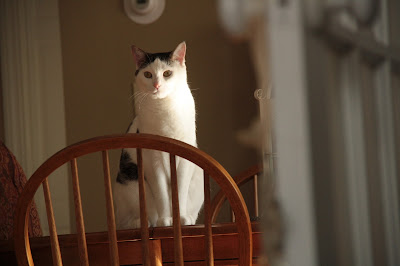 Anyway, he is just fine. He's used up two of his nine lives in a week.
Right now, he is sleeping on my feet and lightly snoring. How do I know he is snoring? Because the house is so quiet you can hear a pin drop! There is no TV, so no noise.
He better help me find my old remote.
Email Post
Labels: Cat naughty Percy

weaverpat said…
LOL! I don't believe a word of it! Wrongly accused!
He is innocent! Just look at that face.

Really, having many cats of my own, I can sympathize. They do have a way of getting themselves into the worst kind of situations. That said, I could never live without cats.
September 1, 2015 at 8:50 AM

Salmagundi said…
Tell Percy to find the remote for you. Just this week, my son lost something and he discussed it with one of his cats. The next morning it was in the hall outside of his bedroom door. I kid you not!!! Sally
September 1, 2015 at 10:19 AM

Cat and DOG Chat With Caren said…
Awww poor Percy!!!
Maybe he wants you to change providers? lol!!!
Also, he likes that box because it is probably warm. My husband would have a fit if Cody did that!
You should check out the amazing cat tree we have on our blog...Percy would LOVE IT!!
catchatwithcarenandcody
September 1, 2015 at 11:05 AM

Anonymous said…
Oh, no! Looks like he is skating (or sliding, skiding and eating) on thin ice. Hope he has learned his lesson, especially since he only has 7 lives left. "Hope you get your cable back" hugs ~ Donna
September 1, 2015 at 1:03 PM

Nellie said…
Poor Percy! I'd say you have a very talented cat if he will actually stay in time out! We never had a cat we could convince of very much.

Your cable woes remind me a bit of our Internet server problems - which we hope we have now solved. Hopefully you will find that remote - and that you will be able to have cable service again.