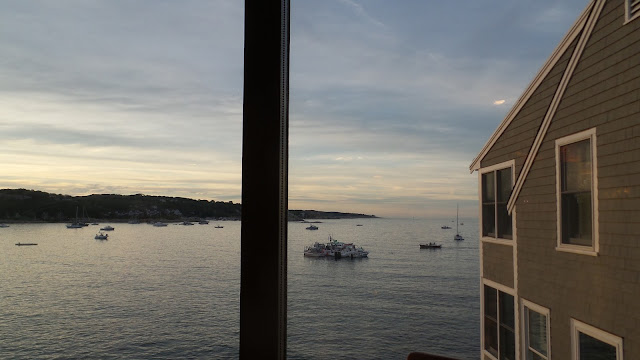 If you are a follower of my blog you know I am infatuated with illumination nights. I have been to several. My favorite is the Grand Illumination Night on Martha's Vineyard. It is spectacular and not to be missed. The Ocean Park Illumination Night in Maine is quite nice too. That one spills over onto the beach.


This Summer, my illumination night was in Rockport. We started the night with dinner at Brackett's Oceanview. Someone had lobster. Not me, I went for the clams. 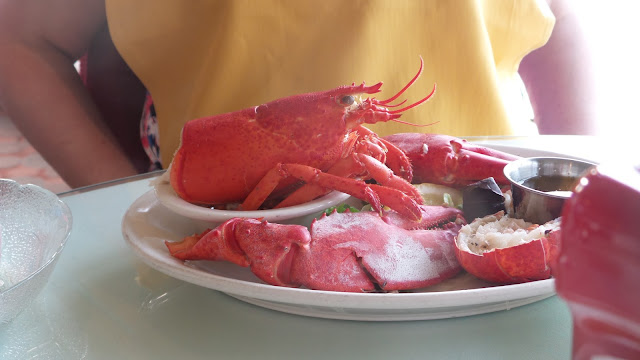 I don't eat lobster this way. I much prefer a lobster roll. 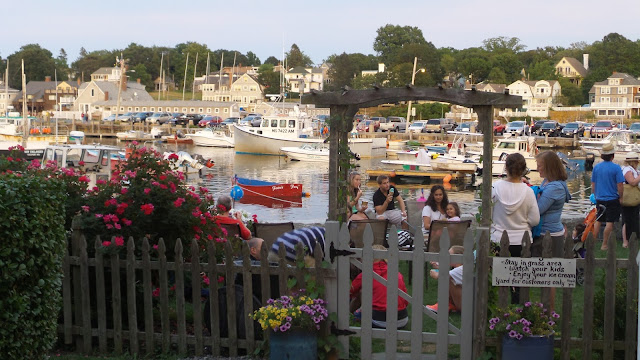 The weather was perfect. It was not too hot and there was a nice breeze. Many people dined outside. 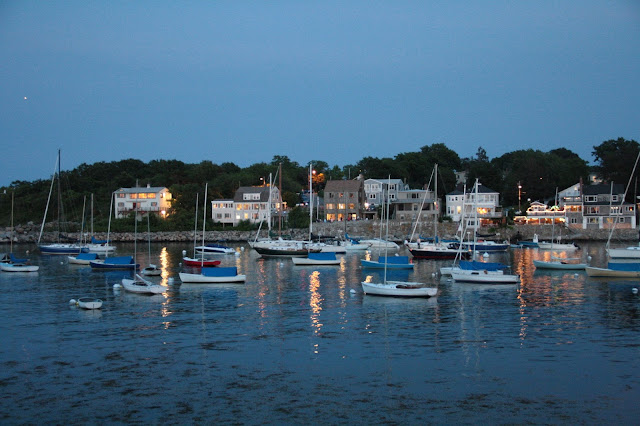 We sat on the deck of Helmut's Strudel Shop as the sun set. My sister asked me to take a photo of this scene as it would make a lovely painting reference. I could have stared at it all night while I ate my strudel. 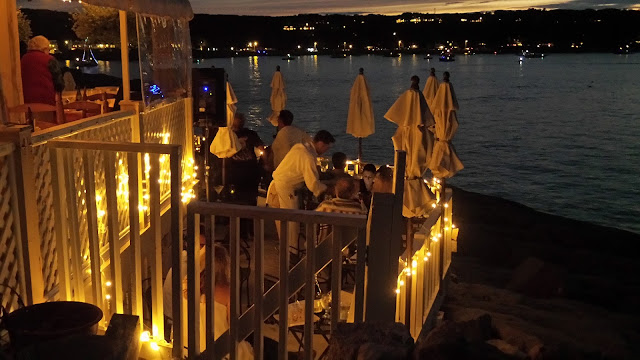 We walked to the end of Bearskin Neck. This scene at the restaurant My Place By The Sea made me think of a painting. Now that would have been the place to watch fireworks while dining. Maybe next year. 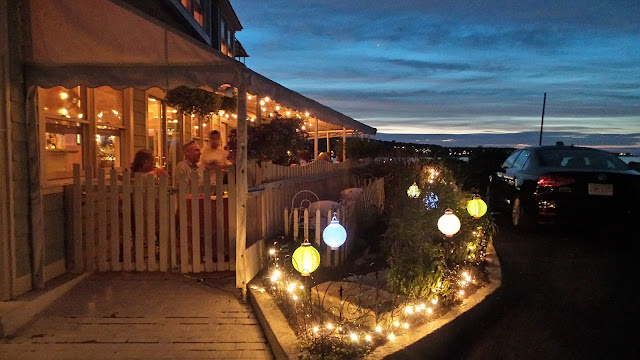 Another shot of My Place By The Sea. Some lanterns in the garden and natural illumination in the sky. 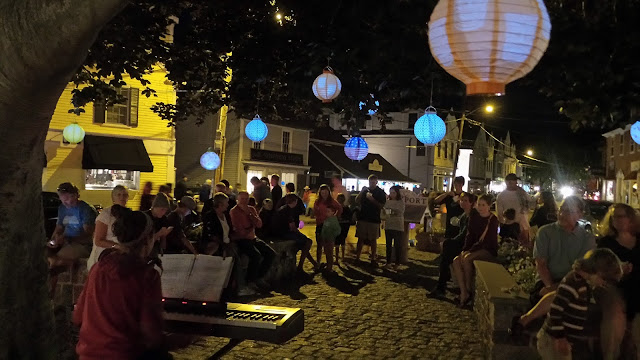 Illumination Night was in full swing downtown. There were musicians and cobblestones and lanterns. So very cool. Everyone was having a great time. 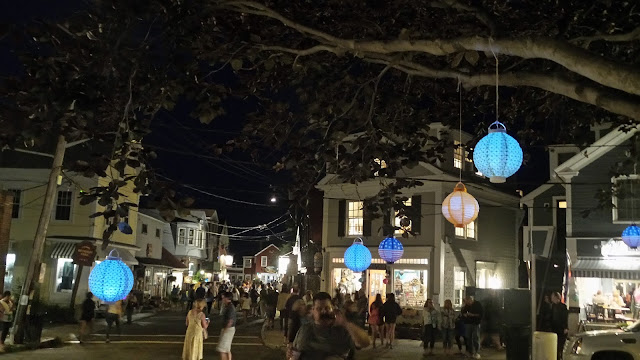 Another view of the downtown. This gives a glimpse of the architecture in the area. 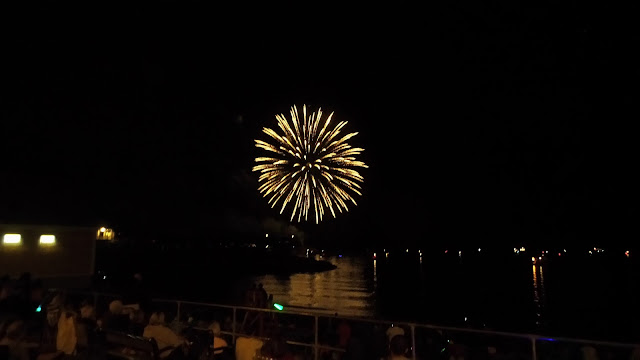 And then the fireworks were launched off the pier. We lucked out and found a perfect parking space.  We stood by the car and watched the show. It was fantastic. Someone was launching sky lanterns before the fireworks so it was a double illumination.  This was my best shot. I did not bring a tripod so all my photos are slightly blurry. 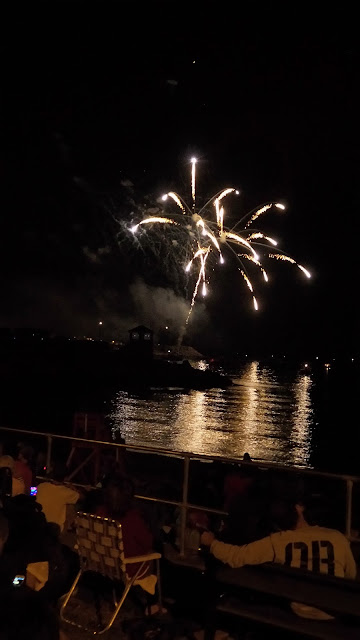 I still think the photos capture the essence of the evening's illumination. 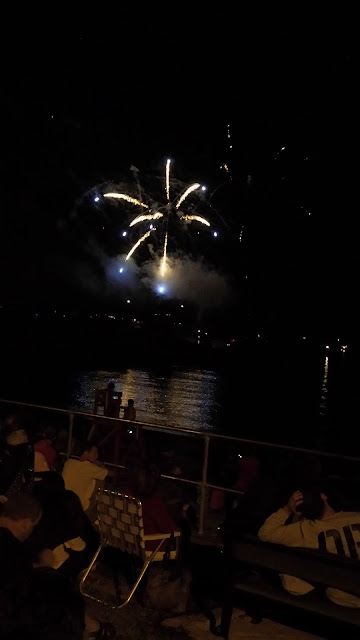 We were discussing our favorite kind of fireworks. I like the fizzly ones.
Email Post
Labels: Brackett's Oceanview fireworks illumination night lobster Rockport Rockport Illumination

Erin | Bygone Living said…
I had no idea other places had Illumination Nights! How beautiful! I've always wanted to visit Rockport. One of my fondest memories was participating in MV's Illumination Night two years ago; I actually started to tear up it was so beautiful.
August 17, 2015 at 10:29 PM

Elaine said…
I agree Erin. The MV illumination is breathtaking. I could not believe my eyes the first time I attended.
August 17, 2015 at 11:08 PM

Salmagundi said…
Thanks for your pictures -- I always love to see a touch of New England! We don't have illumination nights here in the west -- must be the lack of ocean as a backdrop. We do have hot air balloon glows, which are colorful and beautiful. Take care. Sally
August 18, 2015 at 10:30 AM

Dawn said…
I eat my lobster (and crab) plain with no butter. I don't want to take a low cal food that tastes good on its own and add ingredients to make it high calorie (lobster rolls or crab cakes).
August 18, 2015 at 11:34 AM

Anonymous said…
Oh, this looks and sounds like a wonderful event!! We don't have anything like this down here (Coastal Alabama), that I know of. Your pics were all lovely and my favorite fireworks are the ones that look like a weeping willow as they fall! Thank you for sharing this illuminating evening with us. ~ Donna E.
August 18, 2015 at 7:17 PM

Donna said…
Elaine, I have not been to Rockport this year, or last. I miss it so much and loved being able to feel like I was right there through your photos (which are always so beautiful).
Thank you so much for your kind words on our Tiger girl. She was our reliable, quiet girl who just hung out on the bed in our 'studio/office' so she didn't get as much blog time as Baby, but because we hung out in this room together every day, her absence is so noticeable. I had a very hard time coming in here the first week after we lost her. I know you understand as you are a kitty lover just like me. Again, thank you for your sweet words of comfort,
Donna
August 19, 2015 at 11:54 AM

Blondie's Journal said…
Oh, Elaine...this looks like so much fun, the pictures capture the excitement and fun. I think you are so lucky to live in the area you do, near the coast, in New England (that's lucky enough), Among so much beauty and history and great traditions. Sigh.

Hey---I've been dreaming of a vacation in your area for quite awhile. Recently ran into some people from Maine and they liked our curiosity in checking out Bar Harbor. Any thoughts on that?