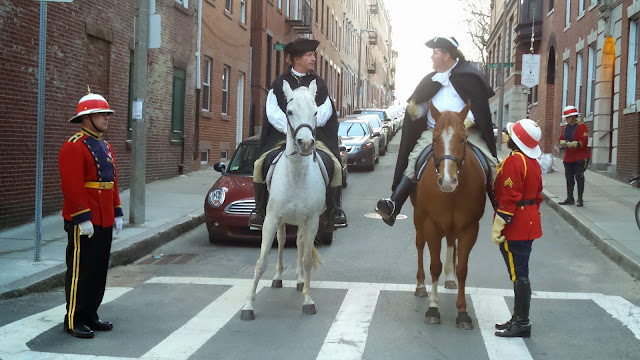 Well hello. It's me the absentee blogger. I am so sorry for the lack of blog posts lately. The good news is I have been keeping busy with some really fun events and I will take you along with me through my posts. So there is lots to talk about in the next few weeks. 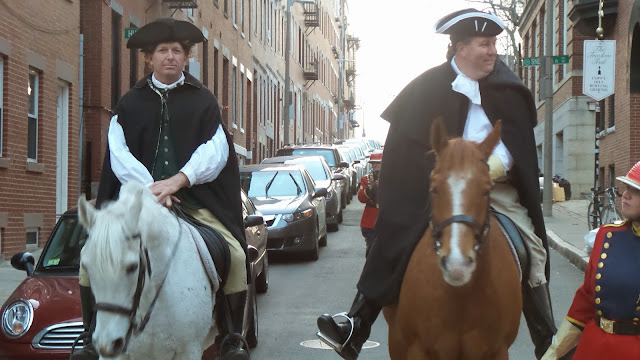 Prior to the ceremony, we spied reenacters who would later ride by the church. Surely you recognize Paul Revere and William Dawes. They saw the two lanterns in the belfry of the Old North Church and rode through Middlesex towns shouting the warning, "The British are coming!" 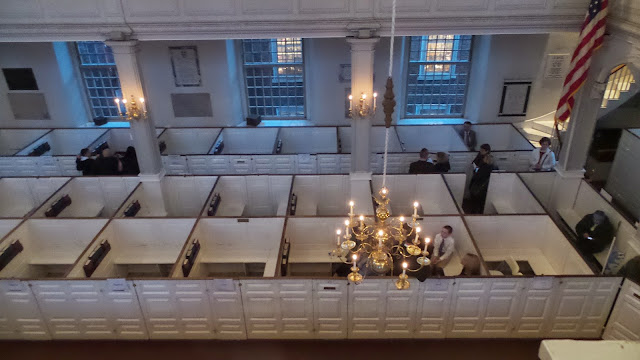 Single pew seats were quite expensive so my sister, our friend Debbi and I opted for the balcony seats. We had a nice overall view. 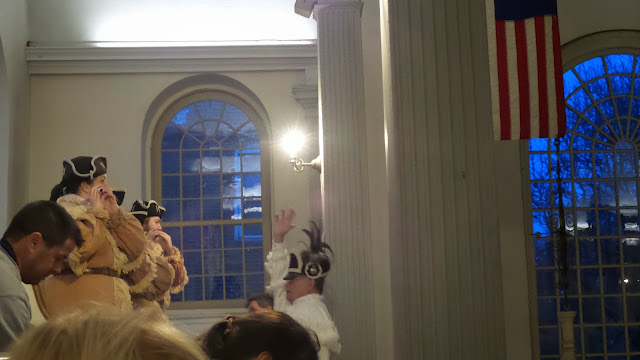 Also, we had a wonderful view of the 1st Michigan Colonial Fife and Drum Corps. The beating of the drum was music to my ears and went right through my body, building the excitement of what was to come. 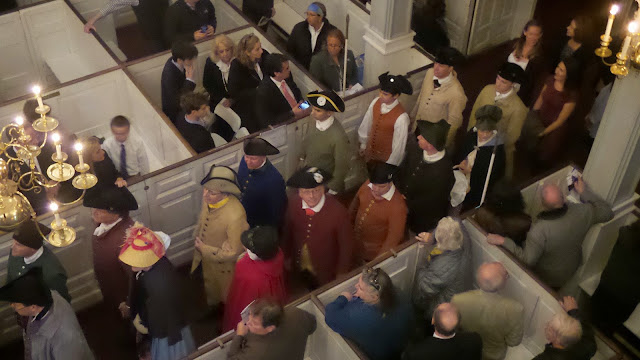 Minutemen from various towns processed in the church. 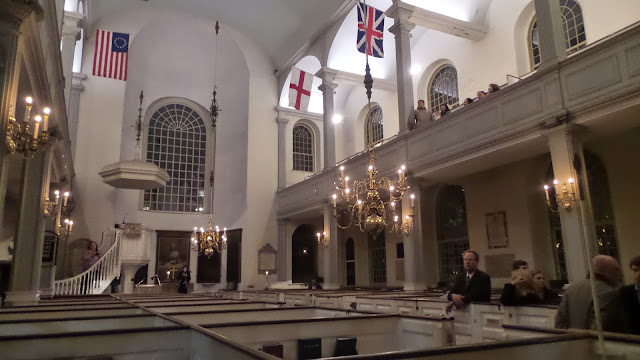 The church is stunning and it is overwhelming to me to think of the history associated with it. The bells were rung before the ceremony. Just beautiful! 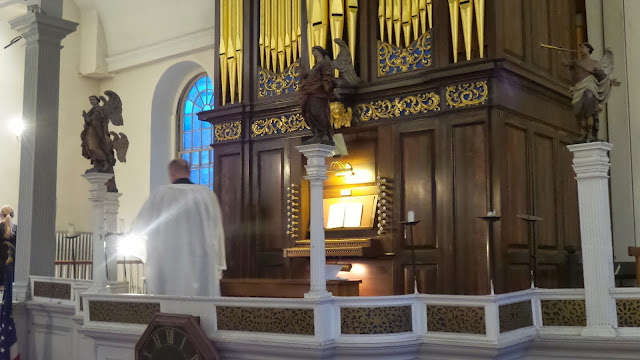 Such a spectacular organ, and we were sitting very close to it. I really enjoyed my vantage point. 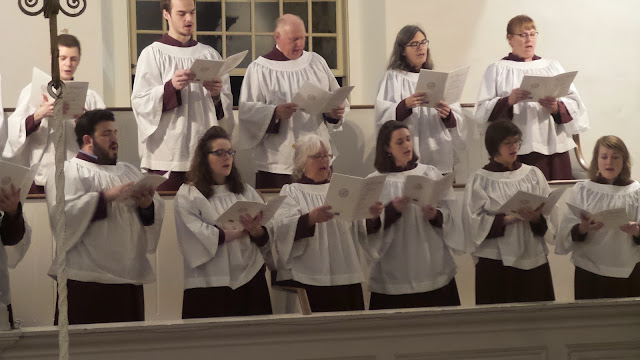 The Old North Chamber Choir sang a number of songs including America and America the Beautiful. It was so poignant. 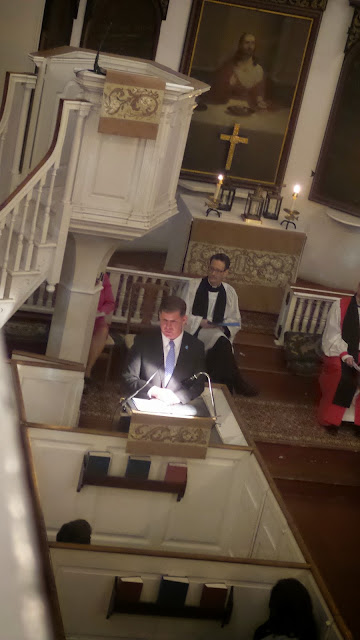 Our new Mayor of Boston, Marty Walsh, was the keynote speaker. The poem Paul Revere's Ride by Henry Wadsworth Longfellow was read. I had to memorize it for school perhaps you did too. 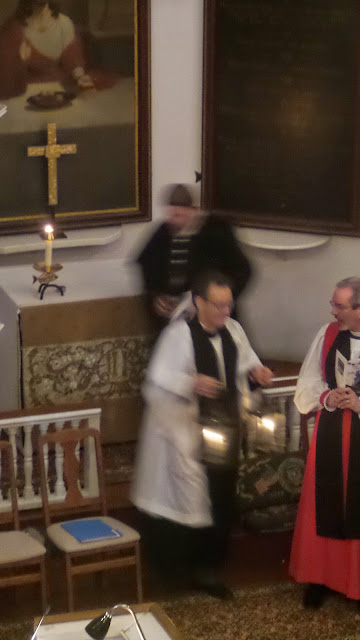 The two lanterns were lit and hung in the steeple. 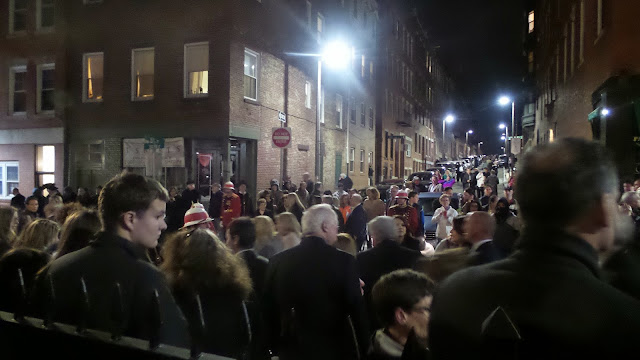 When we exited the church, a crowd had formed on Salem Street and surrounding streets in the North End. 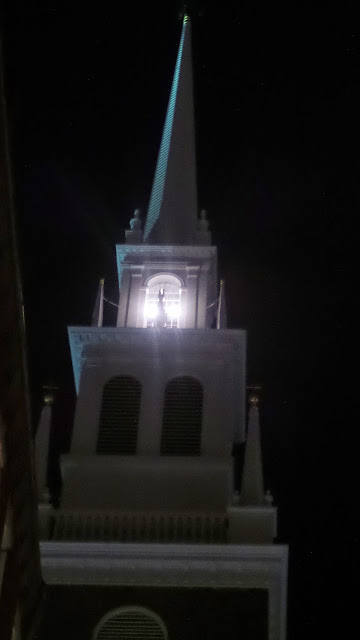 We saw the two lanterns hanging in the steeple and then Paul Revere rode by on his horse. I guess he saw the lanterns too. 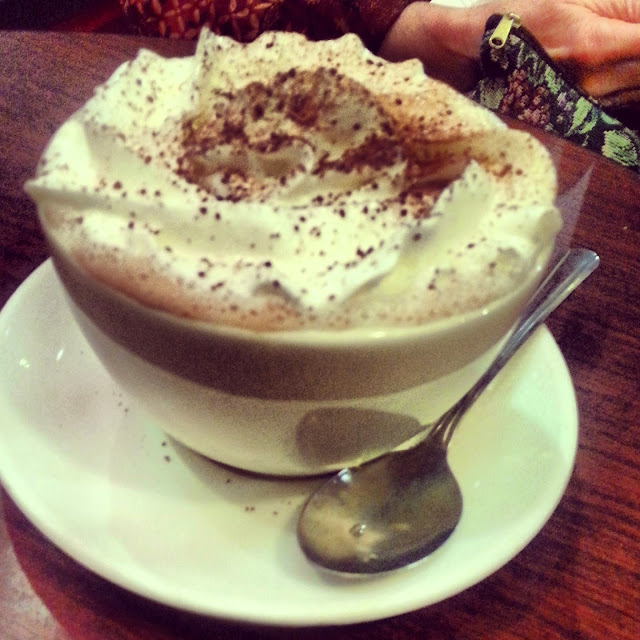 The North End of Boston has no less than 6o restaurants lining it's streets. We walked around the area on our way back to the subway at North Station. We found a nice little café and had a caffeination break. This is my sister's hot chocolate. 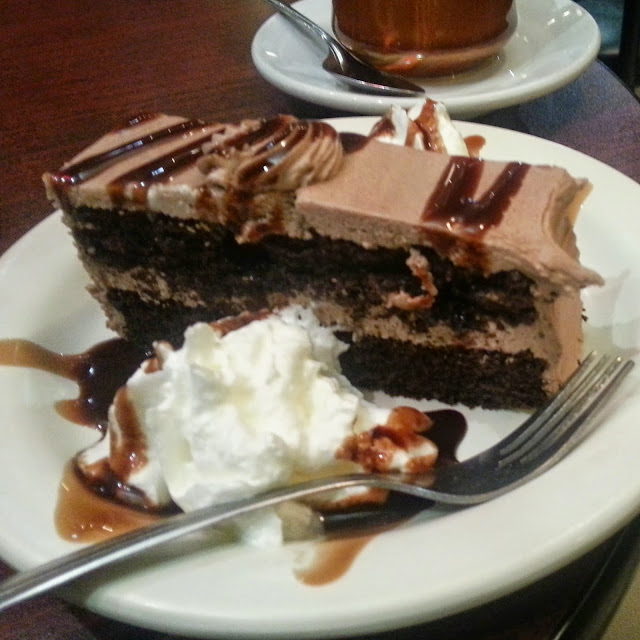 I could not pass up the chocolate mousse cake. The North End cafes are known for wonderful coffees and desserts. Parking is difficult as many of the streets are narrow and one way. It is so much nicer if you take the subway in as we did. 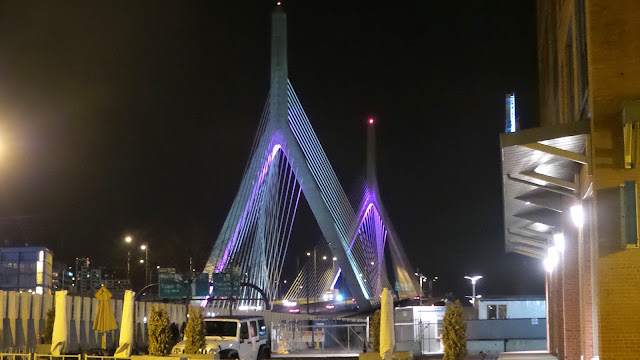 We decided to take a particular route back to the subway so we could see the Zakim bridge illuminated. I wanted to snap a photo. It is illuminated with many colors of light so it changes from blue to red to purple to yellow. 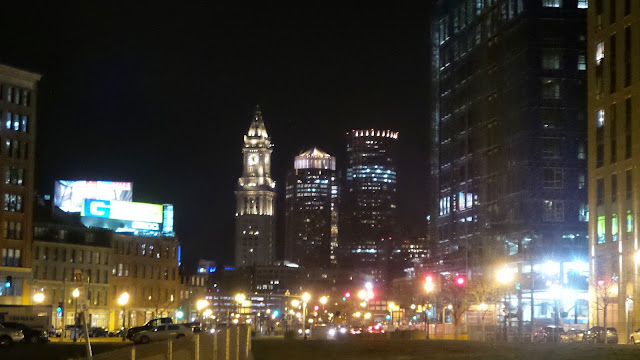 And the skyline was as fantastic as always as we approached our North Station subway stop.

artistswriter said…
Great tour! Lots of memories. I distinctly remember the pristine white beauty of the Old North Church! They took us to see it as kids from school, on a bus! Probably you, too! Even though I live far from Boston these days, I just re-read Longfellow's poem on the 19th of April! The Chocolate mousse looks to die for. Good choice! Thanks for sharing! Jane xo
April 27, 2015 at 10:33 AM

Salmagundi said…
Years ago I did an embroidered sampler with the Old North Church on it. At the time, I did a little research and learned the story. Those of us in the West only learned about cowboys and Indians in our grade school history classes. Don't know what happened to that sampler, but thanks for the memory. Sally
April 27, 2015 at 11:13 AM

Blondie's Journal said…
What a spectacular evening...the pictures inside the church and the beautiful choir sent shivers up my spine. I do remember this part of Boston from my first visit, I was fascinated! Your little treat afterward gave me an instantaneous sweet urging!!

I've been remiss on visiting, but I see you have been busy, too. However, I think you've been having more fun than me! :)

Castles Crowns and Cottages said…
WHAT FOND MEMORIES YOU BRING UP! My husband and I frequented the North End every lovely weekend, winter or summer! The North Church was a gem of a place to walk into the pages of history and then to indulge in the North End's fabulous Italian fare. WHAT GREAT PHOTOS! Those sweet horses in the beginning...give me a horse any day.