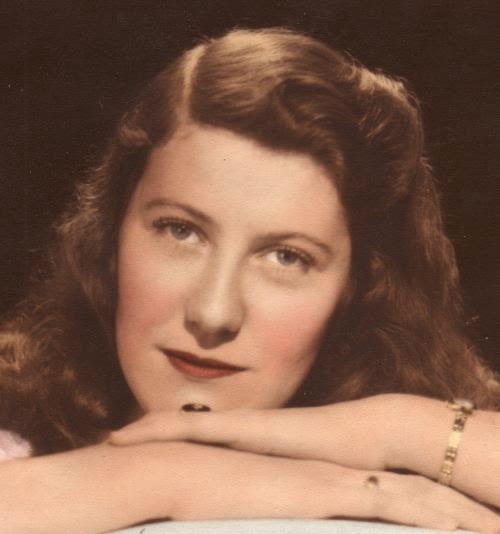 I am writing the blog post I have been dreading. Dreading it even though it has been 10 years in the making.

My Mother passed away on January 19th, 2015. She left us peacefully with my Dad at her side, exactly where he had been for their 63 years of marriage. He was not scheduled to visit her at her nursing home until that night as my sister and I were going to visit Mum on that particular Monday afternoon. But, he put his coat on that morning and told my sister he was going to see her. I got the call from my sister an hour later that she was gone. A friend told me my Dad knew because their hearts were talking to each other. I believe that is true.

In February 2004, my Mother had a massive stroke that robbed her of her speech and left her partially paralyzed. I often wondered why God let her survive so many years in a nursing home. Surely it would have been kinder to let her go to heaven immediately after the stroke. For me, the long goodbye was kinder.

We spent countless hours with her at the nursing home but since her stroke she was never the same. She wasn't the same person to me although she still had her stubbornness, flair for the dramatic, and sense of humor. How devastating it would have been for me to lose her 10 years ago when she was able to walk, talk, and go shopping with me.

I did not deliver a eulogy at her funeral but if I had I would have mentioned some favorite memories. At first, it was difficult to think of anything more than her illness. It had changed all of our lives for so long but recently more memories are breaking through. Happy memories or at least something more than the stroke and her years at the nursing home. Here are a few memories:

She was the worst photographer in the world. She once cut me completely out of my prom picture.

We used to go shopping every Saturday afternoon but first we went to Brigham's and consumed grilled cheese sandwiches and hot fudge sundaes with coffee ice cream.

She and I used to love to watch spy shows together. Probably why I am addicted to them now.

She let me drink coffee at age 9. She used to add lots of milk and sugar to it but it made me feel all grown up.

She loved animals her entire life. We bought a puppy in the parking lot of a shopping mall from a woman who had a basket of puppies.. We named him Murphy. We already had a cat at home which had arrived via the pro shop of my Dad's golf course. My Dad brought the cat home as a kitten for us to play with thinking it would go back to the pro shop in a few hours. My Mother told him he couldn't let us play with it and then take it away. The kitten was with us for 9 happy years.

She was the most stylish woman I know as evidenced by the old photos we picked out for the slideshow at her wake. I may post some of them later. Both of my parents were so elegant and well dressed.

Anyway, I know my Mum is heaven now. She can walk and talk and she is with her mom and her dad and her friends. As my sister's friend said, "Her entrance into Heaven is joyfully anticipated". I find comfort in that.

We've received such support from family and friends it has blown me away. I want to thank all those angels on earth who have made a difficult time easier. There are too many to name.

I am back to work and will soon return to blogging about my New England adventures. I hope you will come along for the ride.

Lynne (lynnesgiftsfromtheheart) said…
I'm so sorry for your loss. What a beautiful tribute. The anniversary of loosing my husband is around the corner, sending you lots of good thoughts and prayers.
fondly ~lynne~
February 2, 2015 at 11:09 PM

Laura B. Jenkins said…
My thoughts and prayers are with you and those who knew and loved your beautiful mother. I know you will miss her. You wrote beautifully about her and your fond memories of time together. Now, I know where your love of coffee started. I was about the same age when I was allowed by my mother to drink it after church.
Take care of your sweet dad...hearts talking to each other...so very dear.
xoLaura
February 3, 2015 at 12:09 AM

weaverpat said…
I'm so sorry to hear of your Mother's passing. The happy memories are the ones to keep so that she lives on in your heart. You so eloquently expressed your love for her. She sounds like a lovely lady and you are a tribute to her.
February 3, 2015 at 7:44 AM

Count Robot said…
Sorry for your loss. Her sense of humor, her caring, and her compassion are handed down to her wonderful daughters.

Jane Franks said…
What a lovely tribute to your mother. My sincerest sympathy is with you. I know how you feel about the good things coming back. My Dad passed away 4 years ago, and at first it was sad but then remembering so many wonderful things about our lives, and knowing he, too, is with the Lord in heaven now makes me rejoice and smile. I still miss him but have great memories and hope of seeing him again. You will miss your mom, too, but will be comforted by the wonderful memories and your future of seeing her once again. I, too, was allowed coffee at an early age, and loved iced coffee in the summertime. So glad you still have your Dad, and that will be more precious to you as the days go on. God bless you. Jane xoxo
February 3, 2015 at 10:17 AM

Joan said…
I am so sorry for your loss of your mother. Your post is eloquent and a beautiful testament to your mom and your relationship with her.
The photo of her is beautiful.
My deepest sympathies to you and yours.
February 3, 2015 at 11:01 AM

Unknown said…
Dear Elaine, This was a heartfelt sharing and so very special. I am so sorry for your loss. Sending prayerful HUGS.. Lori

Robin Larkspur said…
Deepest sympathies, my dear friend. I lost my mom three years ago, January 25th 2012 after a difficult illness..she was 96. She used to let me drink coffee too when I was 9, isn't that funny? I am sending you peace and blessings as you navigate these next months of mourning. Focus on the sweet, lovely memories, and remember her hugs and wonderful words. Hugs to you. Robin.
February 3, 2015 at 3:00 PM

Cat and DOG Chat With Caren said…
I am so sorry to learn of the passing of your Mother, having had a father-in-law who developed Altzheimer's after his wife passed and lived for about 5 yrs, I somewhat know what you went through. It is so hard to have a long goodbye...it is never easy, but watching someone who was once so vital, not being themselves, is so difficult.
Your mother would be so proud of what you have written and what fun and beautiful memories you have!!! Those can never be taken away.....your Mom isn't gone, she is one of your Guardian Angels now.
Sending you (((hugs))) and my deepest sympathy.
February 3, 2015 at 7:59 PM

Blondie's Journal said…
Please accept my sympathies...very heartfelt. Since I've known you, I read bits and pieces alluding to your mother in the nursing home...not fully aware of why. I see that it must have been a challenge and a very difficult time for your family. I feel so bad that she has passed. I liked reading your memories...it always makes out loved ones seem more close to us.

I am sending much love, prayers and heartfelt wishes that you find happiness in each and every day after this huge loss.

Salmagundi said…
Sorry to hear about your mother. I'm sure the bond you seem to have with your sister and father will help you through this time of transition. Keep your faith. Sally
February 4, 2015 at 7:59 PM

Val said…
I'm so sorry for your loss--and what sounds like so many losses along the way since her stroke. Your story about her allowing you to stay up to watch your show is precious. :)

Peace to you and your family, ♥

Donna said…
Oh, Elaine, what a beautiful tribute to your mom! I am so sorry to hear the news of your mom's passing. I so enjoyed hearing some of your memories of her, and chuckled at the one about her being the worst photographer, because my sister and I always joke that our mom was the worst. In fact, just today my sister put a picture on her FB page for Throwback Thursday that is mostly a building and windows with just the top of my sister's head at the bottom of the photo. My mom also passed from a stroke, although she did not last more than 7 months. As time goes by, you will remember the mom you once knew more and more, replacing some of the harder memories from the nursing home years. My thoughts and prayers are with you, your sister, and your dad.
Donna
February 5, 2015 at 7:21 PM

Ocean Breezes and Country Sneezes said…
Dear Elaine, your description of your mom was beautiful, she sounds like she was a fun loving woman who liked a bit of mischief!

It's amazing how all the happy memories come flooding back and the ill person that was mom fades quickly - that's how it was for me. I seldom think of my mom when she was ill, I only think of her when she was healthy.

Your happy memories will help to heal your heart over time. I will keep your dad, sister and you in my thoughts and prayers.
February 5, 2015 at 11:53 PM

Anne said…
I havent visited blog land for a while Chatelaine but this morning I felt the urge to pop in. I am so sorry for your loss. Losing your mum is so hard and I know exactly how you feel as I lost mine last year. I wouldnt ,for a minute, wish her back to her suffering as she was, only if she could come back in full health but like you i truly believe she is happy and healthy in Heaven. May God bless you and time is a great healer, I know that myself.Love Anne
February 21, 2015 at 3:48 AM