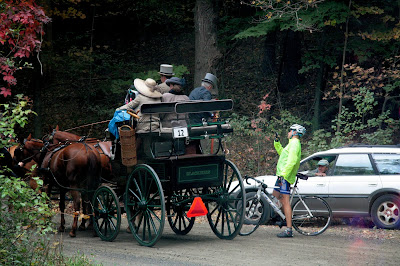 A friend posted on Facebook that the coaches were coming to Hamilton. I thought it might be Coach Bellichik of the Patriots so I read on. I thought it would be great to hear him speak. It turned out it was about historic horse drawn coaches that were going to visit the Myopia Hunt Club in Hamilton, Massachusetts. Even better!

I called my friend Debbi who has a love of horses and asked her to go with me. So I took a day off from work and we headed up to Hamilton.  After a quick Starbucks salted caramel mocha we headed to the Myopia Hunt Club. 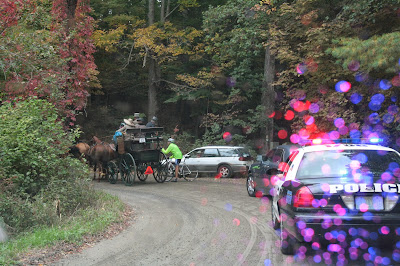 I am guessing the little jaunt to Starbucks cost us some time as the coaches were nowhere to be found at the Hunt Club. I had looked online the day before and I knew the route the coaches were taking to Appleton Farms. We headed down Cutler Rd and lo and behold....

We got stuck behind the coaches and the police escort. Those flashing lights can be really annoying! Then it started to rain, hard. And the horses pooped on the road, a lot!  I thought wow what a fun day! 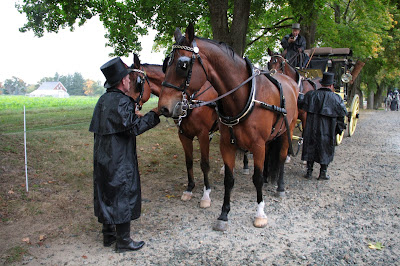 The coaches stopped at Appleton Farm and we were allowed to see the coaches and the horses and drivers. The drivers were friendly to us and were agreeable to photo opportunities.

At this point, I was in heaven. The setting was gorgeous. The foliage was fantastic. The horses were majestic and the coaches were spectacular. And then the downpour started. 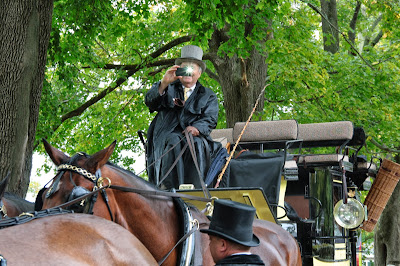 This coachmen wanted to take a photo of me taking a photo of him. I had to constantly hide my camera beneath my coat because it was getting drenched. I can't believe the skies opened up almost the minute we got out of the car! Oh well, we would not be deterred. We were going to see each and every coach. 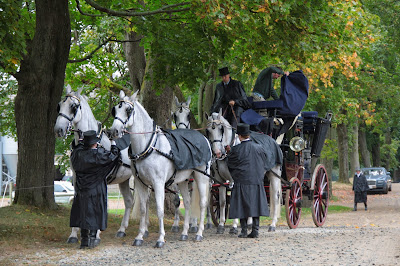 I especially liked the white horses. They had their raincoats on too. They took a rest while some of the drivers had a picnic. 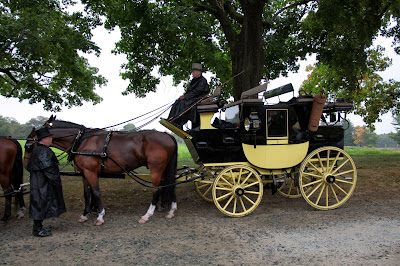 The coaches were so regal. And shiny! You can tell they were lovingly cared for. 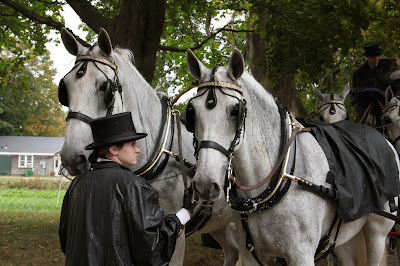 Everyone had their jobs. Some just stood with the horses as others were on the coaches. There was one accident. We saw an ambulance arrive and I wondered what was going on. We were told by a man who was there taking photos that one of the coachwomen had slipped on the wet step of the coach, fallen and got her foot caught in one of the coach's wheel's spokes. It was suspected she broke an ankle or leg. I hope it wasn't that serious. 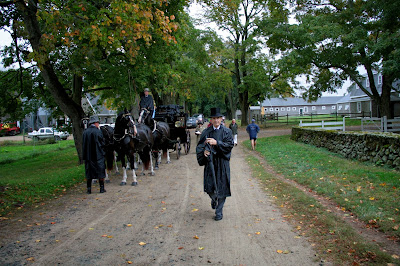 As I said the setting was breathtaking. Old stone walls, dirt paths, beautiful foliage. Such photo opportunities! I think I was overstimulated. 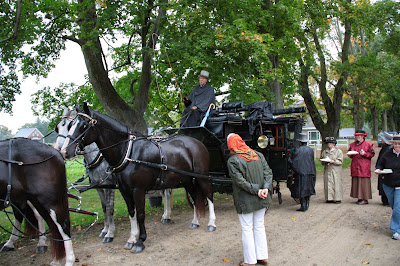 Oh look! The Queen made a special appearance just for us. It's fun hanging out with the horsey set. 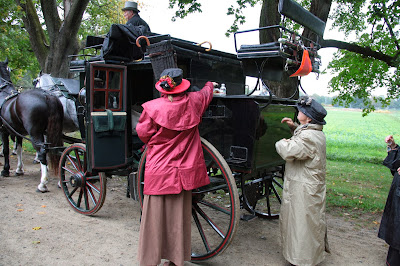 The ladies looked good even in their raincoats. I wish we could have taken a ride in the coach but we were just there to look. 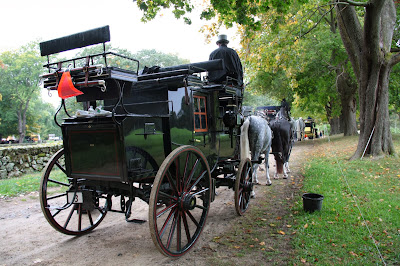 With horses and coaches surrounding me, I felt as if I were back in time or perhaps even on a movie set. 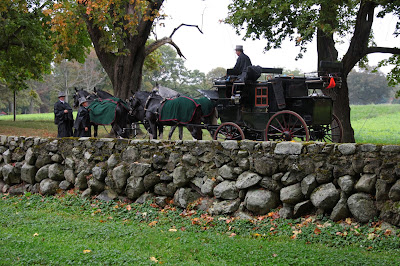 Imagine how old the stone walls are. This part of the North Shore is so beautiful! 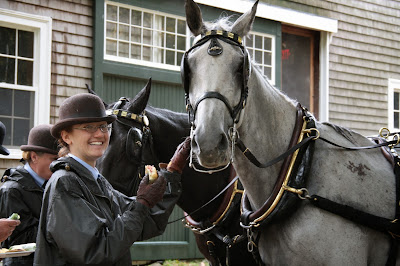 This woman agreed to pose with Ellie the horse. Funny I didn't catch her name but I remember the horse named Ellie. 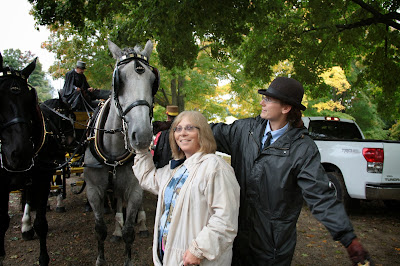 My friend Debbi posed with Ellie. Debbi's mother is named Ellie so this horse was the most special to us. 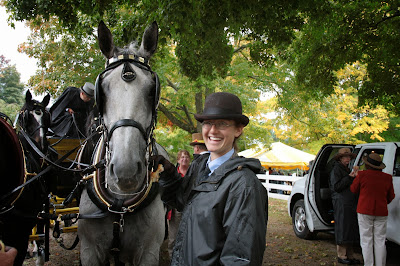 You have to admit, this horse is really beautiful. All the horses were so gentle. We were allowed to touch them. 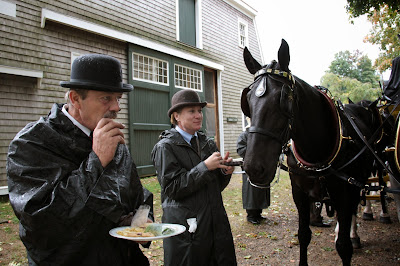 The picnic was actually a boxed lunch for the coachmen but a few of them had lunch under a tent.

This coachmen looked a little scary. He definitely could have been from another time. 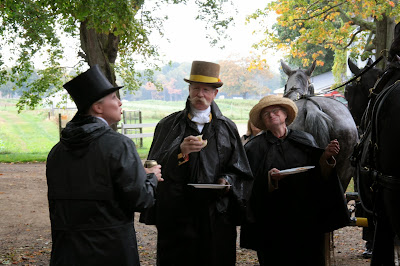 Lunch on the go as it was almost time to leave. The horses had rested and everyone had eaten. 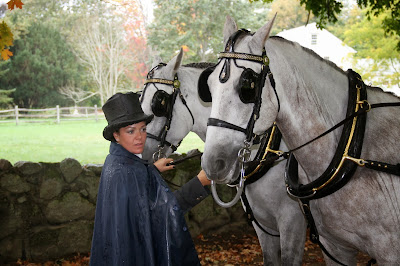 Still raining at this point and getting muddy. So glad I wore my suede shoes. They have since recovered. 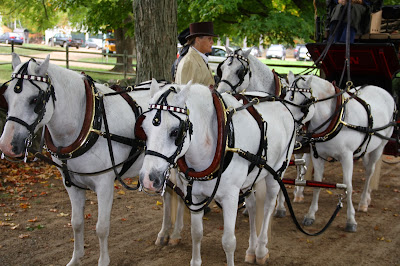 These ponies are German and so adorable. What fabulous coats they have! 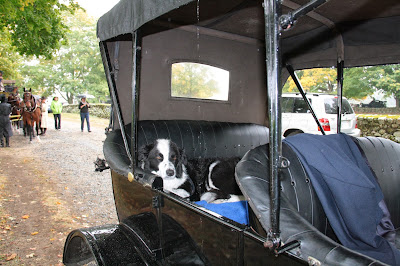 This border collie was safe from the rain in this old fashioned car.  Lucky dog! 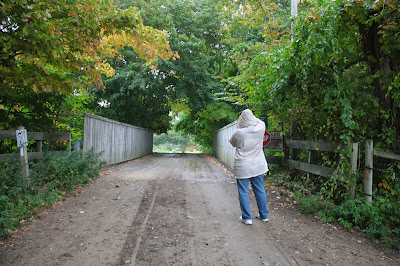 We heard that the coaches would be crossing this little bridge on their way out so we staked out our spots. 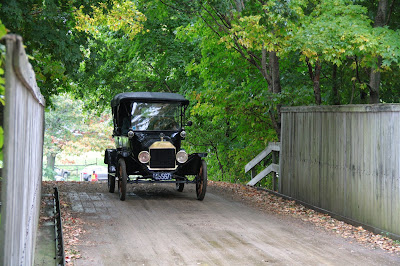 The border collie was the first to arrive over the bridge. I was all set to get some awesome shots when a photographer came up to me to say I was going to be in all her shots. She said she was getting paid for this shoot and so I offered to move. 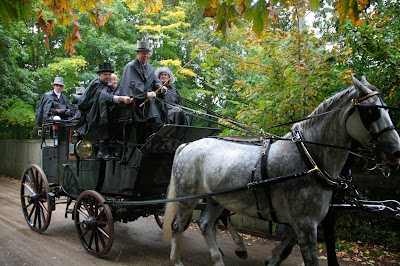 Since I moved from my spot, most of my shots ended up being too close. I like this one anyway. 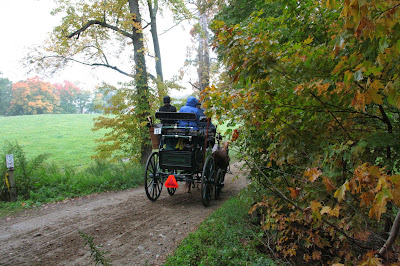 The last coach left Appleton Farms, we were hungry and soaked. We had a lovely time at the coaching event and now it was time for lunch at the Black Cow.

Robin Larkspur said…
Horses! Beautiful horses. and all those great coaches. Too bad it was such a rainy day. The old stone walls have seen so much go by them.
October 11, 2013 at 3:52 PM

Castles Crowns and Cottages said…
YOU WILL NOT BELIEVE THIS, by we lived a few blocks away from the CLUB! YES! We lived at the Gordon Conwell Seminary for 7 years. One of my favorite things to do was to walk over to the ranch across the street and give the horses carrots. I tell you, if the horses were yards away, all you had to do was raise ONE small carrot and those eyes would spot immediatly spot it. Then it felt and sounded as if an earthquake had occurred. Then, gentle, velvet noses would come and sniff me, then take the carrot from my palm.....bliss for me.

Oh my dear, this post is SO special to me. I long to see the horses again, and in all the years there, I never saw such a display as this. Magic, pure magic out there in New England! Anita
October 12, 2013 at 7:26 AM

Ocean Breezes and Country Sneezes said…
Lovely post, the horses are magnificent! I hope you were able to grab a warm coffee after being drenched!
October 13, 2013 at 10:38 AM