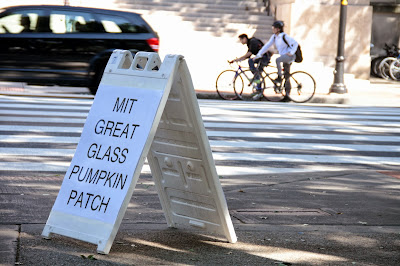 The best and the brightest students in the world attend MIT (Massachusetts Institute of Technology) in Cambridge. It is a very prestigious college. 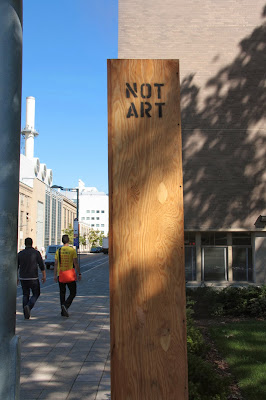 On Saturday, I attended the Great Glass Pumpkin Patch fundraiser at MIT.  Before I reached the Kresge Oval where the event was held I saw this sign. This may be Not Art but across the street there was art a plenty! 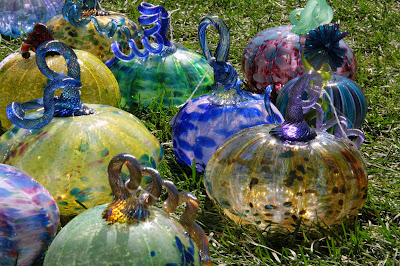 This year's event was the biggest ever. The students in the glass blowing class had created 2000+ pumpkins at the MIT Glass Labs. 5-7 students created each pumpkin. 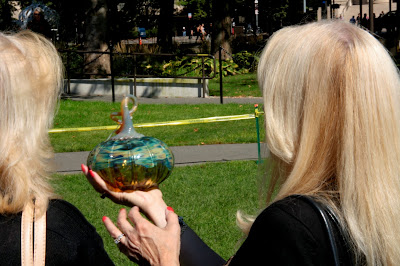 The day could not have been more perfect as the afternoon was warm and dry. I viewed each of the small pumpkin patches. Pumpkins varied in size and color and in price. Most were under $200 and some were under $100. I did see one for $1000. These women told me they already had two pumpkins in the car and they came back for more! 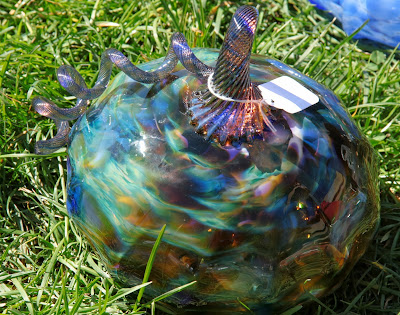 What a one of a kind gift this would make. I really liked this one but it was over my budget. 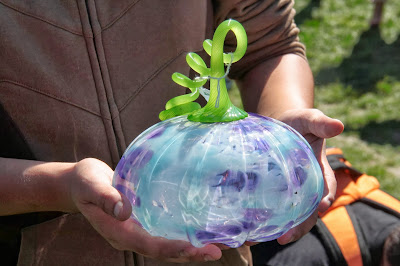 And this one was going home with this young man. I heard his mom say she really liked it but it was a little expensive. He said, "Well, you do have a birthday coming up". What a sweet son! 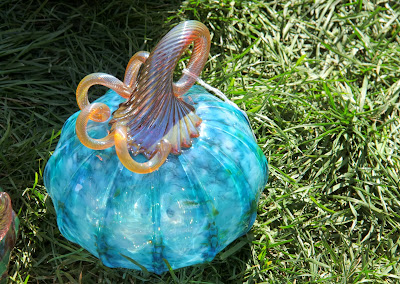 We were told not to pick the pumpkins up by their stems because they could break but this one looked pretty sturdy. 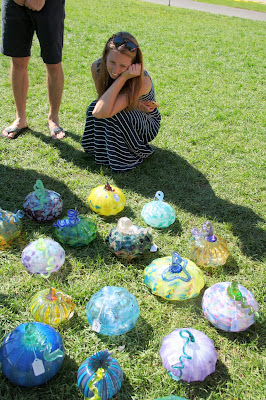 This woman liked them all. I think she was having a hard time deciding. Some people were buying more than one. Early Christmas shopping perhaps? 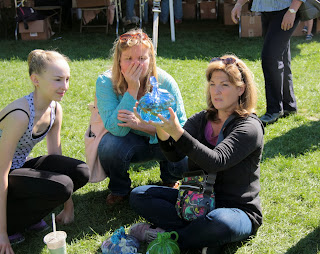 I think this woman was making her final choice with a little help from her friends and family. 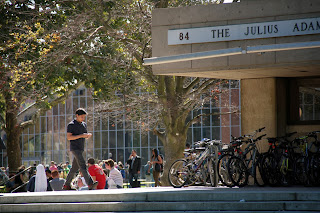 It certainly was a beautiful day for looking at pumpkins and fundraising. I hope the students made lots of  money!
Email Post
Labels: glass blowing glass lads Massachusetts Institute of Technology MIT pumpkins the Great Glass Pumpkin Patch

Robin Larkspur said…
Such amazing art!All those gorgeous glass pumpkins. How could one decide between them all. They should have made some little pumpkins with a less hefty price tag. Thanks for sharing this beautiful day.
October 1, 2013 at 10:12 AM

Diane McCarthy said…
What stunning works of art! I would definitely love to take this event in next year. Thanks for sharing, Elaine!
October 1, 2013 at 5:18 PM

Ocean Breezes and Country Sneezes said…
Wow, how unique! I would have loved to have seen that!

Castles Crowns and Cottages said…
WOW. I have never, ever seen anything like this! And we lived in Boston for years! My favorite is the aqua blue!

Hello there! So nice to see you stop by for a visit last night! I hope all is well out in Mass., and that your fall is an inspiring season. Our fall has been a longer summer and no colors on the trees this year.