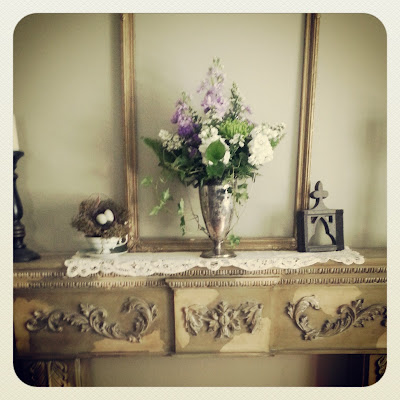 Every year I host a Wimbledon breakfast for my friends and family. We start at 10 AM and we have coffee and tea, crackers, cheese, and fruit, scones, frittata, and dessert. Occasionally, the menu varies.

I always have my favorite trophy filled with purple and green flowers. This serves as the centerpiece on the dining room table.  Pondview Florist did a great job with the flowers. I picked up the flowers the day before and placed it on the mantel so the kitties couldn't get at it. Percy of course, was able to jump up and take a nibble so I moved it to atop of the china cabinet. He gave up. 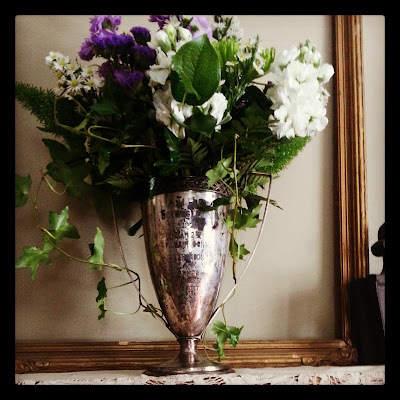 Here is a closer look at the centerpiece. I love it. It looks so elegant and I love the little tendrils of ivy. 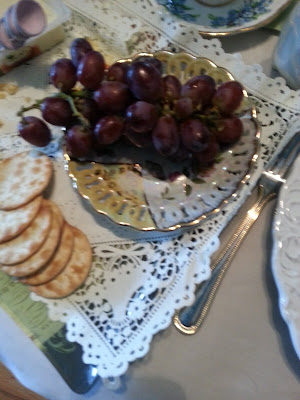 We started with a fruit plate and lemonade with mint. When I went to the cheese shop in Winchester, a woman offered me a taste of stilton cheese with mango and ginger. It was so delicious I bought some for the party. We also had Wensleydale cranberry cheese and brie plus crackers and red grapes. 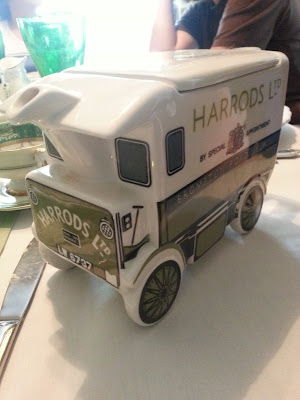 For tea, I went with a Lady Grey followed by Harney's Earl Grey Supreme loose tea. It was very nice. The Harrod's teapot always makes an appearance at the Wimbledon breakfast. 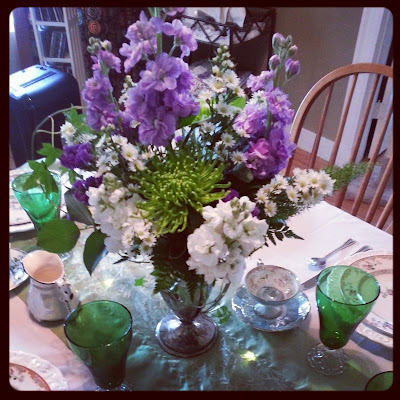 Here's an aerial view of the table. I took all of the photos with my phone. It's so much easier than lugging out the big camera. 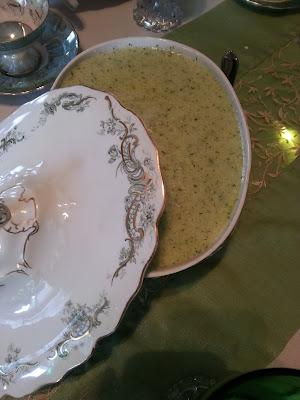 My sister made a cold cucumber and dill soup. It was nice and refreshing for a hot and humid day. I got to use my pretty soup tureen. 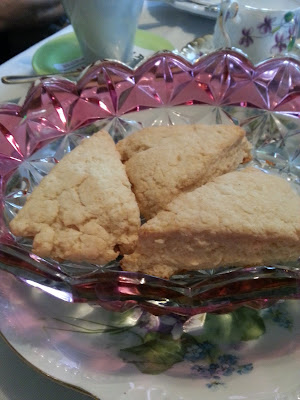 Mary made plain scones. They were still warm from the oven, heavenly! I prefer plain scones so I can.... 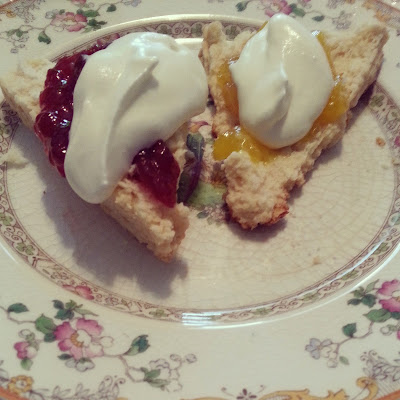 ..do this to them. My sister made the mock Devonshire cream. I had the cream and strawberry preserves on one half and cream and lemon curd on the other half.  So good!

Mary also made a frittata of bacon and baked potatoes. It was surprisingly light. Mary bakes the potatoes first then shreds them before adding them to the frittata. Did you know my friend Mary is a TV star? She debuted on local cable in Wilmington around Easter time. She made her famous Easter bread on the big screen. 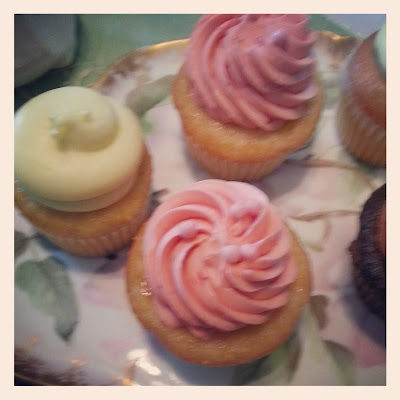 Now for the desserts, Debbi brought a cinnamon coffeecake from Kane's Donuts in Saugus.  It was too die for. I got the leftovers and believe me, it is decadent.

The cupcakes pictured above were from Cupcake City in Reading. They make the best cupcakes bar none and I am a connoisseur. I am partial to the signature chocolate but I also served the lemon curd and strawberry flavors. They are all spectacular. 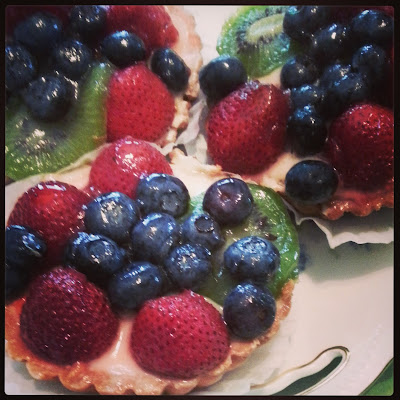 Mini fruit tarts were also on the menu. They came from Roche Brothers because I like them the best.

I was prepared to make some tea sandwiches as well but we had so much food it wasn't necessary.

So there you have it, another Wimbledon breakfast put to rest. The tennis was great and the food and company was even better!

Maria at inredningsvis said…
What a lovely blog you have here:) Do you have bloglovin to follow with?

Check out my blog...If you want some cute Swedish decor insppiration:)

Have a wonderful weekend dear