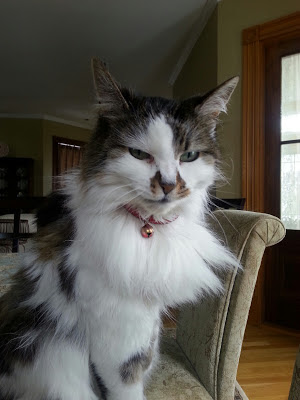 A few weeks ago, I had the pleasure of catsitting pretty Miss Tiger Lily.  Her parents were going on a trip to Florida and they asked me to be their catsitter. The assignment was for 5 days. Her fur was a little matted but we'll fix that.

There are two dogs in the household as well. The owner's brother took them to his house leaving Tiger Lily alone in the house. 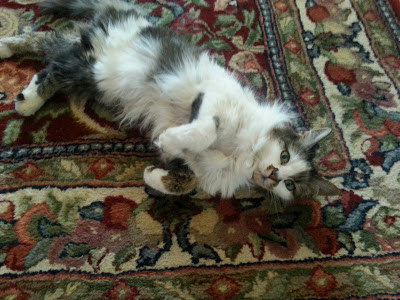 Tiger Lily is an indoor/outdoor cat. I told the owner's I would not allow Tiger to go out on my watch. They were fine with that. 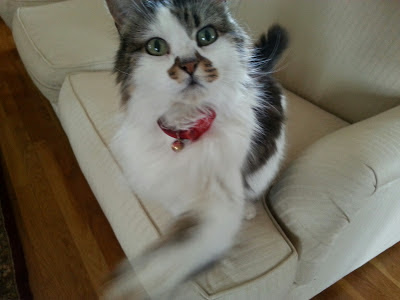 "What's this?", Tiger said. She did not agree with that at all. Of course, the weather was beautiful and Tiger really wanted to go out. 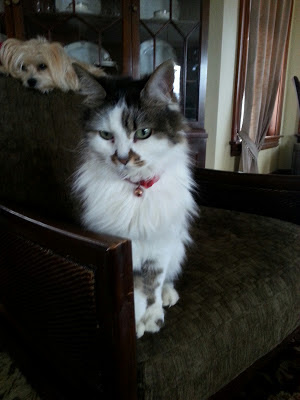 Here's her sour puss face after I told her for the eightieth time she could not go out. She was ok for the first two days but then she turned on me. She was obsessed with going out the front door.

She did, however, like to snuggle. So every day and night after she ate, she would crawl into my lap and cuddle. A few times she even fell asleep.  I got most of the mats around her neck out just by brushing her. She didn't even seem to mind. 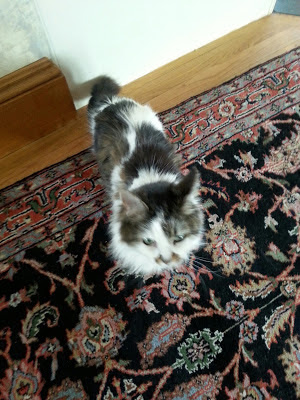 Poor baby. She cried and cried she wanted out so badly. Her parents told me that she would cry to go out but just to ignore her. That is easier said than done. She even followed me down the stairs to my secret escape route in the basement.  She's a tricky one! 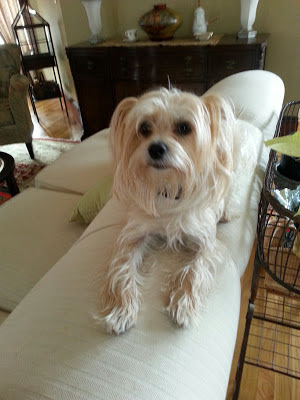 The owner called me on Thursday to say her brother was dropping off the dogs a day early. I did not have to walk them as she had arranged with another lady to do that. Meet Chloe Moey Zoey Grace Ryan or Chloe for short. She should not be on the couch but I didn't stop her.  Isn't she cute? 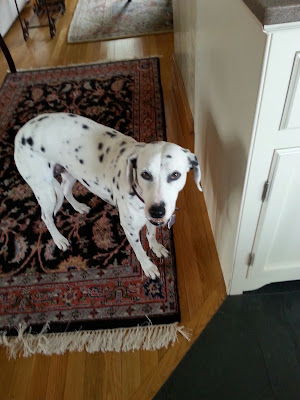 And here's Bella, a Puerto Rican street dog rescued many years ago. She is the sweetest, gentlest animal.
She is very attached to her Mama. 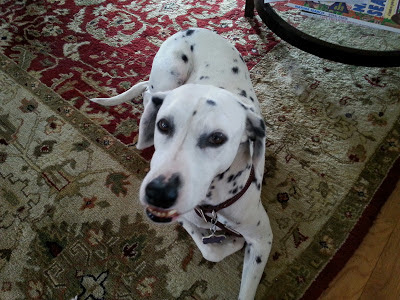 Bella has an overbite that is very distinctive. Her daddy puts on a voice and speaks for Bella. "Where's my mother?" he says.  Cracks me up every time.

I had a lot of  fun with the animals. They are the sweetest. All of them were really very good. And the parents insisted on paying me. Maybe I have a future in catsitting!
Email Post
Labels: Bella cats catsitting Chloe dogs Tiger Lily

Sue said…
such a cute cat....I am not a cat person at all but a year ago a feral cat showed up at our backdoor...clipped ear so we knew she didn't belong to anyone...a year later....Tonight while getting dinner ready I turned around to find her up on my kitchen island about to eat hubbies pasta....I have grown to love this cat...maybe someday she'll let us shut the door when she's inside and I too will cuddle with her like you did.....And I love the Puerto Rican street dog....it's a Dalmation isn't it??
June 5, 2013 at 1:02 AM

Fete et Fleur said…
Wow! Does she have a ton of personality. I love that one pic of her saying, What's this? Glad you had fun. I'd be a bit stressed out to let her out too.

Castles Crowns and Cottages said…
HOW ADORABLE IS THAT DALMATION with the overbite! tehee....I would at first glance, take her expression as one of AGGRESSION, but good to know she is gentle! And sweet Tiger Lily, what a princess! I love animals too, and they give me peace. THANK YOU DEAR for coming to visit and repinning!!! Anita
June 8, 2013 at 6:31 AM