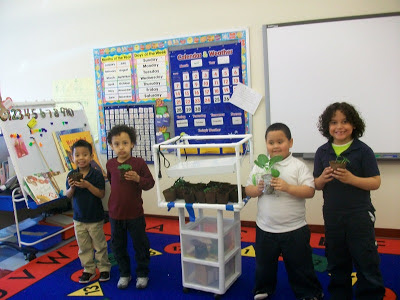 It's been a while since I gave you a progress report on my #26 acts of kindness. I have to say I didn't do a lot of heavy lifting with these acts. For most of them I just opened my wallet but I still think I made a difference in people's lives. So here they are, acts 10-19.

#10- My friend Debbi's friend Marguerite is a kindergarten teacher in Revere, MA. Marguerite applied for a grant to create a vegetable garden at the Paul Revere School. She received the grant but needed some extra money to buy some EZ Grow Starter kits for growing plants inside. If they were to plant outside too soon, all the plants would die. So with the help of several donors including myself, they got some of the plants started inside. Next week they will transfer them to the garden outside.

I think this is so cool! 5 year olds are learning to garden and grow their own vegetables. Good luck to Mrs Guide and her kindergarten students!

#11-  This next story tugged at my heartstrings because it involved an injured animal. 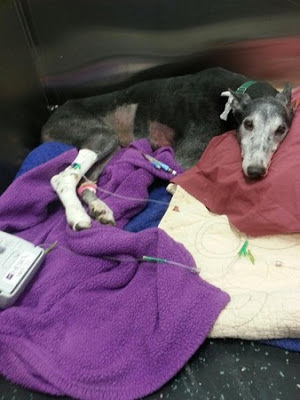 Lokin is an italian greyhound who, with his sibling, dug under a fence in his owner's yard and escaped. The owner was able to grab the other dog right away but Lokin took off running. He is a rescued greyhound  and a fast runner.  That night there was a police report that a greyhound at been hit by a car. The driver stopped but the dog ran off.  Lokin was found two days later in the bushes of a home just over the town line in Stoneham. Lokin lives in Melrose.  Lokin was severely injured with lots of broken bones and bruises. Lokin's vet bills are in the thousands. An online fund was set up which goes directly to the vet.  I felt so bad for the dog and his owner I gave some $$$ to the fund. I just checked again and Lokin is recovering nicely.

#12- And then there was the Boston Marathon bombings. I gave to the One Fund Boston. The funds to be distributed to the families of the 4 killed and the 260 victims. There was no question or waivering on this one. It was the right thing to do.

#13- At work, we had a children's book drive so I donated 6 books. I enjoyed looking at the books in the bookstore and picked out a few that would interest me if I were still a child. I think they'll like them.

#14- The marathon bombings were so devastating to our city. The day after, I found out that I knew two of the victims. Marc Fucarile is the son of one of my former co-workers and his aunt is my friend. His mom lives on my street.  Marc was severely injured. He lost a leg and was burned over half his body.  He continues to recover with family at his bedside every day at Mass General Hospital. My friend Debbi asked me if I personally knew any of the victims. She wanted to donate to someone that one of her friends knew. So she gave me a check  for Marc and so did my sister. Debbi also had a Kentucky Derby party and everyone donated their earnings to Marc. We raised $250. for his care. Hardly a dent in his medical bills but it's something.

#15- I was checking on Lokin's vet bill fund and I noticed that donations had slowed down. I am sure it was because everyone in this area was giving to the Marathon Victim's Funds. I gave a few more dollars to show that a recent donation was made to the fund. It also rounded the donations to a total of $1400 collected for Lokin. The goal is $5,000.

#16- My friend Jeanne's 17 year old daughter is going to Kenya this Summer. She is going to help the people in a village by helping to build a school. She is also going to do the water walk which means she will be walking in the heat for 2 hours to obtain water to bring back to the village. The Kenyan women do this at least twice a day. Victoria is fundraising for her trip so I gave some $$ for this cause. She is going to learn some life lessons on this trip. I am glad to help her with this opportunity.

#17-  gave my hairdresser a ride home from her salon. Then she invited me to stay for dinner. I benefitted from my act of kindness!

#18-  another monetary donation. This time to the Stoneham Strong fund which is a fund for the 6 Boston Marathon bombing victims in my hometown of Stoneham. As I mentioned, I knew two of the victims. You may have seen Jacqui Webb on Dateline and other shows. She is the girlfriend of Paul Norden who is one of the two brothers who each lost a leg that day.  Jacqui is a realtor and I am a lender so I know her through business. She also worked with my friend Jeanne who is also a realtor. So of course, I had to give a donation to this local fund.

#19- a simple act of kindness - I almost wasn't going to count this one because it is so minor. My neighbor has a baby and she is constantly trekking the baby up the stairs to her condo unit. The other day she was trying to manage the baby, the dog and bundles from the grocery store. I was wondering how she was going to manage all this so I volunteered to carry most of her bundles so she could concentrate on the baby and dog. She was appreciative.

Can't believe I have reached 19 acts of kindness and I'm feeling really good about it.

I thought it might be good to read about others' acts of kindness so I bought a book from Amazon called The Year of Doing Good by Judith O'Reilly. It's a great book. Judith made a resolution to do one good deed a day for an entire year. The book chronicles each of her acts of kindness. It reads like a diary as she tells a story with each entry she posts.

I am only on act #20 but it has already captivated me. She writes with humor and familiarity. I feel like she is a friend telling me her stories over a cup of coffee. As I read the book I think she could be me. Can't wait to read about the other 345 acts!

Judith has already brought up some questions I was also thinking about my own acts of kindness. For instance, Judith did a good deed for a friend and then she received a thank you note, a bottle of wine and some chocolates from the woman. So she was wondering if she should count the good deed. She never expected a gift and she only did the kindness with the purest intentions.  In the end, she did count it.

I hope you will chronicle your own good deeds so that you can tell me what you did. I am thinking we could do a collaborative post about doing good.  And if you are interested in Judith's book you can only buy it from Amazon UK. Yes, it all took place in England which I think makes it even better!

Castles Crowns and Cottages said…
Good morning! Coming here was like going back home.....REVERE, oh how I remember passing it for the first time when we moved to Massachusetts. I had NO idea what Mass. would be like, but once out of the airport, there we were, driving towards S. Hamilton, seeing the various and diverse landscapes of the city and people.