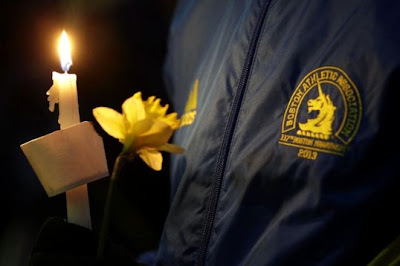 A little more than a week has passed since the bombings at the Boston Marathon. And there are so many things I will never forget.

I overdosed on television coverage. From the minute I heard about the bombings to the night of suspect #2's capture, I had been glued to my TV. Flipping channels on my remote from the local stations to CNN and Fox News. I had to know every detail.

The real time coverage of the shootout with police in Watertown was the height of my addiction. I stayed up until 3:30 AM Friday morning watching it. It was the closest thing to a real life episode of 24 I'd ever seen. Bombs and bullets in a sleepy suburb.

In the first few days after the attack, I noticed how quiet it was everywhere. People were watching the TV silently in coffee shops. People on the street not making a sound. Really what was there to say?

Until today, I did not even know who won the race. I wasn't even sure there was a women's winner. The race was stopped shortly after 2:50PM. The winners' victories had been stolen.

The heroic stories. Such goodness in this city. People running towards the explosions in order to help the gravely injured. The runners running straight to the hospitals to give blood. The volunteers who saved lives with their quick actions. And the hospital workers who took over where they left off.

The tributes at the Red Sox game and the National Anthem being sung by the crowd at the Bruins game. They sure brought me to tears.

The lockdown in the City of Boston- no subway, no trains, no taxis. A virtual ghost town for a day.
My own credit union had to close some of it's branches.

The beautiful town of Watertown which will be forever linked to terrorists. It was just unbelievable what went down there on Thursday night. As one news reporter said, "This is not Baghdad, we're in Watertown!"

A fallen officer's funeral which took place at my hometown church, the sight of my first communion and confirmation.

Five victims of the attack were from my hometown and they were all seriously injured. One grew up on the street where I live and I worked with his mother. Another is a realtor I know.

All of the dead were young people. Less than 30 years old including an 8 year old. I will never forget their faces. 2 beautiful women, an adorable child, a brave young policeman.

The tireless work of the local police, state police, SWAT teams, FBI etc. They worked around the clock to hunt down the suspects and keep everyone safe.

Mayor Menino who was recuperating from surgery on Marathon Monday, checked himself out of the hospital so he could be there for the city.

The governor who was always calm when reporting updates.  And the same for the Boston Police Commissioner. I love that man. He was so cool and professional.

The support from the entire country including personal emails to me from blog readers. It was very much appreciated.

I will never forget how anxious, sad, and terrified I felt. I know the sadness will last for a very long time. It will be hard to walk Boylston Street, knowing what terrible events took place there. It seems like ir was not that long ago that I had afternoon tea with friends at the Boston  Public Library.. Happier more innocent times.

Today the funerals are over, the injured continue to recover and cope with their devastating injuries, Boylston Street is open again, the remaining suspects has been caught, and the rest of us try to move on. And we will, with time.

Crystal Rose Cottage said…
I can't imagine what you went through living so close to this tragedy. I think everyone was riveted to the news coverage. We need to focus on all the positive outcomes and the good that people did for others that were hurt. That's one of the best ways to get through it because sometimes you just can't make sense of it all. ~Hugs, Patti
April 24, 2013 at 8:56 AM

From Beyond My Kitchen Window said…
Can it ever be the same? I don't know, but I know we have to move forward. I will never forget that feeling of having something so horrible happening so close to home.
April 24, 2013 at 9:52 PM

Donna said…
What a moving, poignant post, Elaine. My standard route when bringing my youngest to and from college was getting off the Pike at the Copley exit, taking a left on Dartmouth and crossing over Boylston on my way down to Marlborough St. I could drive it in my sleep I know that area so well. And my oldest, who lives in the city, always seemd to be working a couple of retail jobs on Boylston to make ends meet, one at Boylston and Dartmouth, another at Boylston & Arlington.

Thanks again for the moving post and tribute to such a wicked awesome city and its people...