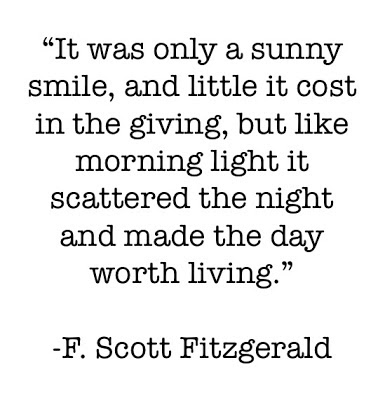 So I have been continuing with my random acts and I love seeing the reactions of people when they receive a simple gesture of kindness. F. Scott Fitzgerald said it perfectly.

Since my last post I did a few more of the 26 acts. Again I was waiting until an opportunity presented itself. I read a story that really touched me and there it was my opportunity to help a perfect stranger.

I read online about Brandy Jones, a woman who had a fire in her apartment building in Manchester, New Hampshire. On February 5th, she was in the shower when smoke filled her apartment. She got out of the shower and immediately tried to find her pets. She grabbed her dog Sadie and put the leash on her and got out of the building. Sadie, a 2 year old pit bull mix, was so panicked she slipped her collar and was off and running. Sadie was nowhere to be found for days and then there were some sightings. Brandy searched for her even during the blizzard which was a few days later.

Brandy lost everything in the fire,her home, all her belongings. 3 cats, a bird, and a hamster. There were some sightings of Sadie and volunteers continued to search for her. Then the most devastating of news, Sadie's body was found in the wreckage of the building. She had apparently run back into the building and into the fire. The sighting were not of Sadie. She had been killed in the fire.

I cried when I read about Sadie and Brandy. The paper said donations of clothing and gift cards were being accepted so I sent a Target gift card to her along with a handwritten note. There is a fund in Sadie's name as well. I hope my gift card brought a smile to Brandy's face, she certainly deserves it. Act #6.

I was at the gas station the other day and the weather was just miserable, cold and rainy. It was a full service station so I didn't have to pump my own gas. The attendant works all hours of the day and in the worst of weather conditions and always greets me with a smile. He is such a positive sweet man. So when I paid for the gas I gave him a Dunkin Donuts gift card so he could get himself something warm to drink. He was thrilled and it was so nice to see the smile I brought to his face. Act #7. 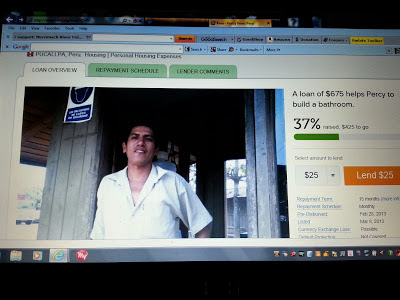 On Twitter, I follow a woman named Nicole Martin who writes a tea blog called Tea for Me Please. She tweeted about an organization called Kiva and she said she made a loan to a tea farmer. Kiva gives loans to people all over the world by collecting donations. It is a cool concept. They were having a free trial and the other Kiva members donated money so new members would join. So I loaned Percy $25. It went to his bathroom fund and didn't cost me anything. When I joined Kiva I selected Nicole's team so Nicole was awarded another $25 and she made a loan to a second tea farmer since that is her interest.

I checked out all the possible borrowers and  I decided to pick a loan recipient who needed a house loan.  After all, I work as a mortgage originator so housing is my thing.  I looked at all the housing loan possibilities. I wanted to find someone who had an achievable goal. There was a person who was at 37% of his goal. So meet Percy, he lives in Peru. He needs to build a bathroom in his house. I was able to donate $25 towards the $675. he needs. And how cool is that? His name is Percy! My little Percy cat would be proud. Act #8

The last act of the week was at a Starbucks in Reading, MA. I had 5 gift cards of $5 each. I wanted to hand them out but there was always a line of more than 5 people. I want to make people happy not tick them off.

I ordered my drink and suddenly just 3 people in line. 3 men of different ages. I said to each one, " I am buying your coffee today" as I handed them the card. They were shocked. Then they smiled and the last guy said, "You really don't have to". I said, "I know but I want to".  He had the biggest smile on his face as I walked past him and out the door. Mission accomplished. Act #9

What an adrenaline rush! I get such a high from each one of these acts.  After I complete the 26 acts I will continue my acts of kindness for sure! And if you want to be kind and donate to Brandy or Sadie's fund please email me and I will send you the info.

Blondie's Journal said…
I don't think there are enough words to say how wonderful it is that you are doing these acts of kindness. The story about Brandy just broke my heart. Our pets mean so much to us...and to lose everything you own. Please send me an email with the address.

You really are proof that there is still a lot of good in this world!

From Beyond My Kitchen Window said…
Elaine, you have inspired me. I remember when you posted about doing this and I thought it was such a kind thing to do. I must get going on my my own random acts of Kindness.
March 12, 2013 at 7:36 PM

Anonymous said…
Just discovered your blog. It is an amazing feeling being so helpful to others - its a two way thing. I am English and there is a great book out at the moment by a lady who did just that for a year (forgive me if your're aware of this already. The book is called "A Year of Doing Good"
by Judith O'Reilly easily available here via Amazon.
March 17, 2013 at 1:47 PM