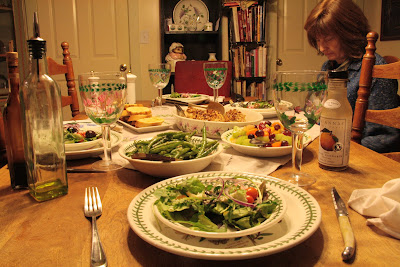 My sister and I were invited for dinner at Jolie's house Thursday night. You may remember Jolie as the woman who throws fabulous Christmas parties. She graduated from high school with my sister and because of her connection with my sister,  Jolie has invited me to a few of her parties. Now we have become friends too.

I have to admit I was a little nervous about attending this dinner as Jolie very recently lost her sister Lori to cancer. I thought it might be uncomfortable. Let's just say I am the world's worst at comforting people who are grieving.

I remember Lori as a joyful, positive person who brought music to Jolie's parties. She was a gifted pianist and I always enjoyed listening to Lori's inhouse concerts at the holidays. Lori had many talented friends who entertained at Jolie's parties. 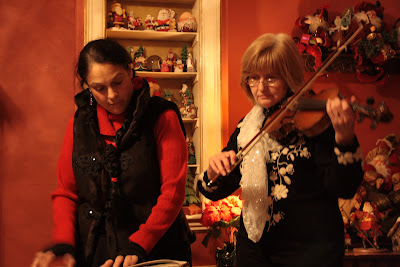 The above photo of Lori and my sister was taken in December 2011 at Jolie's Christmas party.

Well, the evening was actually amazing. Jolie, who said she wasn't on her game, certainly was very much on her game. She prepared an absolutely fantastic meal. It was beyond delicious and something I could not achieve on my very best cooking day. 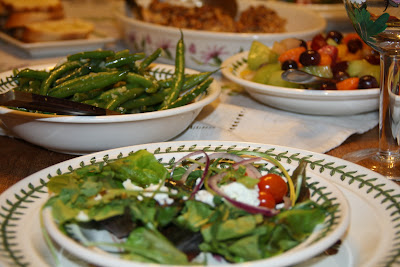 We started with a mixed green salad with feta cheese and there was also fruit salad. Of course, I had both. In fact, I ate everything offered to me! 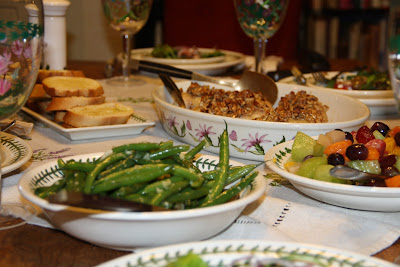 Then we had pecan encrusted chicken breasts. I am not sure what the sauce was but it was not a heavy cream sauce, It was deliciously light. We also had harvest grains, green beans and garlic bread. 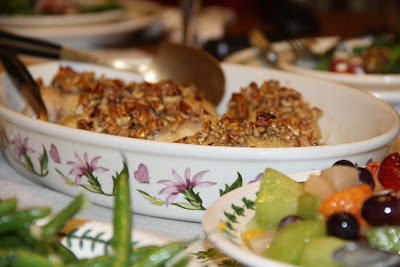 Here's a closer look at the chicken. The dishes were so pretty too. Jolie thinks serving family style is not that pretty but I do. 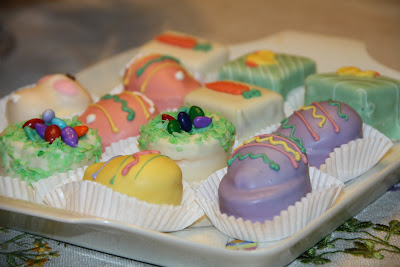 My sister and I brought some Easter Petit Fours from la Patisserie bakery for dessert. Aren't they cute? 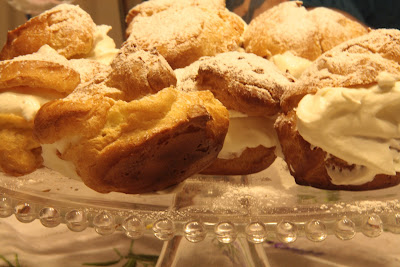 Jolie made cream puffs and she made the whipped cream immediately before serving them. They were so fresh and yummy. I had one but I clearly could have eaten more. I want these at my next party. Jolie sent us home with some of these beauties. 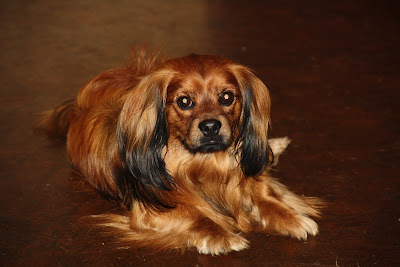 I should have mentioned that when we entered the house we were greeted by this little guy. Meet Buddy. He is a funny little guy. At first, we could not even look at him. If we did, he would run away. He was so frightened. It didn't take long before we gained his trust and he was sleeping at our feet.

Buddy was fostered by Jolie and her daughter Casey and then he went on to what was thought to be his forever home. The forever family had to give him up and now he is back with Jolie. He sleeps on Casey's bed at night, chews and steals her socks, rips up the bathroom rug and pesters his older brother, English Mastiff Morgan who is at least 8 times his size.

Despite his quirks, Buddy is a sweet, young dog and he is happy now. He has only been back a few weeks but he has settled in nicely. 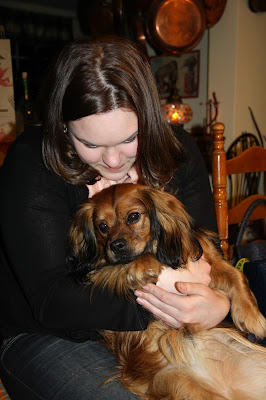 Casey loves her puppy. She may act like he annoys her but you can tell when you seem them together that they love each other. 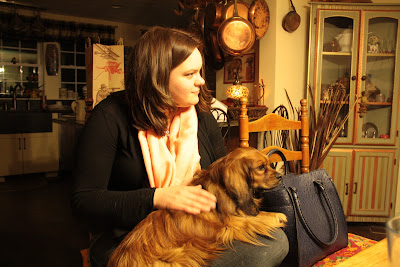 While Buddy was sitting in Casey's lap, my sister commented that she wondered if Buddy could fit in Casey's bag. 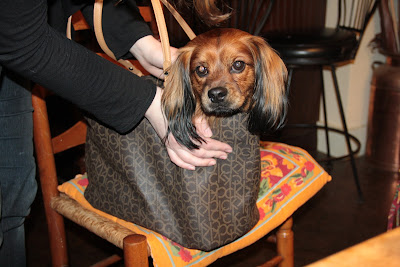 Casey brought out a bigger bag and sure enough Buddy fit in it and seemed to like it.  Don't worry no dogs were harmed  during this exercise. 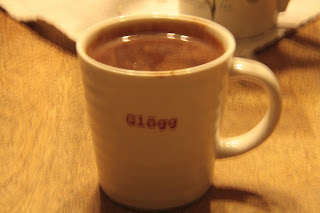 We ended the evening with some chocolat. Casey made us a hot chocolate not unlike the drinking chocolate you find in patisseries in France. It was that good.

We had a wonderful evening. We had interesting conversations, we reminisced and we hatched some plans for the future.

Thank you to Jolie, Casey, Morgan and Buddy. My sister and I had a delightful evening!
Email Post
Labels: Buddy Casey dinner Jolie Lori

From Beyond My Kitchen Window said…
What a lovely evening. The food and table looked fabulous. Buddy certainly looks happy to me.
March 30, 2013 at 7:50 AM

Fete et Fleur said…
Lovley dinner party. I'm so glad you all enjoyed your evening together.

Wishing you a wonderful and very Happy Easter tomorrow.

Blondie's Journal said…
It sounds like you had a wonderful evening and maybe it was just the tonic Jolie needed. I would have enjoyed that meal, it looked very light and tasty.

Happy Easter to you, Elaine!

Ocean Breezes and Country Sneezes said…
I'm sorry for your friends loss, sometimes having good people around is comforting in itself. It looks like a fun time was had by all!
April 2, 2013 at 11:13 PM

Yarni Gras! said…
what a wonderful night! I love the little pooch, I had a King Charles once...she was the BEST little dog!
As for the hot cocoa....um...perfect nightcap in my humble opinion.
April 4, 2013 at 6:56 PM

Val said…
That Jolie was able to pull off such a welcoming and lovely evening in the thick of her grief is the mark of a truly great hostess indeed. What a special dinner for all of you. It all looks and sounds so special.
April 5, 2013 at 12:25 AM