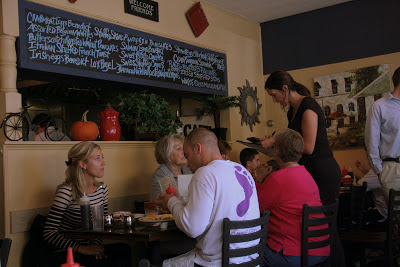 Remember I mentioned that I had committed to doing 26 acts of kindness?  Here's the post about it. Well I had only done one act until recently. I wanted the acts to really mean something and bring joy to the recipient so I've been taking my time and really thinking about it.

1. Bought items and a cake for a birthday party for a child living in a homeless shelter.

2. Gave the guy selling newspapers outside of Dunkin Donuts a gift card. It was snowing that Sunday morning and he was clearly freezing. I thought a warm drink would do the trick but since I didn't know if he was a coffee drinker I gave him a gift card.  As I walked out, I handed him the gift card and I just said, " Coffee's on me".

3. I was driving down a street in Melrose when I saw an older woman taking groceries out of her car. She left her trunk open and headed into the house. She walked unsteadily on her snowy walk. I stopped my car behind hers and grabbed the remaining bags of groceries and closed the trunk. I carried the groceries up her front steps and put them on the top step. She was surprised to see them when she came out of the house. She thought I was a neighbor and when I said, "No, I was just driving by". She smiled and said, "Thank you dear."

4. I was doing some sales calls and I stopped for lunch at the Blue Moon Grill in Wakefield. An older woman came in and sat at a corner table by herself. The waitress brought her a menu and she ordered a salad. I decided I was going to pay for her lunch. I was almost finished and ready to pay for my meal. I overheard the woman ask the waitress if she could change her mind. I waited while she made her selection of chicken cacciatore.  The waitress gave me my check and I asked her to add the woman's meal to my bill.  She said, "Really?" She was stunned. I said, "Yes." The waitress asked if I knew the woman. I said, "No". She said, "That is wicked nice of you". I had the waitress tell the woman her check was paid after I left the restaurant. I would have loved to see her reaction but I didn't want to make a big deal of it.

5. I heard about an organization called Granite State Dog Recovery.  They are comprised of a group of volunteers who help people find their lost dogs. They do really good work and they have helped reunite a lot of dogs with their families. There is a dog who is missing in my hometown and they have been helping coordinate the search. Anyway, last week the organization had a really bad week. They had to report that one of the missing dogs was hit by a train and another one died from injuries from a fight with a neighbor's dogs. Then they found out that a woman had urinated on a feeding station they had set up for one of the lost dogs. She destroyed a blanket and the dog's food. And then someone stole one of the have a heart traps. The trap was for a large dog and it was a bolted to the ground.  Someone actually used bolt cutters to steal the trap! So, I donated enough money to purchase a new large dog trap and actually six people donated traps that day.  So something good came from all the bad.

I have to say it really does make you feel good to do something nice for perfect strangers. Most of the recipients are shocked by acts of kindness. That's kind of sad, don't you think?

I have not set a deadline for completion of the 26 acts. I think I will just contribute if and when there is a need.

Fete et Fleur said…
Oh, what lovely things you have done. We need so much more of this in our world. Keeping our eyes open and doing good. This is what it's all about. Well done!

Terri said…
Kudos to you for your acts of kindness. The last one proves to me that some people will EVEN steal something bolted to the ground!
February 27, 2013 at 11:32 AM

Karen (Back Road Journal) said…
What a nice day to have discovered your blog. Your acts of kindness were wonderful...especially for the homeless boy's birthday cake.
February 28, 2013 at 11:17 AM

Karen (Back Road Journal) said…
What a nice day to have discovered your blog. Your acts of kindness were wonderful...especially for the homeless boy's birthday cake.
February 28, 2013 at 11:17 AM

Ocean Breezes and Country Sneezes said…
Elaine, what can I say . . . Your deeds of kindness are wonderful, the one that really touched me was helping with the groceries.

HWIT BLOGG said…
Hi!
You have a LOVELY BLOG!

Take care and have a nice weekend...

Donna said…
Elaine, you are SUCH an inspiration! So many of the stories are heartbreaking. How wonderful of you to bring such sunshine into these people's lives!