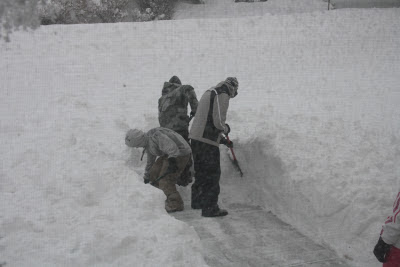 Well, we're all dug out from the major storm of about 10 days ago.  This is the front walk to the condominium building where I live. My neighbors were out fairly early trying to keep ahead of the storm. 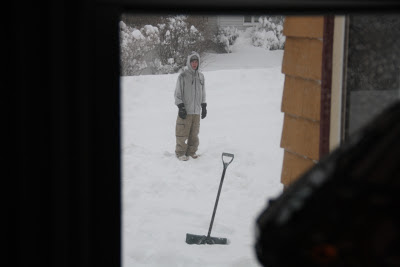 One of the boys was standing at the end of the walk on a snowbank and he was almost level with my living room window! 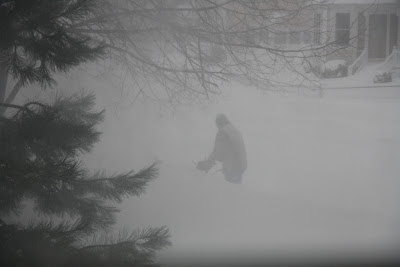 I could barely make out the figure of my next door neighbor who was snowblowing his driveway. 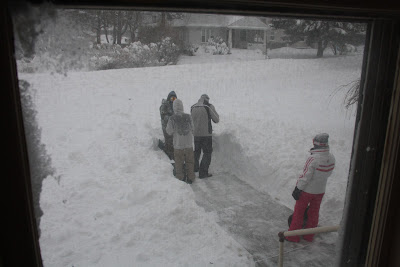 They were making pretty good progress. The snow was heavy and wet. Sometimes it is light and fluffy but not this storm. 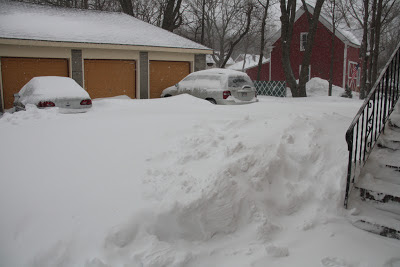 That's my car off in the distance.  I did not think I would ever get it out with all that snow. It looked like a daunting task. 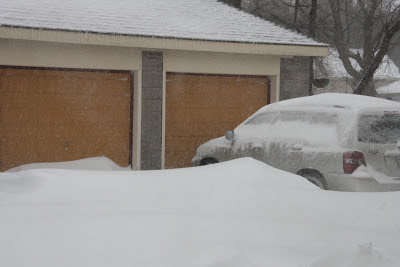 The drifts had to be 3-4 feet. The plow guy did not show and so my upstairs neighbor, my sister and I dug my car out and then shoveled in front of my neighbors garage so she could get her car out. 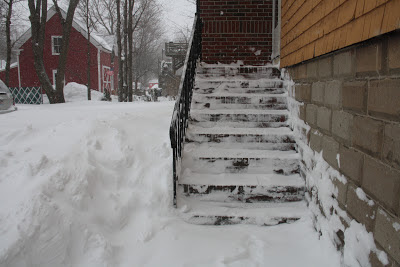 The boys had done the back steps. 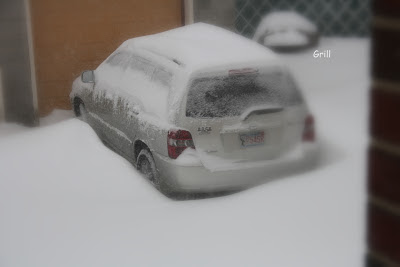 I shot this photo from the steps. 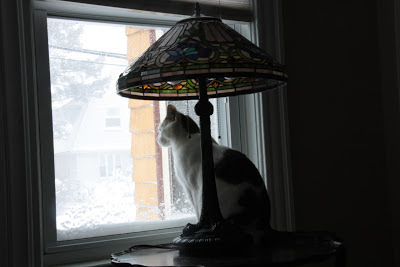 Percy loves to watch people doing manual labor. At least, he was safe and warm during the storm.
The final tally- we think between 22 and 26.5 inches. There were conflicting reports. I do know it was the fifth worst snowstorm in Boston history.
At least, I did not lose electricity during the storm. Friday night the winds were howling and the lights were flickering. I was stressing thinking at any moment I would lose lights and the heat so I went to bed. It was still snowing in the morning and since there was a driving ban nobody was going anywhere.
We hired another plow guy and he finished what we didn't. It was about 5:00PM on Sunday . I was mobile once again and Nemo was one for the history books. Good riddance!

Blondie's Journal said…
Wow...that's a lot of snow! It looks rock solid. Has it melted yet? Of course we've had hardly anything. I don't want to get snowed in but a little prettiness would be nice. Then again there is a storm heading our way but who can believe it?

I hope you find a cozy corner to cuddle with your warm kitties over a cuppa.

Sara's Sweet Surprise said…
Okay, you've convinced me...not to complain about our occasional winter rain.
I hope you find a cozy corner to curl up with your warm kitties over a cuppa.

Ocean Breezes and Country Sneezes said…
We rode that storm out at our cottage in Maine, then came home and dug out our home in MA! Just think, there's another one headed our way! I'm sooooo sick of snow. . .
February 21, 2013 at 11:35 PM

Susan said…
Hello Chatelaine....You got a LOT more snow than we did in Western Mass. Tonight it's flurrying a little but nothing major so far.

Thanks for stopping by my blog and commenting, too!