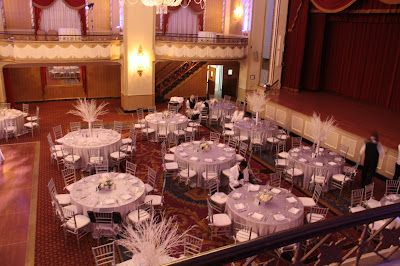 My sister was commissioned to do a live event painting for a New Year's Eve wedding. The venue was the Park Plaza Hotel in Boston. The Imperial Ballroom to be exact.  She would paint the festivities from the opera box or balcony above the room. 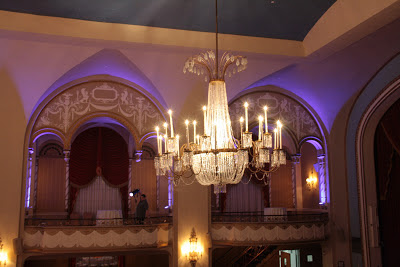 She usually takes a few reference photos as she can not paint all the goings on in one night.  She always finishes the painting in her studio.  For this wedding, she hired me to take the reference photos. She said her little point and shoot camera's flash would never be strong enough to record the action down below the opera box. 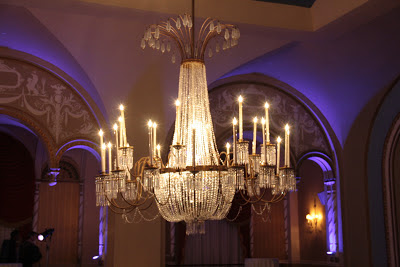 The ballroom was very impressive and looked like a winter wonderland.  The chandeliers were massive and exquisite! 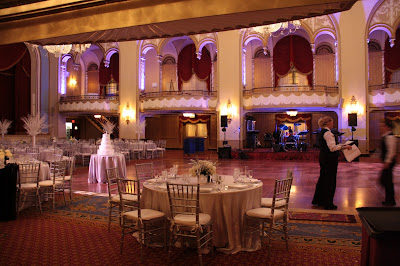 Here's a view of the opera boxes. I took this shot before any wedding guests arrived. 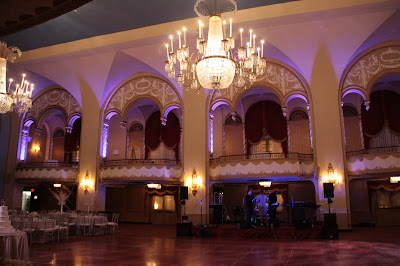 With purple uplighting, the entire room was transformed into something magical and elegant. 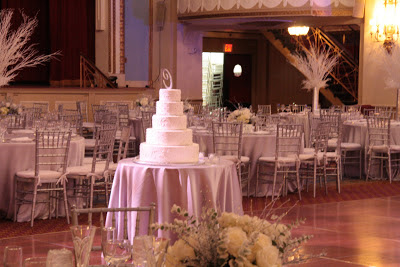 The cake was topped with a glittery C for Caroline and Charlie, the bride and groom. The chairs were silver as were the tablecloths. 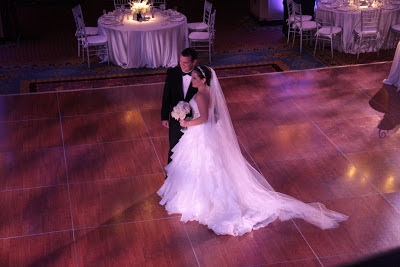 The bride and groom got a sneak peek at the room before the guests arrived and I got my first look at the dress. It was beautiful, flouncy and feathery looking. 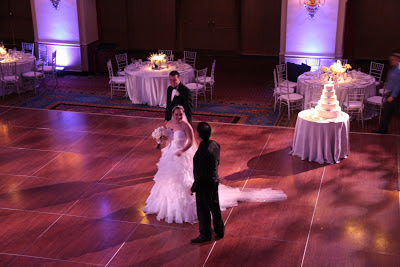 The bride smiled throughout the night. I don't think I have a single picture of her where she isn't smiling. As it should be, right? 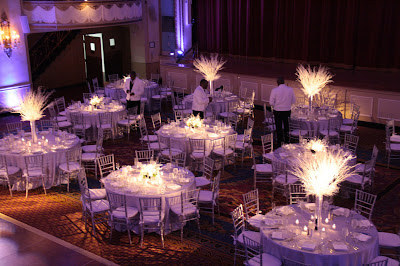 Many of the tables had illuminated trees as centerpieces. It was tasteful and elegant. 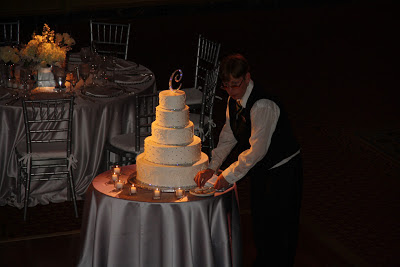 The cake had center spotlight and it was a beauty.  Tiny "pearls" decorated each layer. 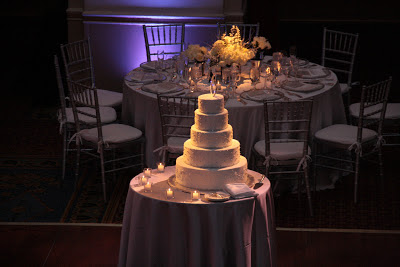 Again the cake. I do not know what flavor it was but it looked yummy. The cake is an important feature of the wedding painting so my sister asked me to make sure I got some good shots of it  for her reference. 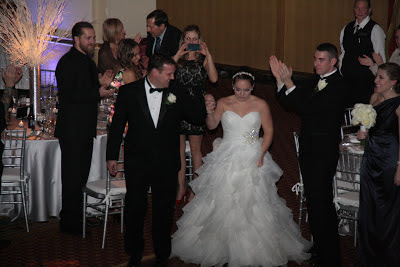 Of course, the dress is also important so I took lots of pictures of the bride. I was also supposed to take shots of people doing things like dancing and clapping. And shots of people who were smiling and happy. 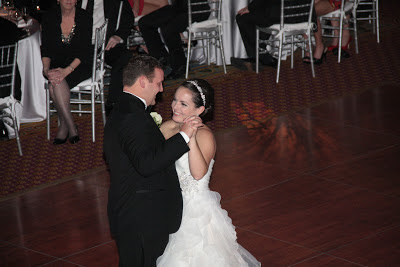 Mission accomplished in this shot. I think these two look very happy! They were so cute! 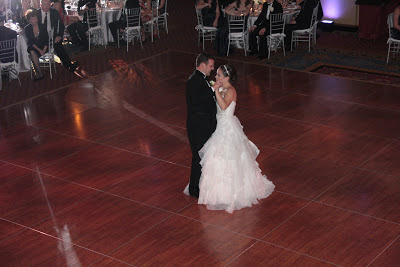 Most of my sister's customers want the first dance of the bride and groom as the focal point of the painting. 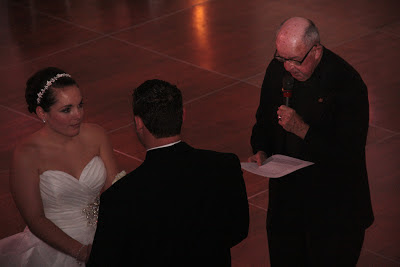 The clergy man gave the couple a lovely blessing. I used my zoom lens to get this photo. 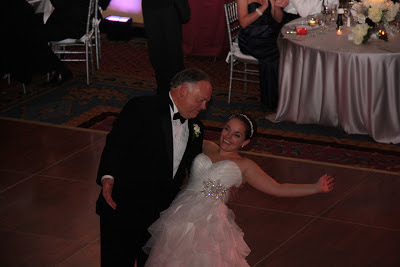 The bride's dance with her Father was sweet. it looked like her dress had a crystal snowflake on it. Quite fitting for a winter wonderland theme. 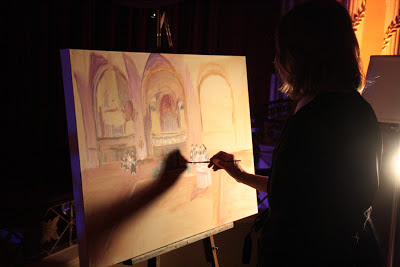 My sister played catch up with the painting as we got stuck in a traffic gridlock on the way to the wedding. One of the streets was totally blocked off and traffic was being rerouted. 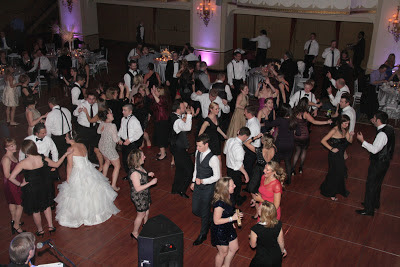 I took so many shots of people dancing and I used my flash to pick up the details since we were another story up in the opera box. 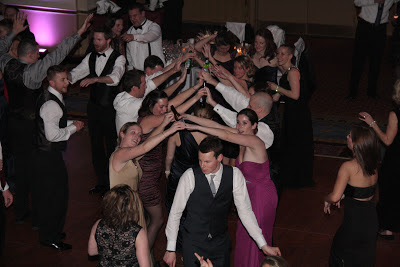 This wedding was a major dance party. The guests danced all night. I hardly saw anyone sitting at the tables. 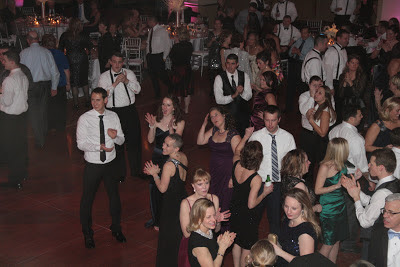 People clapping and smiling just what my sister wanted for her reference photos. I can't wait to see the finished painting! 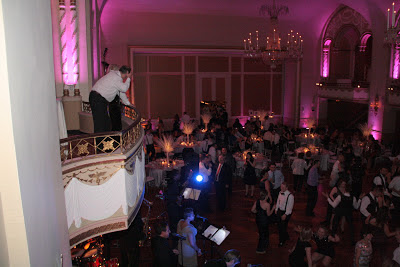 As you can see, we were pretty far removed from the wedding so I could snap away to my heart's content without interfering with the official photographer. I took 700+ photos. 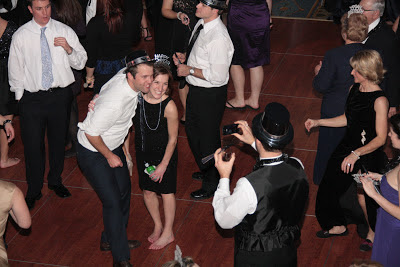 The wedding lasted into the New Year and there was a big screen TV so we could watch the countdown to 2013.

The wedding lasted into the wee hours of the morning. I was exhausted having working during the day at my regular job. At the end of the wedding, just as we were leaving, I got violently ill and I was thankful that the ride home was quick. We did have a bit of a wait for the valet to get our car because there had been a hit and run right in front of the hotel. There were police cars and an ambulance blocking the road. The EMTS were attending to the victim who was still in the middle of the road. Yikes!

Vermont Country Wedding said…
Wow! what a beautiful celebration..I love the decoration, the lights as it gives color to the celebration. This was great. Congratulations!
January 18, 2013 at 1:07 AM

Robin Larkspur said…
Great photos of a happy, silvery wintry wedding. I hope you will photograph your sister's artist endeavor for us!
I am sorry to hear you got sick, was it food poisoning? You poor thing.
January 18, 2013 at 2:06 PM

From Beyond My Kitchen Window said…
I better get saving my pennies. I would love to have your sister paint my daughters big day(no plans just yet). What great photos you took Elaine and what a gorgeous wedding!
January 19, 2013 at 8:14 AM

Donna said…
What a spectacular time you and your sister must have had at such a beautiful wedding reception! With your photography skills and your sister's artistic skills, you make quite a team! I hope you will share the finished piece your sister paints!

Thanks for the compliments on our little living room makeover! I guess we are all getting the bug to organize a bit!