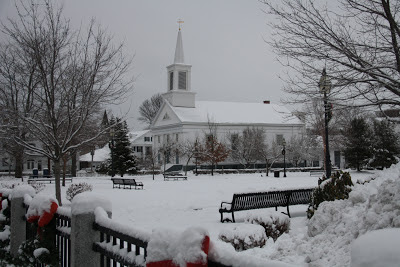 We had about 6 inches of snow last night. I think this is about the perfect amount of snowfall, not too much and not too little. Although the temperature was in the 20 degree range and there was a howling wind, I ventured out to see nature at her best. 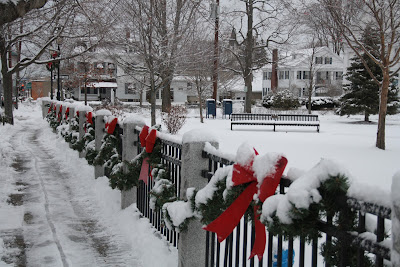 My hometown looks very Currier and Ives-esque after a winter storm. You would think that since snow is white that everything snow covered would look bigger but it is just the opposite. Everything looks smaller and in my opinion more beautiful. 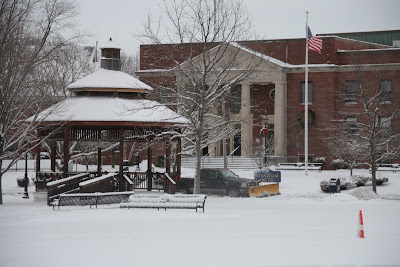 The gazebo on the Town Common looks like something out of a Victorian painting. All we need is a small pondand a few skaters to add a little more romance to the scene. And of course, if we're creating a painting we can leave the snowplow out. 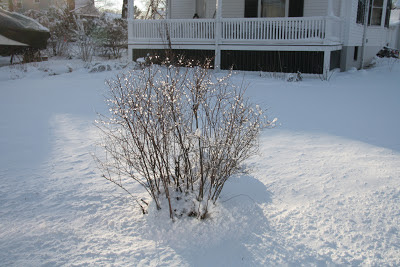 I walked down one of the streets in my neighborhood just admiring the pristine snow. The plants and bushes had little ice pellets on them and they were breathtaking. 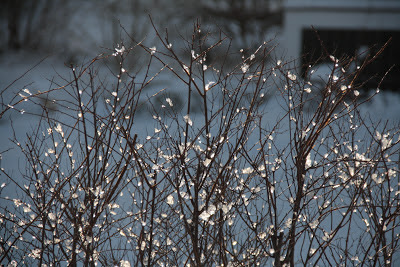 I was hoping the beauty I saw through my lens would translate to my photos but it's not quite right. In person, it looked like crystals and diamonds were shining on the trees in the late afternoon sun.  As if someone had flicked a switch and turned on thousands of twinkle lights. 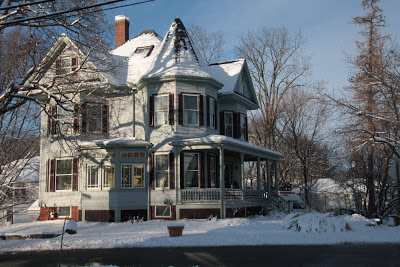 The snow has a way of hitting just the right spots on a house like the turret on my friend Kim's house. 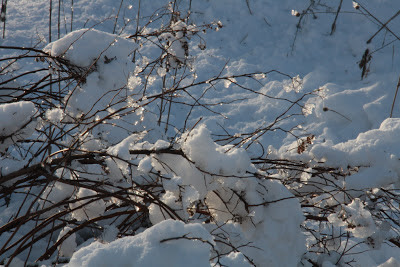 I tried to zoom in closer to capture nature's crystal and diamonds on the branches. 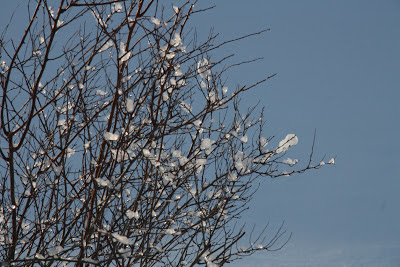 Smow is really nature's jewelry. There is nothing prettier to me. It is special because it is so temporary. The ice on the branches melts once the temperatures rise so it is constantly changing. 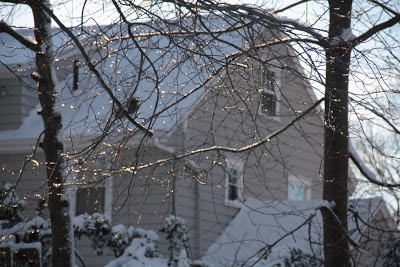 Once the sun hits those icy branches, the melting begins, but not today. It was too cold for any melting and I was able to enjoy nature's illumination. 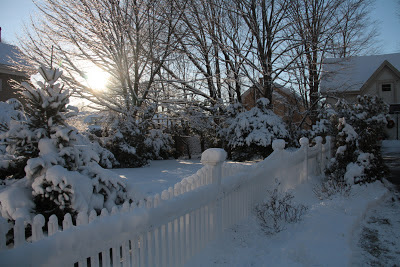 The snow and ice made for some magical views. And the sky would eventually turn a lovely pastel pink. Had my fingers not been flirting with hypothermia I would have stayed to record the beautiful sunset. 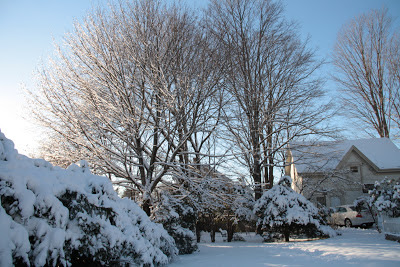 Icy coldness just adds to the flavor of the shot and makes the painfullly numb fingers and face worthwhile. 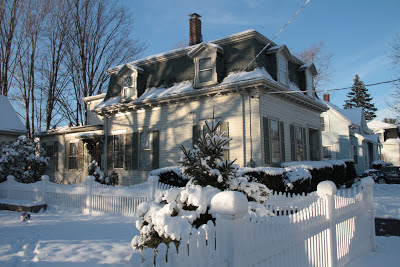 Some of the homes looked Christmas card perfect. The snow was better than any holiday decoration. 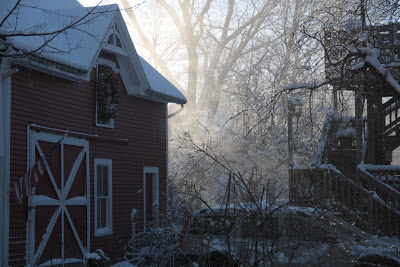 My neighbor's yard took on a wintry mystique. A big gust of wind blew snow off the barn roof just as I was taking this shot. So cool! 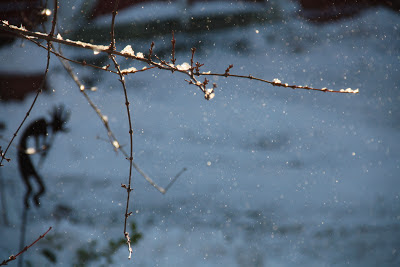 His garden ornament was dancing for joy at the beauty around him. Or maybe he was just trying to keep warm! 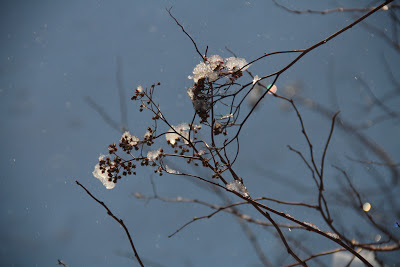 Leslie's Garden said…
What a beautiful town you live in. So pretty when it is dressed in it's winter finery:)! Every picture a postcard!
December 31, 2012 at 11:00 AM

Little Susie said…
i'm your newest follower, i found you while reading one of my fellow blogs...

anyways, i just wanted to say ''hey'' and that your snow pix are just beautiful....we don't get snow to speak of every year, and so far none, so these pix of your's were a real treat, and your town is gorgeous and yes, ''currier and ives'' ideal christmas town.....

i have a few lighted buildings too, and enjoyed seeing your friend's display....i'm up to the point of needing to figure out more space and levels and so thank you for showing how they have done their's with the one skirt across the entire display......

it didn't snow here last year, so i'd totally forgot of how yes, your hands freeze, because if you take pix in gloves, it's hard to use the camera....

anyways....i just had to say ''hey'' because your pix are gorgeous and captions about ''diamonds as the sun hits'' was just perfectly worded, it's so true and part of the magical part of snow.....

the barn photo is phenomenal...i can't say enough about it...contest worthy it is so cool...such a nice collection you did with the red bows along the fence, the victorian house with the turret and the one with the sun gleaming through the huge trees....

we don't have gorgeous scenes like these in this town, so photos like your's are special to see for this carolina girl

thank you for this post, it's quite beautiful, i take snow pix when we get it, and identified with what all you said about taking pix of snow, wanting to capture the sparkling diamonds, and the camera not picking up on that aspect...then your hands freezing, lol.....susie

Ocean Breezes and Country Sneezes said…
I can't think of a prettier place to be than New England after snowstorm! Your photos are beautiful.
January 6, 2013 at 7:10 PM