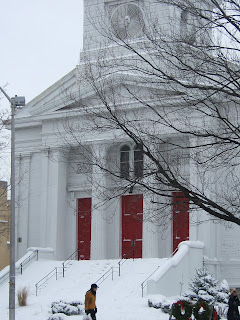 I had a vacation day from work today and my plans got cancelled so I offered to help my sister with her Christmas shopping. She had made a list so it seemed like an easy task. She wanted me to go to one store in Harvard Square, Joie de Vivre, a small very quirky shop on Massachusetts Ave or Mass Ave as we natives call it.

The forecast was for wind driven rain but not too cold temperatures. I wore a light rain coat, blue jeans and snow boots. It was steadily raining but the monsoon had not arrived yet.

Parking was a nightmare. It usually is in that area but it was exacerbated by those doing Christmas shopping. I could not find a space near the store so I circled around to the opposite side of this busy street. I found one, not real close and the meter was for a mere 30 minutes. I hoped the meter maids did not want to go out in a nor'easter and I could be spared a ticket. I rushed out of the car and hurried to the store.

What a great store, Joie de Vivre. Lots of retro stuff, many low priced items, wacky stocking stuffers, and hilarious cards. Of course, 4 of the items on the list were sold out. So I improvised. Got some great stuff. My sister said if I found something I liked to get it because she needed a gift for me too. I bought a lamp for my new downstairs office. Photos to be posted later.

After visiting a second store, the Paper Source, for wrapping paper and a few small gifts, I took a mochaccino break at Rosie's Bakery.  At this point, the wind driven rain had arrived. I could not see my car and I figured the parking ticket was a certainty. I added a Mediterranean omelet to my drink order and I settled in to enjoy my breakfast.

Afterwards, I ventured out into the wild and wooly weather. You know, the kind of weather that if you were driving on the highway you would pull off because you couldn't see two feet in front of you. Umbrellas were virtually useless as they immediately blew inside out. I was having a hard time holding on to my 3 parcels. It took forever to cross the street, traffic, puddles, yuck!  I was not amused.

I walked up the street a couple of blocks and could not find my car. At this point, the paper shopping bags were saturated and so was I.  One of the paper bags was starting to rip. I thought I would try to find a shop that had plastic bags and so I entered City Sports. The nice clerk said he would get me a plastic bag but came back with clear trash bags for me. He said he brought me the clear trash bags so I wouldn't look like a homeless person. Mmm, ok.

Continuing up the street, I still could not find my car. I turned and started walking in the other direction. The rain was coming down sideways and the winds were kicking up. My jeans were soaked and sticking to my legs. The water was dripping off my hair and rolling down my neck. I was getting chilled.  My bangs were so wet I had to slick them back and then the rain was hitting my face and eyelashes so hard I could hardly see. Plus when it is raining that hard it actually hurts. Real nice on my broken nose.

I walked into a store named Nomad just to get out of the rain and catch my breath. My arms were hurting from carrying my packages awkwardly so they wouldn't drag on the ground. The store had beautiful handcrafted items from all over the world. A young woman came up to me and said she would take my packages and put them behind the counter. She saw they were trash bags and then she told me she would just leave them by a display that she couldn't put them behind the counter. I told her no, she would not leave them out in the open and I took them and left the store. I am convinced she thought I was a homeless person and that's when her attitude changed.

I realized my car was not on this end of the street so I backtracked again. While I walked, I planned out all the wonderful things I was going to do when I found my car. A hot shower with my favorite Philosophy salt scrub and shower gel, a hot cup of tea and a gingerbread cookie while relaxing on the couch under my soft plush blanket. Aw, yes that will be wonderful but then my thoughts turned to the homeless. What if I were homeless and I got caught in the rainstorm and had no other clothes but the ones I had on? How would I ever get dry or warm? And how would people treat me? Would anyone help me? The temperature was scheduled to drop after today. How would I survive? I don't think I would.

Finally I found my car and I was never so happy to see it. I immediately turned up the heat to the max and I drove straight home. Christmas music on the radio and out of the rain, my mood immediately improved.

I arrived at home to see the entire contents of my recycling bin strewn across the driveway, lawn and the neighbor's property. Cat food cans everywhere, water bottles, plastic take out containers. and a Tidy Cats Kitty Litter container. As I picked up the debris it was still pouring. This discomfort is temporary I told myself.  You are minutes away from a hot shower, clean clothes and that cup of tea. 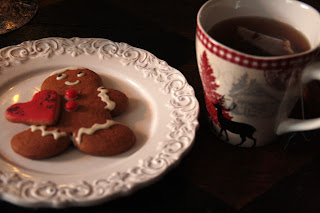 And finally, after the hot shower, I had my cup of tea and gingerbread man. While I was in the shower the sun came out!

Today's trials and tribulations had an impact on me. Just yesterday I had decided to join the 26 acts of kindness movement when a friend posted about it on Facebook. The 26 acts idea was created by NBC News' Ann Curry and was posted on Twitter at #26acts. Last night, I was thinking of doing things that the victims of the Sandy Hook shooting would have cared about but now I think my random acts of kindness will be centered on the homeless.

I found a non profit organization called Birthday Wishes and I am going to volunteer.  Their mission is to bring birthday parties to children living in shelters. Some of the shelters allow volunteers to come in and interact with the kids.  Other shelters are called safe shelters and the volunteers put together birthday boxes of gifts and supplies but they can't attend the parties. I am excited about this opportunity and I am going to round up my own group of volunteers.

So how about you? Are you in for #26acts? I did my first one today, Christmas shopping for my sister.  I have 25 more opportunities for kindness.

Kay Ellen said…
Oh my goodness Elaine, glad you are ok and you found your car! That must have been a very scary,frustrating outing.

Blessing others with acts of kindness is important...so many people hurting in our own backyards!

Donna said…
Well I have to say the first part of your post had me laughing hilariously (not meanly, you just have a style of writing that I connect to, and I knew you were okay after all the trials and tribulations since you were posting this!)... But by the end I was much more somber. It's so true what you said. One of my girls attended her work Christmas party in the city last week. In advance, she and her boyfriend made up 'goody bags' with a pair of gloves, gift certificates for Dunkins/Starbucks, some fine wrapped chocolate candies, and some other assorted goodies. She and her boyfriend handed them out while in the city.
I think your idea is just lovely. You're going to bring so many smiles to little ones who have so little.
I'm going to put my thinking cap on. Gotta love Ann Curry!!!
Merry Christmas to you!!!!
Donna
December 22, 2012 at 12:29 PM

Castles Crowns and Cottages said…
OH DEAR does this bring me back memories of living in Mass. We often went into town for some great shopping. My husband studied and earned his Ph.D. from Boston Univ. and we frequented Harvard Square on Sundays! But the weather you are describing is ALL TOO RECOGNIZABLE and I will never forget when we first moved to Mass. in 1986. We lived in Rockport and heard about this GREAT STORM coming...I took my umbrella with me and went over to the NECK and walked around the little town. The winds kicked in and there went my umbrella, POOF! Up it went, tumbling in the wind inside out...some woman comes by and sees the umbrella rolling in the street and says in her New England accent, "What idiot brought an umbrella to a storm?" I did...an idiot California native who wanted the thrill of seeing the waves crash!!!!

French-Kissed said…
You are a great story teller and I could just see you in this predicament and was amused with the details of it all, but you are so wise to receive the message that you did from your ordeal. Helping others is one of those things where no matter how much we give we always seem to get more in return. Thanks so much for your blogging friendship and for all you have given through your wonderful posts. Joyeux Noel to you and yours!

Fete et Fleur said…
"What an afternoon!" This quote is from the movie Emma. Whenever I have a day like this, this is what I say to myself. I love your photo of the gingerbread man and tea. So glad you have decided to help out the homeless in your area. This is a lovely thing to do. Wishing a very Merry and Blessed Christmas.