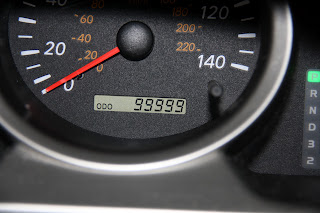 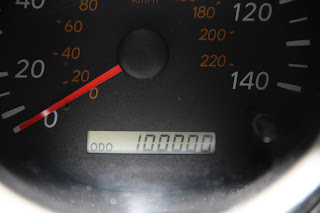 Then 100,000 came next. A milestone in the life of my car who I affectionately call Fiona Rose. She's almost 8 years old now. As far as Toyota's go, she is probably at mid life. Maybe ready for AARP but definitely not ready for retirement. At least I hope not.

She's taken me so many places, like Rockport for afternoon tea by the ocean or a nice dinner followed by a sunset photo shoot. We've gone to Cape Cod for daytrips and she's even ridden the ferry to Martha's Vineyard. I think she likes boat rides.

She often goes to Maine and New Hampshire and she's been to Rhode Island several times. She definitely loves to sit by the ocean.

She holds my coffee for me on a daily basis and sometimes the aroma of take out food sticks with her longer than it should.

Sometimes she is vocal but most of her ailments have been minor except for the accident in 2009. She had to be "hospitalized" for three weeks and despite her many recycled body parts she was as good as new when she returned to me. She is a trooper.

So as we hit the 100,00 mile mark I hope we can have many more adventures and  good experiences before we eventually part ways.
Email Post
Labels: Fiona Rose Toyota

Ocean Breezes and Country Sneezes said…
Fiona Rose is indeed a good friend! Our last vehicle gave us 330K miles! We found that as long as you speak nice to them as they age, they will deliver!

French-Kissed said…
I identify...my car has 118,000 and I'm hoping to have her for another hundred or so...she is like a best friend...I actually cried when I said goodbye to my last car. May you enjoy many more happy and safe miles together. Hope you are having a great summer.