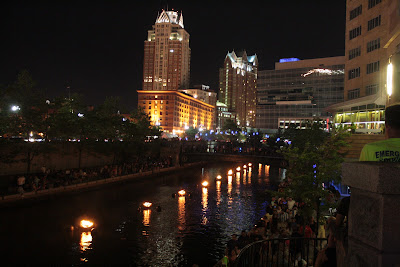 One of the items on my bucket list was a visit to Waterfire in Providence. I've told many people about Waterfire and it seemed like everyone had seen it but me. 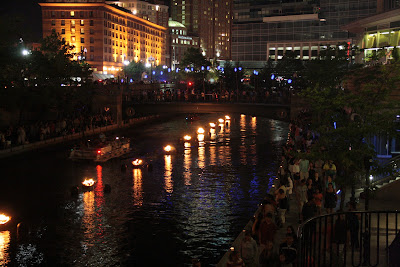 We arrived in Providence about 8:30 PM, a full hour and half late. My sister and I were supposed to meet friends at 7:00PM but we were delayed by torrential rain, thunderstorms, and believe it or not a mudslide on the highway.  The rain was so bad, roads were flooding so we decided to pull off the road and get something to eat. After the storm passed, we got back on the highway only to find a huge traffic backup. As we got close to the cause of the stoppage we saw a bulldozer removing mud that had covered almost every lane of the highway. There were branches on the side of the highway too. We thought this was not the best start to the evening but we decided to continue and meet our friends anyway. 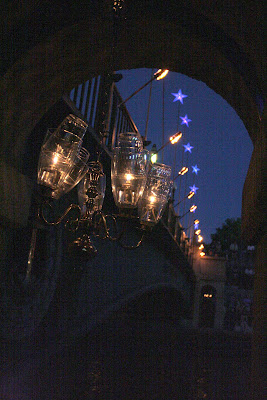 I am so glad we did.  Waterfire was everything I imagined it would be and more. The air was cool after the storm and although the area by the river was crowded, it was not jam packed with people.
One could move around the river area nicely. 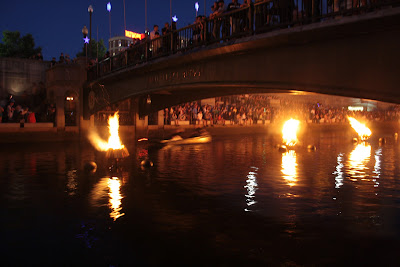 What a vision it was! Volunteers rode by boat, lighting the fires in each metal basket along the river.
Music was piped in, adding to the ambience. The smell of burning pine and cedar was evident but not overwhelming. Gondoliers rowed their boats slowly along the river. I imagined I was in Europe, walking along a canal on a summer's evening. 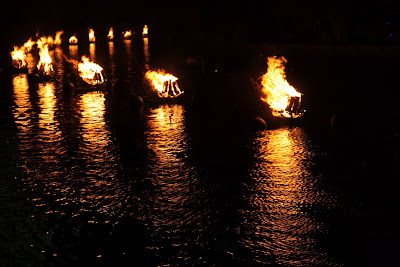 The fires were mesmerizing. As the fires died down, more wood was added to the baskets. The reflections on the water were spectacular. Waterfire lasted well into the night. 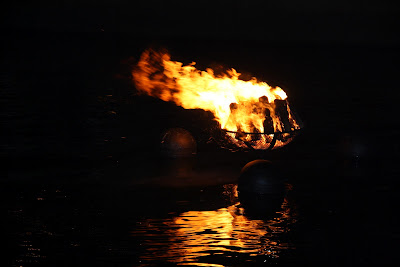 Here's a better view of the basket with the fire. You can see the bumpers which prevent the boats from getting too close. 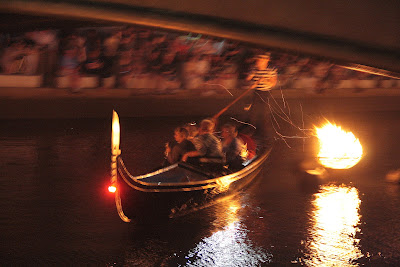 It was difficult to take photos in such low light. I struggled at first. Although this photo is blurry you can still see the beauty of this gondola.  The gondolier could have been from Venice. 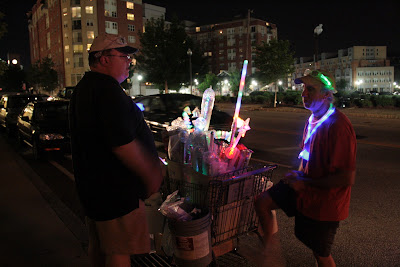 There is more going on than just the fires in the river. A masked man threw flowers to the crowd from his boat. My sister caught one and the flower had a ribbon tied to it that had a quote on it.

My sister commented that the event reminded her of the time we went to the Winter Olympics. There's much more going on at an Olympics than just sport. When we went to the Calgary Olympics, we went to cultural activities too.

There are vendors for food and souvenirs at Waterfire. It is primarily funded by private donations and so fundraising is very important. It determines how many lightings there are during the season. Corporate sponsorships certainly are needed and anyone can donate. Check out the website at
www.Waterfire.org 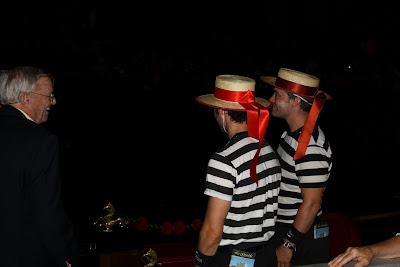 Here are two of the gondoliers as they wait for their boats to be readied. 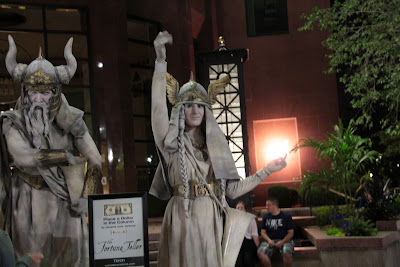 The living statues were quite popular. They were so graceful in their movements. 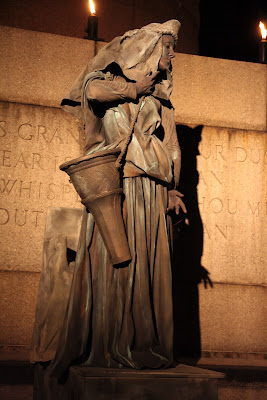 I think this one was my favorite. She really looked like a statue. How do they stay that still? 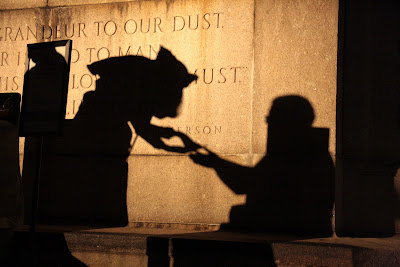 Her silhouette was interesting as she handed a man his fortune. 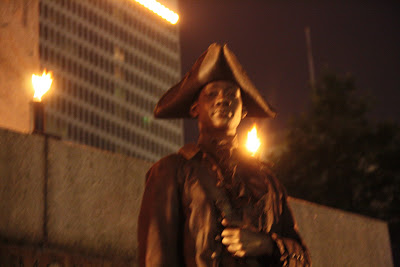 Another photo that did not come out sharp but I thought it blogworthy. 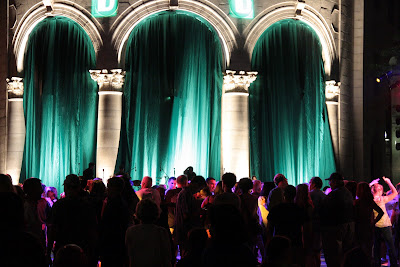 TD Bank sponsored an outdoor ballroom. Swing dance lessons were given early in the evening and then there was a dance party until 12. 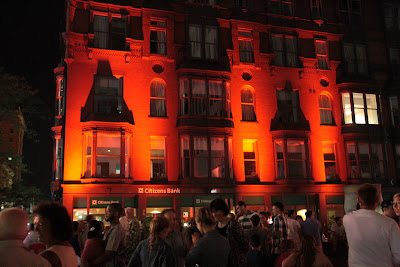 Some of the buildings were illuminated with flood lights. 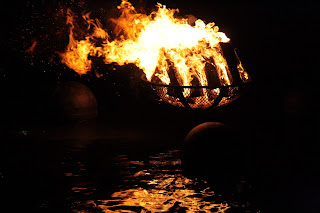 The evening was magical. It was only one evening but I felt as if I was on a European vacation with all the time in the world to experience the sights and smells of something truly wonderful. I would love to go back to Waterfire perhaps in the Fall when the air is cool and crisp. And before I return I shall practice my nightime photography!
Email Post
Labels: Providence Waterfire

A New England Life said…
What a great evening, Elaine! It looks picture perfect!
You are always doing something fun! Maybe I need to take note ; )
June 25, 2012 at 3:23 PM

Ocean Breezes and Country Sneezes said…
Omg how beautiful! I haven'tanytging about this! I bet you and your sister had a blast!
June 30, 2012 at 11:00 PM

Ocean Breezes and Country Sneezes said…
Omg how beautiful! I haven'tanytging about this! I bet you and your sister had a blast!
June 30, 2012 at 11:01 PM

Donna said…
That looks like so much fun, Elaine! I'm sending this post to my daughter. She traveled to Zurich, Munich, and Venice in April, and she'll love this!... Donna
July 4, 2012 at 9:25 PM

Kay Ellen said…
Oh I would love to do this...I have only been in the New England waters on a duck tour! haha:))