Seaside dining, in a lighthouse! 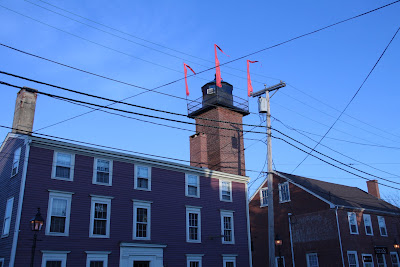 Almost a year ago, I bought a Living Social deal for lunch in a lighthouse in Newburyport. I love Newburyport, there are lots of wonderful shops and eateries and oh yeah, the ocean. There are beautiful historic homes and churches in the town. It's a great place for a day trip. 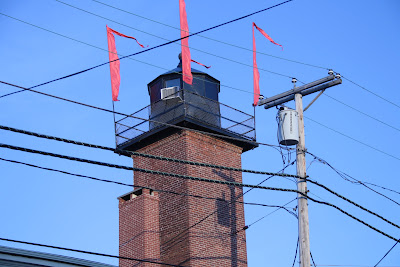 I bought two lunches actually, one for two people and one for four people. I procrastinated and didn't use the coupons right away. I finally called and tried to make a lunch reservation for four people. The only dates left were during the week. Of course, most of my friends work during the day including the two who were supposed to have a lighthouse lunch as their Christmas gift. My sister and I chipped in to buy the Christmas gift so my sister and I ended up dining at the lighthouse last night.

Jay at the lighthouse was very sweet.  He not only agreed to do one dinner instead of lunch but he said I could extend the other lunch coupon until the end of March.  It was supposed to expire in mid March. I am so pleased that I have more time to make arrangements with my friends. 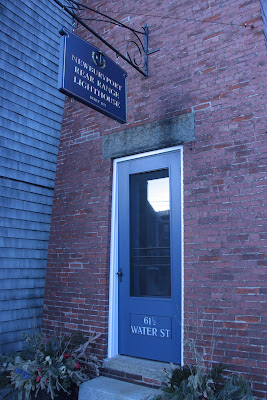 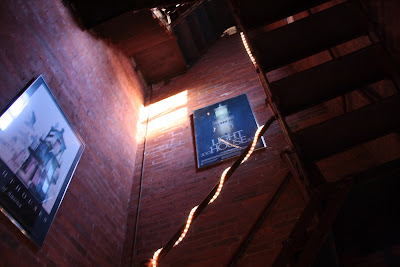 The dining area is five flights and one 6 foot step ladder up. The coupon mentioned that you must be physically capable of climbing the stairs and the ladder. Once you reach the top of the ladder you need to go through a hatch and then you are there. 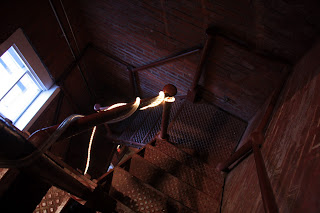 The climb was not bad at all.  I expected far worse. And once we got to the hatch... 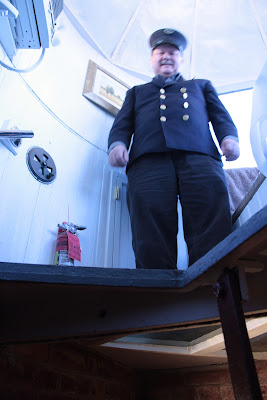 Jay was waiting for us.  He helped us through the hatch and greeted us with a smile. 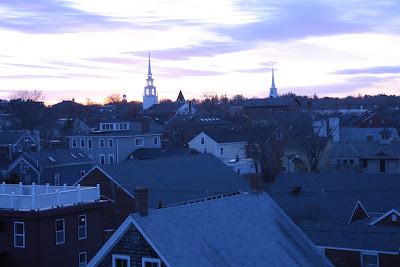 Yay, I was so excited to see the sunset from the top of the lighthouse. 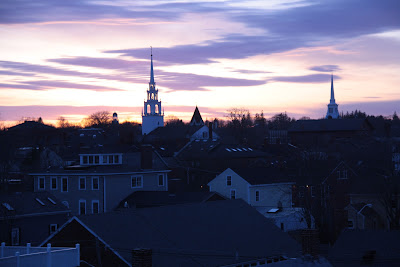 This photo was shot from the walkway of the lighthouse.  It is very narrow and last night the wind was really gusting. I don't want to know what the wind chill was but it was mighty cold. 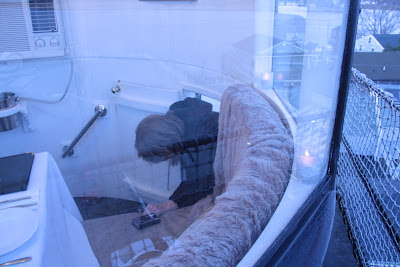 If you want to go out to the walkway, you must crawl through a little doorway from the lighthouse. My sister demonstrates the technique. 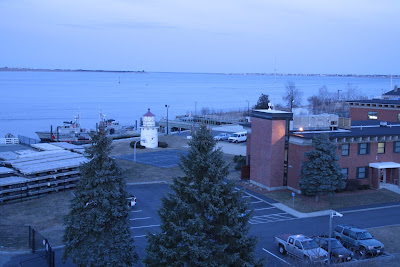 There's the ocean! And to the right is the coast guard station. Despite the wind, it was a beautiful night.
It was clear and starry. 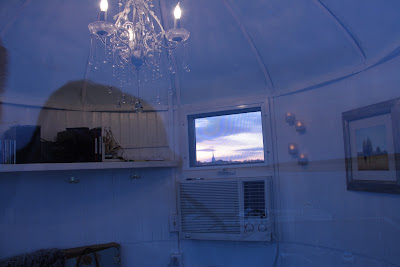 The space is 8 x 8 so it's really small. The ceiling is high. There is heat for the winter and a/c in the summer so the lighthouse is open for dining year round. I took this from the walkway outside the lighthouse. 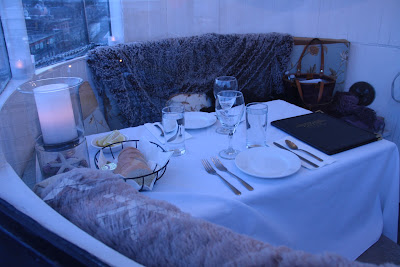 Here's a closer look at the space. All set for dinner. Such a sweet little space to enjoy a meal. 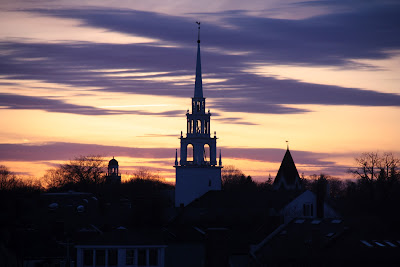 Another shot of the sunset and the cool steeple. This photo does not do it justice. Actually none of the photos really depict the beauty of the experience. 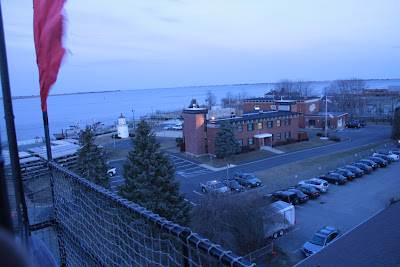 Another shot from the walkway. I was getting mighty cold at this point. The wind was going right through me. See how I suffer for my art! 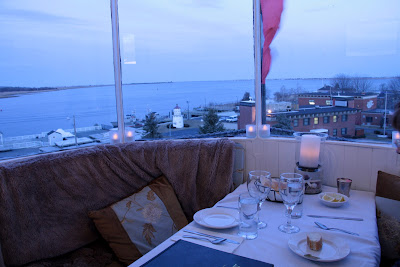 Jay proclaimed us official lighthouse keepers for the evening.  We had the place from 5-11PM. He also told us about the history of the lighthouse and pointed out some landmarks. 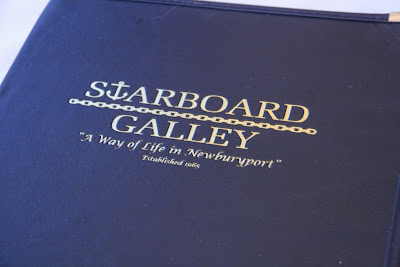 He gave us our menus so we could make our selections. The menu is from the restaurant next door. Jay would climb all those stairs and the ladder with each course.  Quite the workout! He says he sleeps well. 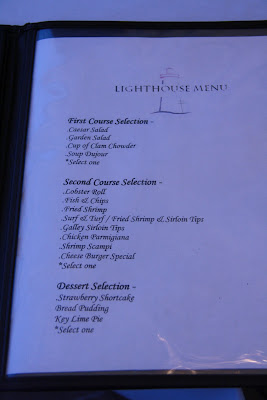 Both my sister and I ordered clam chowder and the fried shrimp with baked potato. She had strawberry shortcake and I had key lime pie. It was all delicious. 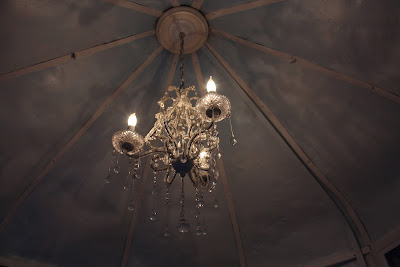 I really was fascinated with the chandelier.  It added a touch of elegance to the space. 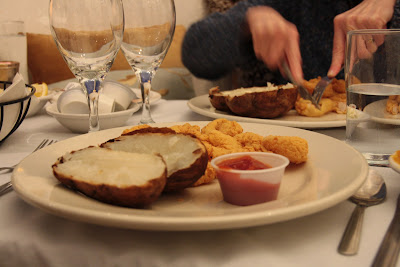 Dinner arrived and we were not disappointed. We could not imagine carrying hot food up all those steps! Jay didn't spill a drop. 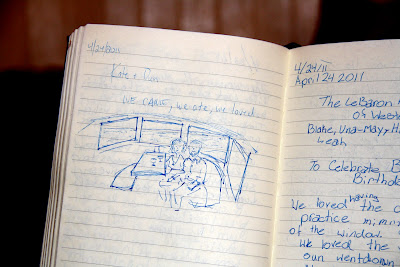 We decided to check out the keeper's log. I especially liked this entry with the sketch and the
comment. "We came, we ate, we loved". 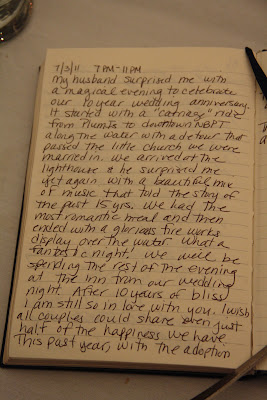 I loved reading all the entries in the keeper's long.  Lots of marriage proposals, birthday celebrations and anniversaries. This entry by Rachel was written on her 10th anniversary.  Her husband surprised her with a carriage ride by the church where they were married, then dinner in the lighthouse, and fireworks by the ocean. So romantic!  Sweet memories for everyone who wrote in the book. 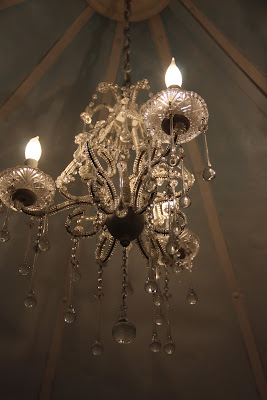 I would love a chandelier like this for my home. So much bling! Fantastic! 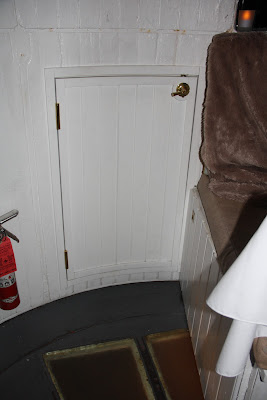 This is the small door leading to the outside walkway. You can see why I said you need to crawl out to the walkway. 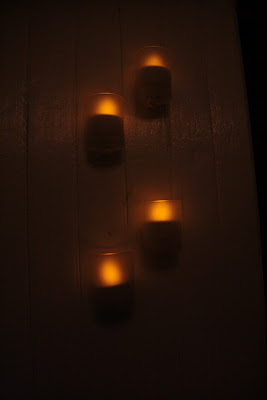 More flameless candles on the wall.  They were scattered around the lighthouse. 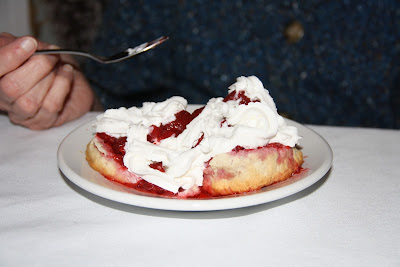 My sister enjoyed her strawberry shortcake. And we both enjoyed the evening. A unique dining experience with time to relax between courses. I can cross this off the bucket list.
I highly recommend dinner at the Newburyport lighthouse on Water St. For reservations, check out the info on their website, www.lighthousepreservation.org.
Email Post
Labels: dining lighthouse Newburyport

From Beyond My Kitchen Window said…
Oh Elaine, I'm calling for reservations. What a gorgeous place to spend the evening. I just read all the menus from the three restaurants, it must have been hard for you to choose. Great post, it rivals the Fenway post, almost.
March 1, 2012 at 6:59 AM

Ocean Breezes and Country Sneezes said…
What a fabulous place to dine! I know my husband would love it! He's enjoyed lighthouses long before they were popular!
March 1, 2012 at 6:48 PM

Castles Crowns and Cottages said…
Oh, I just love New England! I remember when I lived in Rockport, Mass. and then S. Hamilton and Beverly, just across the cove from Salem. Your wonderful views of the steeple and other quaint town buildings reminds me so much of my life there, and I remember when I saw my first lighthouse; it was a thrill. BUT TO GO INTO ONE that is a restaurant? MAGIC!!!!!!

THANK YOU so much for your kind and warm greetings, and it really is special to me that someone would read my blog at such a special hour of the evening, to send them off to a peaceful state. Enjoy the weekend coming up...I AM GLAD IT IS FRIDAY!!!!

Kay Ellen said…
I my goodness! What a fun location for dinner!
Looks incredible:))

A New England Life said…
How I'd love to have dinner at the lighthouse! I looked into it once but it was more than we could afford. Maybe one day we'll make it happen.

I love all the pictures and quite honestly I think you did do it justice, Elaine. I'll bet Jay has some strong legs after all the ups and downs he's made!

Thanks for sharing such a wonderful evening with us!