Percy is a TV star! 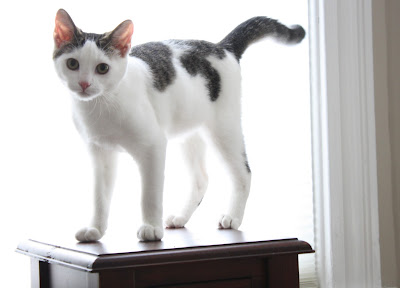 Percy was featured on the Boston television show Chronicle a week ago today. The TV station posted on their website that they were doing a show about Cats and they wanted viewer photos. I entered a photo of Percy and it was one of over five hundred entries.

I wasn't sure if I would be home the night the show aired so I DVR'd it. At the end of the show, I saw my photo. They picked my shot of Percy!

Percy doesn't seem to be too excited about his TV star status. I really hope he'll be discovered soon. It could be the start of a wonderful modeling career.

Robin Larkspur said…
A handsome lad indeed! He looks like he is on a podium, allowing his fans to observe his beauty!!!
February 16, 2012 at 9:50 PM

Fete et Fleur said…
How fun! You sound very inch the proud Mom. He is gorgeous!

Blondie's Journal said…
Hurray for Percy. And for you!! Now I am off to have a look at the video. Wow...you must be so proud!

From Beyond My Kitchen Window said…
Wow, so exciting. I watch Chronicle must must have missed that episode. I bet he was the prettiest cat.
February 17, 2012 at 7:20 AM

Castles Crowns and Cottages said…
Oh my his is precious! I just went over to your link and saw this megastar!!! What a dear little fellow! AND THANK YOU FOR VISITING! Yes, that is a yummy heart-shaped macaroon!!!! HAVE A GREAT WEEKEND! Anita
February 19, 2012 at 6:04 AM

Terry said…
Hello!
I just tip toed my way over to your sweet blog after reading the comment that you left on Miss Mustard Seeds recent post on blogging. I will be back to visit your blog again....I enjoyed the pretty pictures and your adorable kitties! :)
Terry from Maryland
February 19, 2012 at 4:12 PM