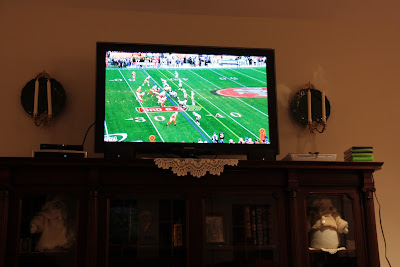 So this weekend was a long weekend and I had three days of R&R. Sweet!

I planned to stay home Saturday night and watch the Patriots- Broncos game by myself. Such a fan am I that I like to watch the game without distraction in the comfort of my own home. I guess I am a football snob.  I was invited to a playoff party at my friends Deborah and Roger's home. I accepted the invite and so I went to the party with my friends Kim and John.

We had a wonderful time at this small gathering. Great food and great company. They made sure I got a front row seat and I was in heaven. I had a fireplace with a roaring fire on my left, sandwiches and snacks on the coffee table in front of me, and a large screen TV with the game playing right in front of me. Football viewing perfection! 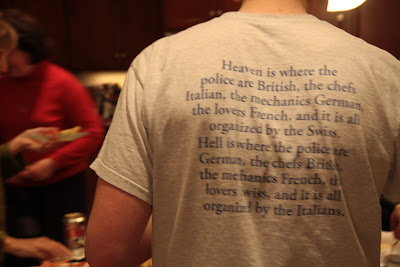 I just had to take a picture of Nathan's Tshirt. He is the youngest son of Roger and Deborah, Nathan made an appearance as Santa at my Christmas Soiree. I think his picture is on that post. 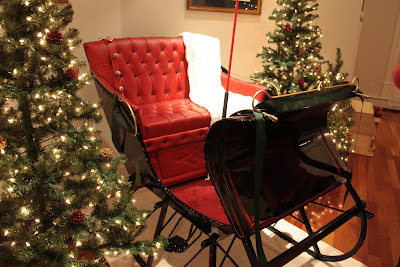 Kim and I were admiring the sleigh in the living room and Deborah told us the story of how they acquired it. Roger and Nathan thought they should get a sleigh for the front yard for the holidays. They looked at  a number of antique ones but this one is new and it can actually function as a real sleigh. The price was comparable to the antiques. It was made by the Amish and they only make 12 each year. It is magnificent! 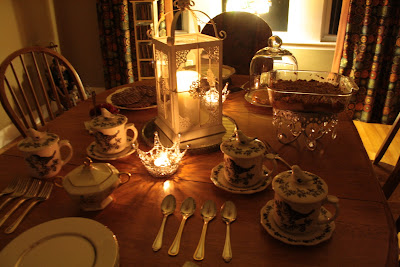 On Sunday, still euphoric from the Patriots win, I decided to have a couple people over for coffee and dessert. I made an apple crisp and my sister made a lemon cheesecake out of lemon curd. 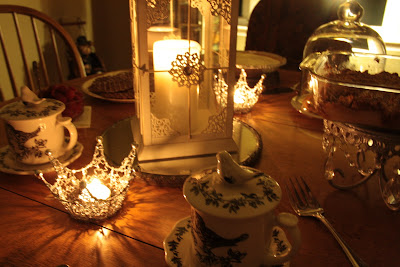 The four of us also had chocolate pizzelles and cornmeal ginger cookies. It was a nice
laid back evening. 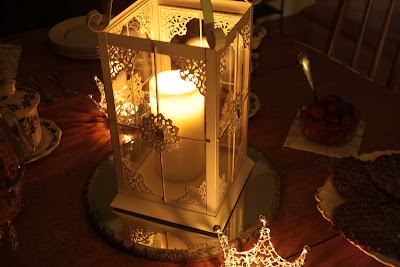 I was excited to use my new lantern purchased after Christmas at Pier One. It gives off a nice warm glow. 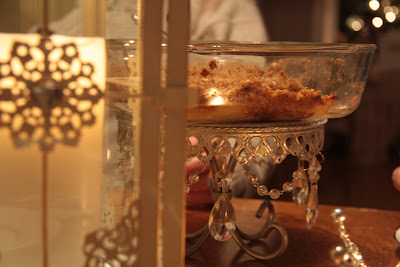 I used the recipe from one of my Susan Branch cookbooks for the apple crisp. It is super easy and takes no time at all. I decided to rest it on my silver cakestand with the crystal drops. You can't go wrong with crystals and candlelight for simple elegance.
We drank tea and coffee out of little bird mugs. You can see them in the photos above. I love black and white toile. Each mug has a cover for keeping the beverage warm and a saucer to limit spillage. I don't  have many of the mugs so I can't use them with large groups.
I had a nice relaxing weekend. How about you? What were your plans?
Email Post
Labels: dessert football weekend

Michelle said…
What a fun weekend! Sometimes I wish I lived closer to you...we're such kindred spirits! Love that lantern, oh and that apple crisp!!!

Blondie's Journal said…
Wow...you really had a nice, relaxing weekend {if you can call football relaxing, especially after your team won!!}. I wish I liked football, everyone looks like they are having so much fun watching and cheering!! I tend to concentrate on the food! lol! I love the sleigh, how unique! And I really had a good laugh over the T shirt!

You had a nice wrap up for the weekend. You need to do a post on how to have a proper tea. You are so good at setting the right atmosphere...I love your pictures in low light. The lantern is really pretty, as well as your cake plate! Great post!

Ocean Breezes and Country Sneezes said…
I'm a bit of a Pat's nut myself! Can't wait until we stomp the Ravens! LOL!!!

We also had a relaxing evening in Maine, we had some friends over and throughly enjoyed watching the Bronco's get a trashing!

Your tablescape looks beautiful, and the desserts sound delicious, I like your new lantern too, it goes nicely with your tiara's!

Thanks for stopping by, I'm glad you enjoyed my lobster ruben! I love Stonewall Kitchen too!
January 19, 2012 at 6:39 AM

Valerie@chateaualamode.typepad.com said…
How gorgeous was your table. Loving the lantern from Pier 1....love candles so much and the glow they give your room. Love Susan Branch's cookbooks I'm sure your apple crisp was tasty and lemon cheesecake, my heart be still! Happy weekend!
January 20, 2012 at 5:53 PM

French Kissed said…
sounds like a wonderful weekend last...think you might be getting some snow this one and if so those lanterns will so so pretty lighting a snowy evening...am sure your guests enjoyed that beautiful presentation of delicious desserts