Percy, has it really been a year? 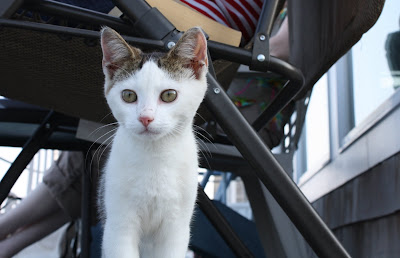 I can't believe it's been a year since Percy wandered into our lives. I say our lives because it was a team effort to get him to where he is today.

He was just a little tyke when I first met him at my friend's rental cottage by Nubble Light in Maine.  I remember it was exactly one year ago today.  My friends had already met him and he captured their hearts.  They were looking out for him, leaving food and water for him.  My friend Mary accidently dropped a meatball out on the deck of the cottage and Percy gobbled it up and he was nicknamed Meatball for the duration of his stay by Nubble Light. 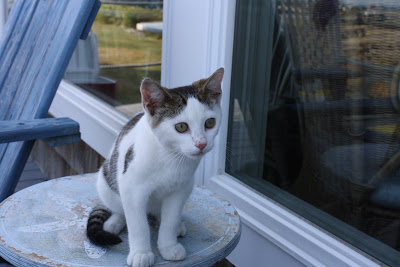 A hurricane named Earl was predicted to bring high winds and torrential rains to the coast of Maine and none of us were going to let this little kitten stay outside in that kind of weather. So he was transported to Massachusetts to stay with me for a while. 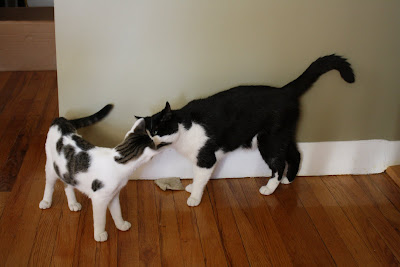 After only two weeks, he was mixing it up with Oscar.  Oscar liked having a new playmate and so did  I.  I grew very attached and so I ended up giving hima permanent home with me and Oscar and Molly. 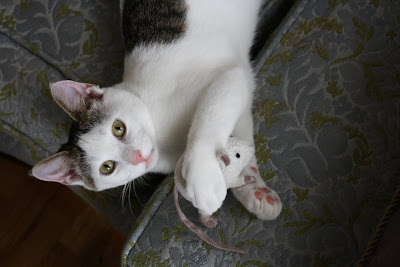 It certainly didn't take him long to make himself at home. His mousey was his constant friend.  He would bathe it in his water bowl and try to get me to play fetch with it. 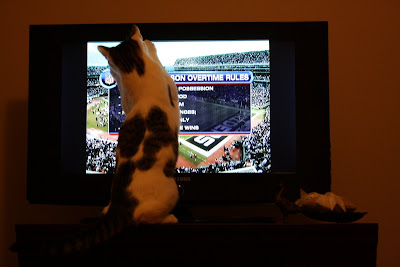 Percy may be cute but he frustrated me plenty in those first few months.  He became a one man wrecking crew. He ruined 2 of my dining room chairs, broke countless dishes and a few teacups, tore holes in my shades. 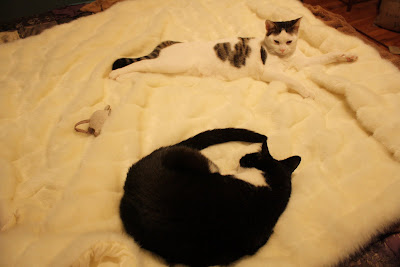 ﻿
There's Mousey with Oscar and Percy.  While Oscar sleeps, Percy plots his next attack.  He wants to play just about 24/7. 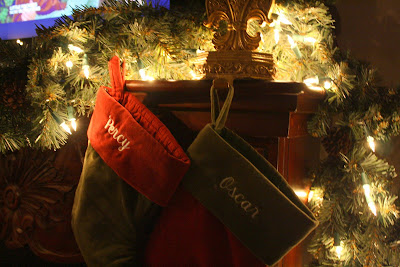 At Christmas, Percy got his very own stocking with his name embroidered on it. He really enjoyed his first Christmas. 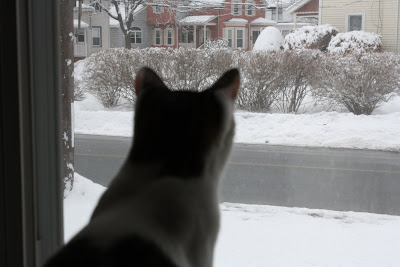 Percy loved to watch the snow fall and we had a lot of it last Winter! 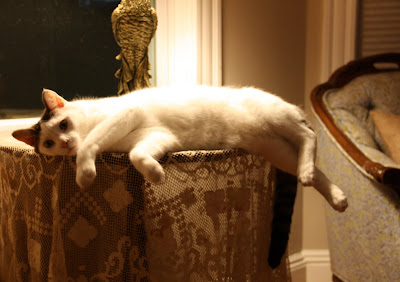 Now Summer is almost over and Percy is just about full grown or at least I hope he is!
I hope that Percy eventually gets along as well with his sister Molly as he does with his brother Oscar.
Only time will tell!
Email Post
Labels: Percy stray kitty

Robin Larkspur said…
Adorable Percy!! A rascal, I am sure, but so lovable. I am so glad you share your kitties with us! Happy Homecoming Anniversary, Percy!!
September 2, 2011 at 10:22 AM

weaverpat said…
He certainly was an adorable kitten and he has turned into a beautiful young adult.
I can see why the 'a while' turned into FOREVER!!!
Even with the clawing of chairs, ripping of shades and (oh no! not the teacups!!!) breakage, he is irresistable.
Happy Adoption Day to both of you!
September 2, 2011 at 6:08 PM

Ocean Breezes and Country Sneezes said…
Happy Adoption Percy! He's such a handsome guy, I can see why you fell for him!
September 3, 2011 at 12:31 AM

From Beyond My Kitchen Window said…
Percy is so handsome and I'm sure forever grateful in his cat way for giving him such a loving home.
September 3, 2011 at 5:02 AM