This was supposed to be a success story 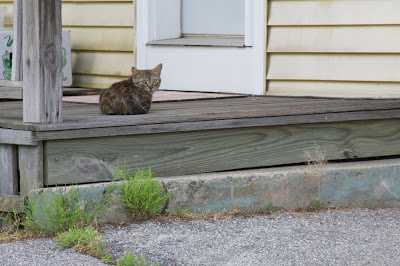 "This was supposed to be a success story" said my sister in an email to me on Monday. That's what makes this story so heartbreaking.

Those of you who have been reading my blog know that my sister and I had been feeding a stray cat who had 5 kittens under the porch at my sister's art studio. We know 3 of her kittens survived and were rescued.  But 2 of them are missing.  Maybe someone took them in or maybe they did not survive.  That's Miss Marble in the photo above.

We rescued Miss Marble a week ago Sunday night. She was spayed that next Monday and Tuesday she was returned to us.  We were hopeful she would bond with us so she could find a forever home. My sister would have taken her to her home but my father who lives with my sister does not want pets in the home.

I could not take in a 4th cat.  But I would have let her stay in my office in the basement if we didn't find a home for her by Winter.  The office has central air and heat and two windows. It would have been adequate temporary housing for her. Not the most ideal but adequate.

My sister's landlord at the studio was captivated by Miss Marble.  He thought perhaps he would like to give her a home but we thought he was not suitable because he travels a lot for business.  Anyway, he allowed us to use the second commercial space in the building for housing for Miss Marble. Rent free.  The tenant had moved out on July 31st so the space was vacant and the timing was perfect!

We thought Miss Marble was recovering nicely and she was looking good and eating well after her surgery. My sister and I were taking turns feeding her and keeping her company. And when we weren't there we had the radio on for her. It's funny, the first time my sister turned on the radio the song was Don't Stand So Close To Me by the Police.  And the first song I heard when I saw Miss Marble after her surgery was I Get By With A Little Help From My Friends by The Beatles.

Last weekend, on Saturday morning Miss Marble didn't look so good.  And she wasn't eating or using her litterbox. My sister was concerned. Saturday night she had not eaten her morning food.  Sunday morning the food was untouched. And by Sunday night still no food was eaten.

I told my sister we needed to take her to the vet. I thought I heard her wheezing. She was lethargic. We put her in the car and drove to the animal hospital for emergencies. I sat in the back seat with her, reassuring her that it was all ok.

Evidently, she was petrified.  At the hospital, she bit the animal tech and escaped from the staff's reach.  She ran the length of the hospital before she was caught.  The animal tech was going to be put on workmen's compensation.

After examination, it was determined she was quite sick.  She might have pneumonia and her pupils were not the same size at all indicating a neurological problem.  It was possibly FIP, a fatal brain disease for cats.  The vet expressed concern for our well being and did not think we would be able to administer antibiotics to Miss Marble twice a day for 14 days.  A positive confirmation for FIP would mean an MRI which cost minimally $3,000.

The vet suggested euthanasia as an option.  We did not want to consider this.  We wanted to get her well but it was not looking good.  We were blown away by this diagnosis. I thought she had the sniffles. The vet said she wasn't eating because cats are driven by a sense of smell and Miss Marble was congested and with upper respiratory problems she probably couldn't smell anything.

While at the vet's office my sister placed a call to the Cat Society lady who had helped us rescue Miss Marble.  She said if FIP was mentioned Miss Marble could suffer.  After that we made the painful decision to end her life.

I think she must be in heaven. Perhaps with her two kittens.  She was a sweet cat, a kitten really. We noticed about two weeks a look on her face that told us she wanted to be rescued. Perhaps she knew she was sick and she knew we could help end her suffering.  If we had known she was sick, we would never have put her through the surgery.  I feel terrible that she went through an unnecessary surgery.
At least she must have felt safe and loved after her rescue.  She actually let me stroke her ear the other day.  It was the first time I touched her.

But she touched us right from the start when we first met her nearly two months ago.  And we will miss her terribly.

My sister said she was wishing for a forever home for Miss Marble but she did not think her forever home would be heaven. She thinks we should be careful what we wish for. 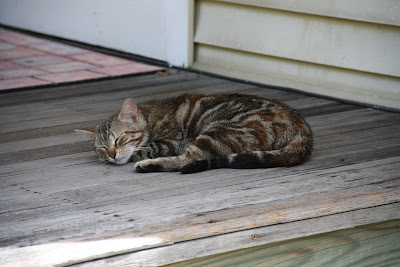 A New England Life said…
Such a sweet girl, and to go so soon. How very sad, Elaine. My heart goes out to all of you. Goodness knows you and your sister did all you could to save Miss Marble.
August 10, 2011 at 6:00 AM

Ocean Breezes and Country Sneezes said…
Oh I'm so sorry for your loss Elaine. Miss Marble was such a beautiful cat. You and your sister were so kind her her, it was probably the only kindness she ever knew. I will be thinking of you.
August 10, 2011 at 7:31 AM

From Beyond My Kitchen Window said…
How kind of you and your sister to invest so much of your hearts to this little kitty. She was such a pretty little girl. Take care and I am so sorry for your loss.
August 10, 2011 at 10:14 AM

Robin Larkspur said…
I am so so sad for Miss Marble and for you and your sister. So sad. We lost two young rescued cats to FIP and it is a terrible thing. Loving cats (and all animals) is so very painful. Hugs to you, and know that your efforts for this sweet little cat were much appreciated. If not for you, she would have had a long suffering end.
August 10, 2011 at 10:56 AM

Tricia said…
I am so terribly sorry. Miss Marble was a special, pretty little girl and you and your sister did all that you could possibly do.

I have also done some animal rescue work and I know that sometimes it can be heartbreaking. Please take comfort in knowing that because of your efforts some of her lovely kittens were saved.
August 11, 2011 at 9:40 PM

Valerie@chateaualamode.typepad.com said…
God bless you and your sister's sweet hearts. So sorry for your loss. Know that you did what you could and showed lots of love.
August 12, 2011 at 1:05 AM

What a terrible story about Miss Marble.

Your blog is so beautiful.
and yes I follow your blog.
Please take a look into my world.

Country Wings in Phoenix said…
Hi Sweetie...
Oh Ms Marble. I was reading her story along, and had such high hopes for her. Everything seemed to be going her way.

You gave her a good ending to her life sweet friend, and she found love in her lifetime. It isn't important for how long, only that she knew love. You both gave her that. How lovely and a miracle story. Thank you for touching my heart and soul this evening.

This is the Miracle Weekend makeover. I am one of the hosting sites. For every comment left, Guideposts magazine will pay a dollar, to the next cancer makeover patient. Please stop by and read the story about 9 year old Charlie, and bless me with a comment. Out goal between the 4 or 5 blogs is 5,000. I know we can do it. I would appreciate it, if you pass the word around to as many friends as possible.

Thank you sweetie for a wonderful post. I love it. Have a glorious weekend. Country hugs from Phoenix, Sherry
August 13, 2011 at 9:26 PM

Edie Marie's Attic said…
Darling Miss Marble is in heaven at the Rainbow Bridge where she will be to greet you and your sister when you go to heaven someday. Until then she will be romping and playing with all our beloved pets that have had to leave us. Oh what fun she is having!!

Jayn Krasco Stillson said…
So sorry Elaine...I know you think this isn't a success story, but Miss Marble could've passed alone and unloved. You saved her from that...
August 15, 2011 at 9:25 AM

French-Kissed said…
So sorry for you and your sister. Its never easy to lose a pet, and having to make that tough decision is heart wrenching although for the best. Her last days were lived knowing she was loved and taken care of. Can only imagine how she would have suffered if she had not wandered into your lives and been in your care. She is no doubt resting in peace now.