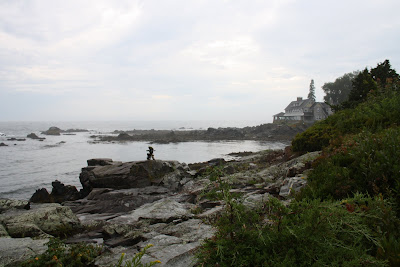 The other day I looked at my attendance calendar at work and I realized I had only taken 3 of my 22 allotted vacation days this year.  If I don't use them by December 31st. I lose them.  So I decided to take one last Thursday. 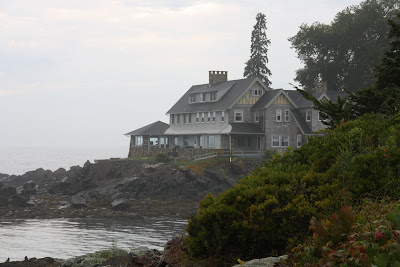 I decided to go with a friend to Kennebunkport, Maine for the day.  We started out with a drive up to Stonewall Kitchens in York.  We did a little shopping and had coffee and enough breakfast to tide us over to until lunchtime.
Rain was predicted but not until the afternoon and we arrived before the rain hit.   We drove by the ocean as the sky got grayer and grayer.  I didn't mind.  I love a moody sky. 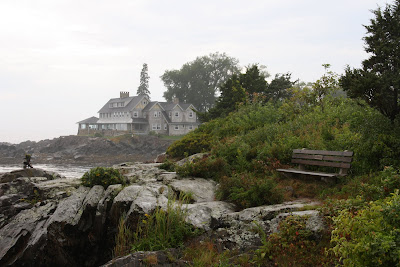 We drove along Ocean Ave, admiring all the beautiful seaside homes and wishing we knew the people who lived there.
Occasionally, we would get out of the car and explore the area.  This spot was lovely with it's wild  foliage and cool rocks.  You can see what the travel brochures mean by rocky coastline. 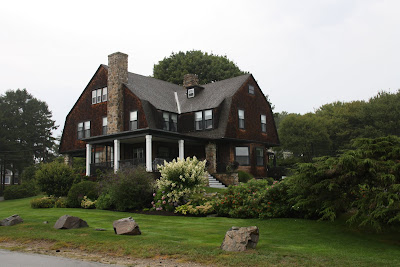 We enjoyed walking by and admiring all the oceanfront homes on Ocean Ave. 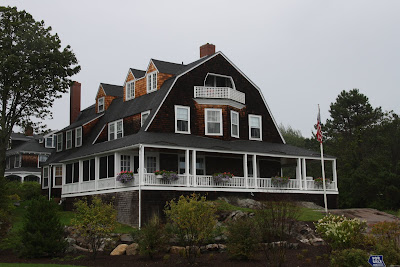 This one had a fantastic porch facing the ocean. 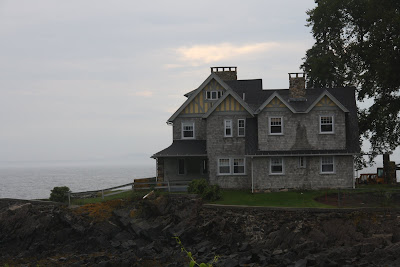 This spectacular home was directly on the water. 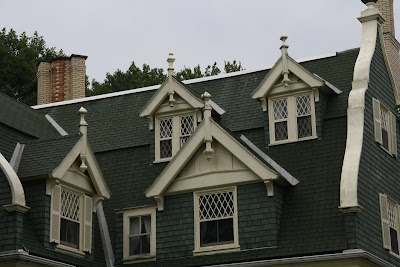 This one might have been my favorite.  Don't you love the architectural detail? 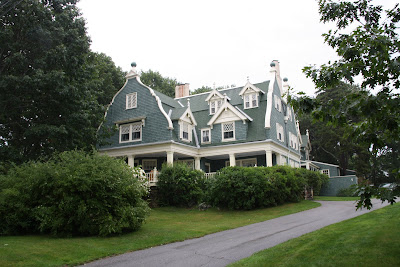 Here's a longer shot of the home. Just lovely!

So sweet, another beauty. 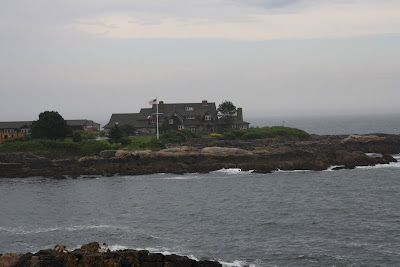 And no trip to Kennebunkport is complete without a trip to the Bush compund at Walker's Point. This is the view from Ocean Ave.  What spectacular views they must have from that house!
\ 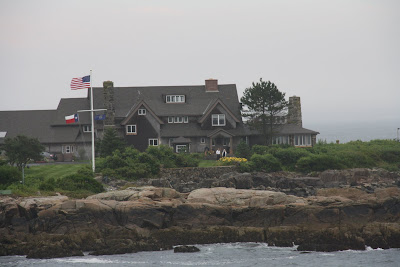 As I was zooming in a bit, a woman who was standing on the rocks called our attention to the people who were standing on the front lawn.  She asked if I could see who it was, she suspected it was Barbara Bush.  I couldn't say for sure at the time.  But later upon closer inspection, it was indeed Barbara Bush and I am not sure about the man next to her.  So I was pretty excited to think that I got a photo of Barbara on her front lawn. ( You can click on the photo to enlarge it). 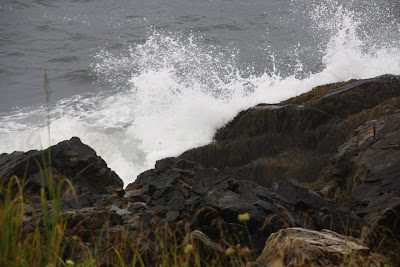 The waves were crashing against the rocks making that sound that I love.  It's actually very rhythmnic and soothing.  If you've ever slept by the ocean, you know it can lull you to sleep.

But no sleeping on this daytrip.  I have more to tell about this day which I will hold for another post. We had lunch at Pier 77 in Cape Porpoise and witnessed a fantastic lightning storm and prior to that we made a stop at Old House Parts to look at architectual salvage pieces.  I found something really amazing but that too is for another post.

Those of you on the East Coast, I wish you a safe weekend.  Let's hope the hurricane does not live up to the hype!
Email Post
Labels: daytrip Kennebunkport

Robin Larkspur said…
Such amazing homes, I loved all the photos you took. Imagine living in one of them...what must that be like!! You are an accidental papparazi, lol, snapping Barbara Bush. Great photo! A foggy day in Maine is just as beautiful to me as a sunny one. Looking forward to more of your Maine photos.
August 27, 2011 at 9:06 AM

Salmagundi said…
I wish that Kennebunkport was just a day-trip for me. I love it, and haven't been there for 3 years. Yes, it does look like Barbara! Great photos. Sally
August 27, 2011 at 10:06 AM

I used to go to Kennebunkport every summer. Those were fond memories that will stay with us forever. Thank you for coming over; how did everything go with the storm? How is your basement!!! Be well, Anita
August 28, 2011 at 7:37 PM

Ocean Breezes and Country Sneezes said…
How nice to capture a photo of Mrs. Bush! Looks like you had a lovely time! Don't you just love Stonewall Kitchen!

Gee, with all your vacation time you could have 4 day weeks through the end of the year! How nice is that!