A Night at Fenway Park 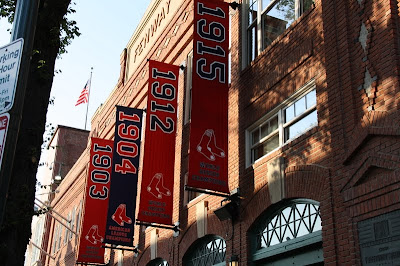 Lucky me! I have a very nice lawyer who happens to be a Red Sox season ticket holder. He gave me two tickets to Tuesday night's game versus the Chicago White Sox. These tickets were for prime seats, in the loge behind home plate.  The seats were valued at $94.00 each!

I was so psyched to be going to the game.  I hadn't been to a Red Sox game in years.  I asked the Manager of my bank branch to be my guest.  She is a big fan  and her father has worked at Fenway Park since 1967. He even has a World Series ring from the 2007 championships! 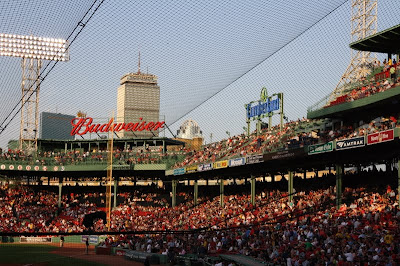 The night could not have been more perfect. I think the temps were in the 60's and
I could have sat outside all night. I was worrying that it might be too hot, too cold or worse
case scenario, rainy. We lucked out because as you may know we had some wild weather on
Wednesday and some tornadoes touched down in the Springfield area.

Actually I waited to post this Night at Fenway story because it seemed inappropriate to post about such a fun night when so many out in the Springfield area were dealing with utter devastation.  My prayers are with them as they rebuild and pick up the pieces of their lives. 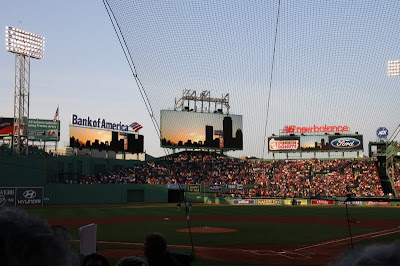 This was the vantage point from our seats.  Sweet! That's the Green Monster to the left. It is
a Fenway landmark. 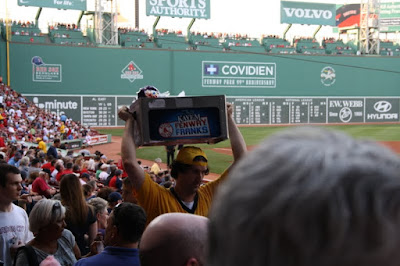 I thought about having a Fenway Frank but I am very particular about my hot dogs.  They simply must be grilled and the bun must also be grilled to a golden brown.  So no hot dogs for me or Jen.  We had chicken tenders and fries. 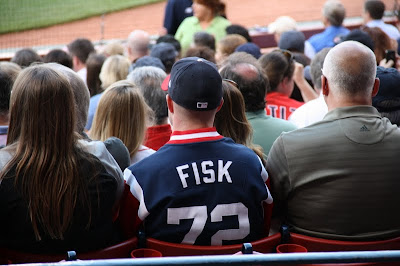 A blast from the past.  A Carleton Fisk shirt, ooh I used to love him! He was actually in attendance at the game. Another bonus! 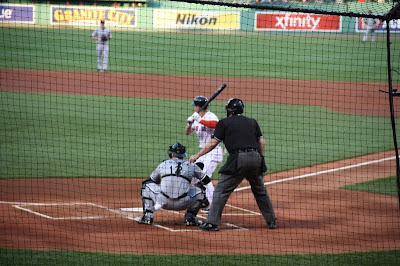 I was so happy I bought a telephoto lens a few weeks ago. It came in very handy at the game.
Our seats were behind the screen.  No one wants to get beaned by a foul ball. Quite a few foul balls did land in the sections on either side of us. That would have been perfect if I got to bring home a game used ball! 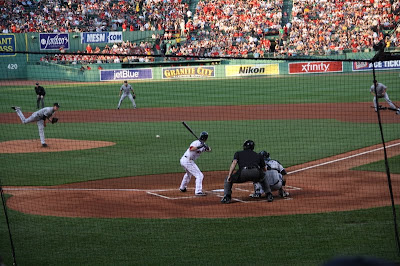 I liked the results from my new lens.  Actually I bought a used one but it's new to me.  I shot a lot of the photos in sports mode which is really cool. I caught a lot of the runners in mid stride. 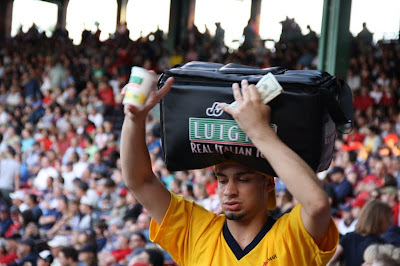 So many vendors were at the game. Beer, coke, lemonade, hot dogs, cotton candy, peanuts, pizza. Name your nutritional poison and you could buy it right from your seat. 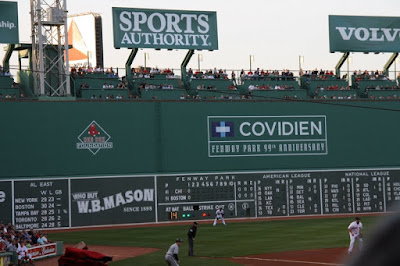 Here's the famed Green Monster. It's in left field and it has taken away many a home run. 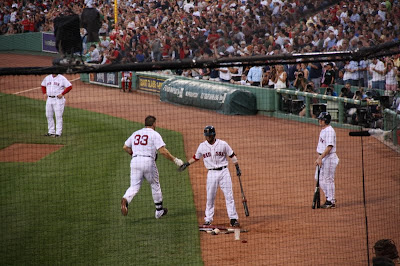 However, our Captain Jason Varitek managed to hit a homer.  Here he is receiving congratulations from his teammate. 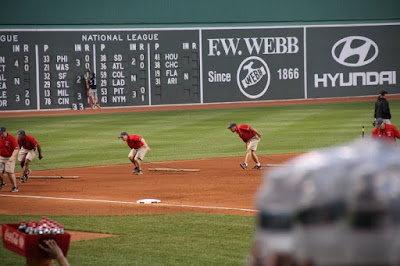 The grounds crew did a fine job on the baselines. Don't mind the water bottles, the nerve of those vendors getting in my shots! 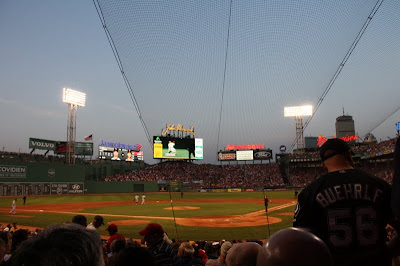 Evening starts to set in. The temperature was still comfortable and I was enjoying all the sights on and off the field. 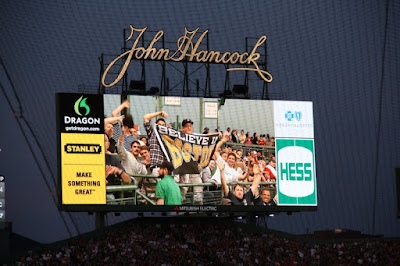 The people who run the jumbotron scan the crowd for interesting faces and things going on at
the park. Some fans paid homage to the Bruins who were playing game one of the Stanley Cup finals the next night. There were lots of Bruins shirts in the crowd.  We are so proud our hockey team is playing for the Championship!  Woo hoo! 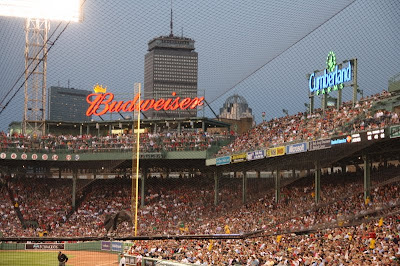 The Prudential Center or as we Bostonians call it, "The Pru", is that tall building in the background. And there is the subliminal message to buy a beer right there for all to see all game long. 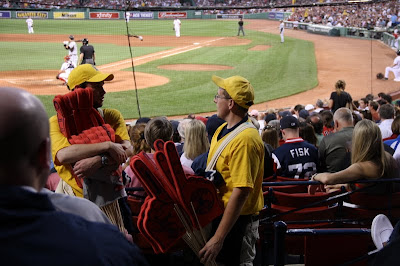 More vendors or as I affectionately call them, "The Finger People", were hawking souvenirs . 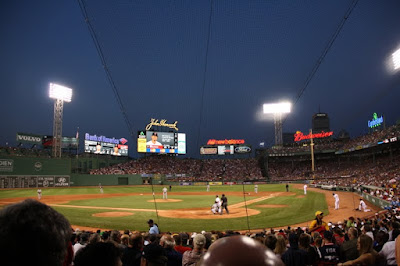 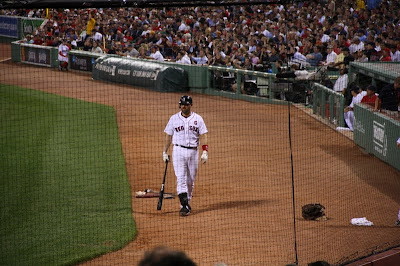 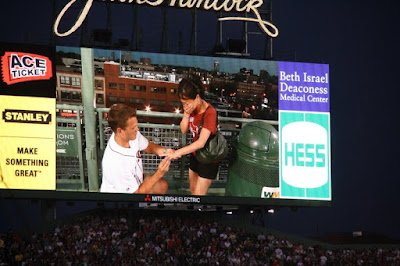 More excitement off field.  Looks like a surprise proposal. Yup, he's on one knee. 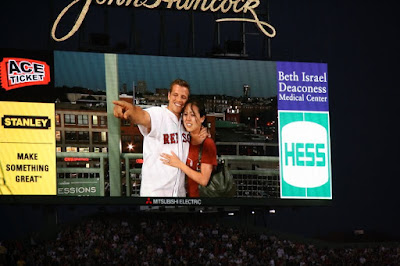 You can enlarge this photo by clicking on it. That looks like quite the rock on her hand! I am glad she said yes. Wouldn't that have been embarrassing? 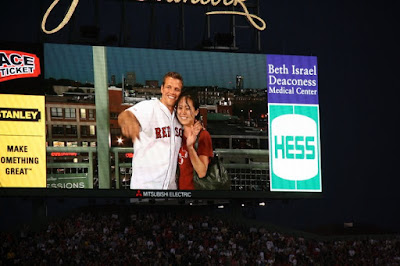 She has her bearings now.  Yes, you are on display for everyone to see! 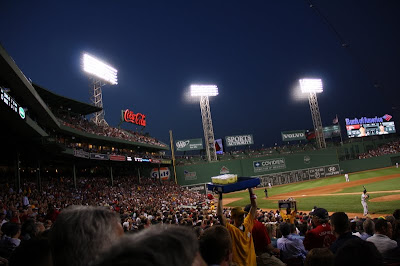 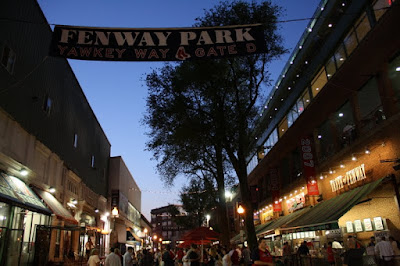 We took advantage of the seventh inning stretch and walked around Yawkey Way where there are shops and food vendors. I just took some photos, no eating or drinking at this point. 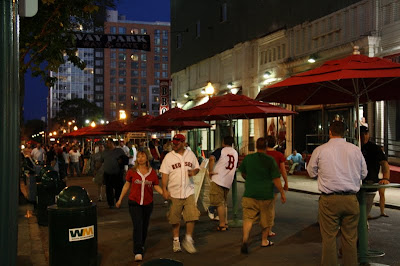 I guess other people had the same idea. There's lots to see around this area. 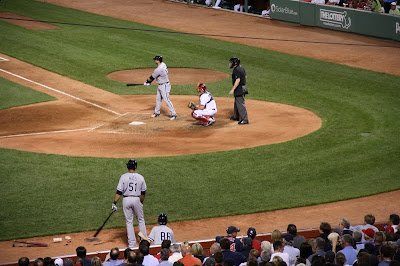 Back to the game but from a different vantage point. I wanted to see all of Fenway Park. 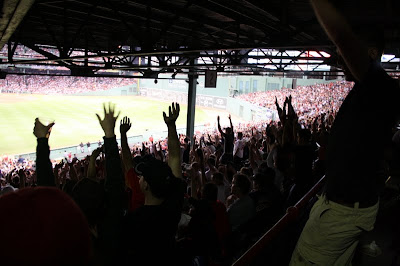 Time for the wave. From this angle, I could really appreciate how many people were at the game. I wish the lighting had been better here.  This was supposed to be my money shot! I was going to lead my post with this shot but here it is way down the end of the post because of it's poor quality. 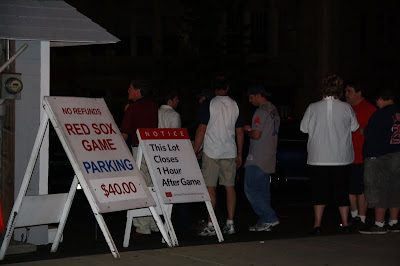 We left the game a bit early to avoid traffic only to find a line to get our car out of the parking lot.
Can you believe the price to park your car?  And then you have to stand in line to get it? Insanity!
All in all a very fun night. I hope to go again in this decade. Thanks to Larry for the tickets and Jen for driving in and accompanying me at the game.  I hope you all enjoyed your vicarious night at Fenway!
Email Post
Labels: baseball Fenway Park Red Sox

Two French Bulldogs said…
Awesome. Mom and her friend were just saying they need to go there one day
Benny & Lily
June 4, 2011 at 11:10 PM

Julie@beingRUBY said…
Hi Elaine
What fun.. I went to my first and only baseball game at the Sydney Olympics.. The stadium was only quarter full but I can imagine what a fun atmosphere it would be somewhere like Fenway Park.. I know of this stadium via movies of course. hehe.. especially that Drew Barrymore movie where her boyfriend is a Red Sox nut!!

Thanks for taking me a along.. looks like it was a blast..

From Beyond My Kitchen Window said…
Oh Elaine, of all the blogs I read and all the wonderful posts people have written, I can honestly say this is my favorite post out of all of them. My beloved Red Sox. Is there anything as exciting as going to a Red Sox game. We have never had seats as good as yours. My three favorite things about being at Fenway are capture by you perfectly. The start of the game,the enthusiastic fans and then when darkness falls over the park and you can see the night sky above and beyond the bright lights. I LOVE FENWAY PARK!!!!! The best post ever. Congratulations. Great photos!!!!
June 5, 2011 at 6:51 AM

Anonymous said…
Good for you for getting the lens! Makes such a difference in having a bit of photography fun and capturing the really good shots! Love these photos!!

What a fun post! I haven't been to a Sox game in YEARS!!! I think the last time I went we sat behind home plate! I've sat everywhere, left field, right field, bleacher creatures! So much fun and fond memories. I like my hot dogs grilled too!

What a nice gift! How wonderful to see an engagement too! I probably would have cried!

Castles Crowns and Cottages said…
Elaine! Yes, I remember now, you live in BOSTON! Oh how my time there was precious. My husband and I would walk from the Back Bay to the North End, eat a great Italian meal and then walk AGAIN to the Back Bay....THANK YOU for visiting my Provence post....yes, it is a dream land and it is o fragrant there...you must go there for a REAL vacation. ENJOY! Anita
June 6, 2011 at 5:29 AM

French Kissed said…
Lucky you! Once in a while I get the chance to see a Dodger game and I think I love the whole experience more that the actual game. Such a fun night out for you. By the way, I am loving your new header with the gorgeous wisteria.

Vicki Boster said…
Well - you certainmly did have a great time! How lucky for you!! I love the kitties on your bog - they are precious. We love our kitties at our house too.

Your blog header is fabulous!

Rebecca said…
Great pictures Elaine!! You had a beautiful night. And THANK YOU for the photos of the Captain! ;)
*sighs and fans herself*

PS: I love the wisteria on your site. Years ago, G and I owned a house in Saugus, and it had a beautiful archway with wisteria braided throughout. I loved, loved, loved when it bloomed. So beautiful.
June 8, 2011 at 9:23 PM