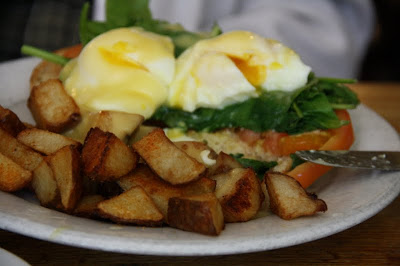 Well how can that be? It's my birthday again! Wow did the last year fly by!
Time to do some celebrating. First of all,  I took a vacation day from work so I would have the entire day to play and do whatever I wanted.  My Sister had the day off too because her last day of school was last Friday.
I told her I wanted to go for dinner in Rockport.  I wanted to see a beautiful Rockport sunset. But then the Bruins made it to the Stanley Cup finals and wouldn't you know it game seven was scheduled for the night of my birthday. So we decided to go for breakfast in Gloucester instead so I could watch the game at night.
I picked the place for breakfast, Sugar Magnolias.  This was my second trip there. I had the goatie, an omelette filled with goat cheese, tomatoes, and mushrooms and maybe spinach.  Can't remember but I know it was delicious.  My sister opted for the eggs benedict with spinach. 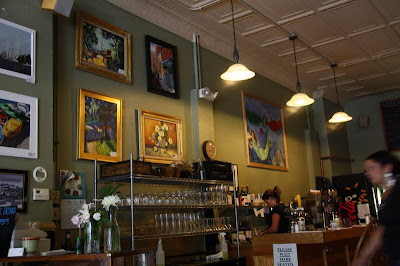 The decor is nice and easy.  Nothing fancy but welcoming. We got there at a good time for a late breakfast. 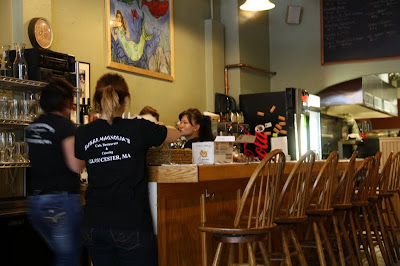 As I was sitting there watching the waitresses fill the ketchup bottles and write the lunch offerings on the menu, I was reminded of the movie Mystic Pizza. Maybe it was because the girls all seemed to be friends or maybe it was the setting in a seaside town in New England. I did not see Julia Roberts. 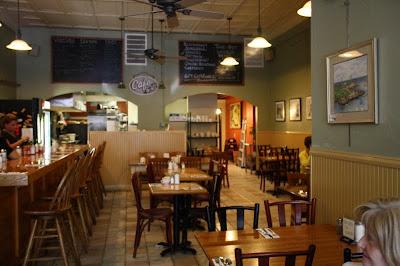 Here's another view of Sugar Magnolias or Sugar Mags for short. 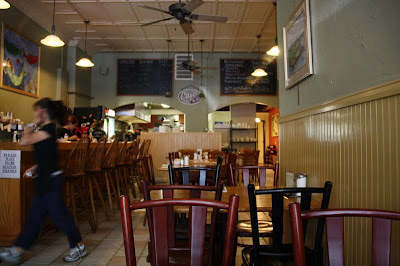 There's Becky our waitress. Turns out she's originally from Winchester the next town to mine! She had some funny stories for us. 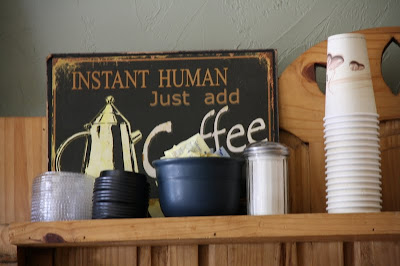 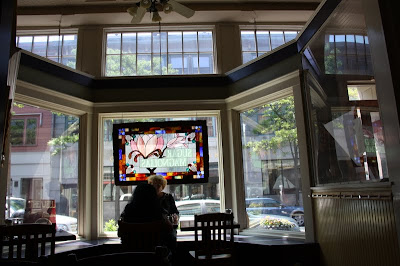 Here's the front of the restaurant with a beautiful stained glass window. 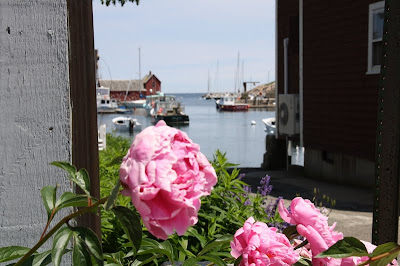 After breakfast we drove along the coast to Rockport. The peonies were in bloom and so fragrant. We've had so much rain it's been good for the flowers. 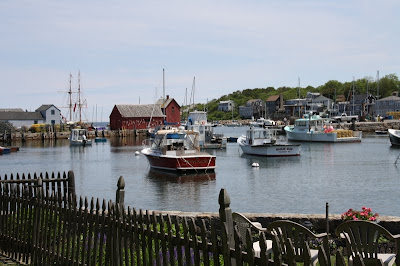 For the last few days the weather has been more like April than June.  It's been cold and windy. But today it was absolute perfection! Sunny and in the 70's, can't get much better than that. I guess the birthday gods must have been looking down on me. Wouldn't you love to have an oceanside seat in one of those little chairs at the bottom right of the photo? 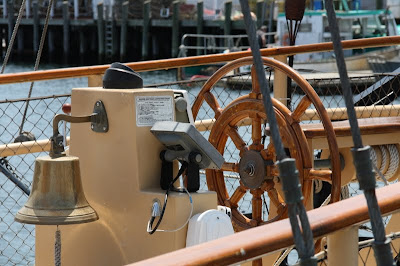 We walked to the end of the wharf and found this beauty of a boat or I should say ship. 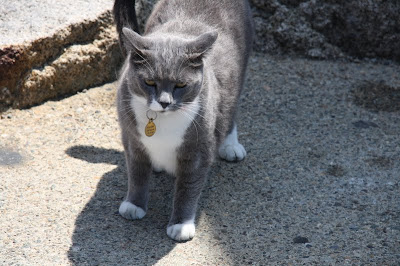 And don't I always run into a kitty no matter where I go?  This one was really friendly and definitely not a stray. 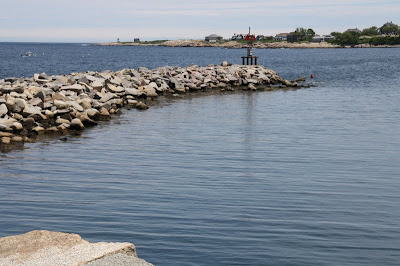 Of course we had to sit on the rocks since we were in Rockport.  Just look at that water.  This is the
place to relax. 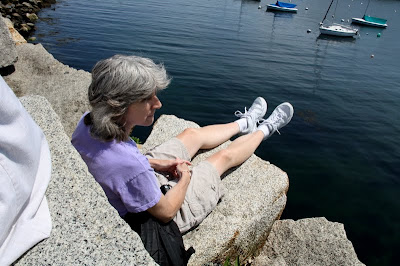 This woman told us this rock is the best seat in the house! She called it a Rockport Lazyboy. 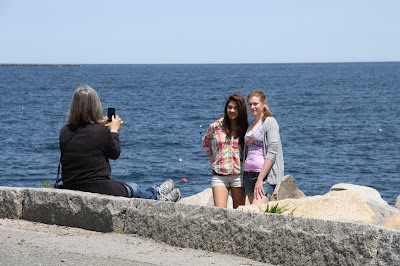 This spot at Bearskin Neck is popular fror picture taking. Is this going to be a Christmas card? 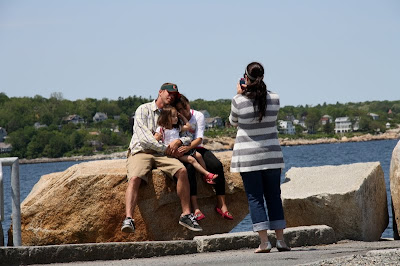 This is surely a Christmas card. Mom just needs to get someone to take one with her in it too. 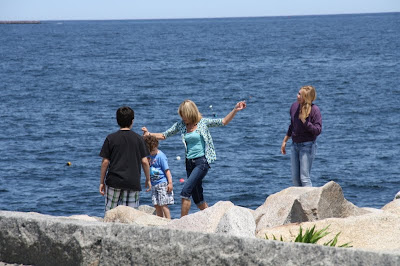 Walking all the way out to the end of the jetty is a favorite pasttime. Some can do it with grace. Others can not. 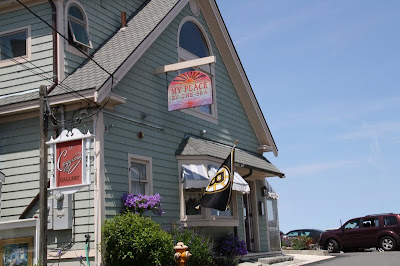 Don't forget, there's a game seven to be played tonight. Bruins fever was alive and well in Rockport. 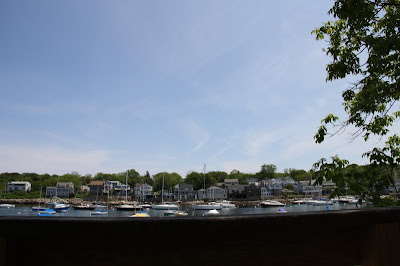 After soaking up some gorgeous sunlight, we headed to the deck at Helmut's Strudel Shop
for a bit of refreshment.  Ice coffee for me and tea for my sister and of course a warm from the oven slice of apple strudel.  It was beyond delicious! 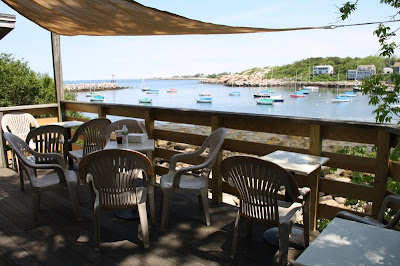 So here is my happy place, the deck at Helmut's. I could sit here all day sipping my ice coffee and watching the seagulls fly by. I love the feeling of a soft breeze on my face and listening to the boats rock to and fro right in front of me. Nirvana! 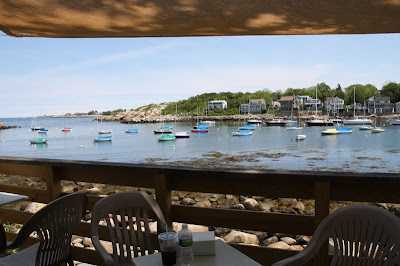 Oh I do not want to leave this idyllic spot but I do want to get back and see my mom at the nursing home. I have to see her on my Birthday. And then there's the game tonight. 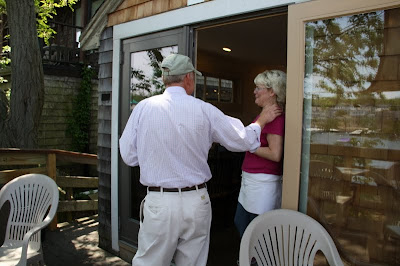 This man came to Helmut's on a break from work. What a nice respite from the work day! He is lucky to work in Rockport.

And the woman with him is Christine.  She works at Helmut's and she is hysterical.  She was going to make a Stanley Cup out of tin foil for the Bruins game. And last night, she stayed up until 2 AM making a Bruins sign to be hung on Rockport's most famous building, the Motif No 1. 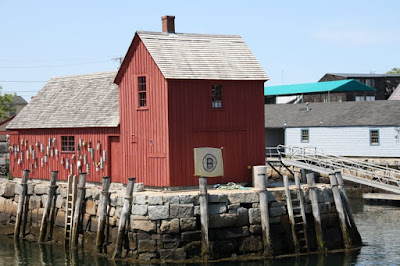 And there it is, Christine's handiwork. It looks very professional. 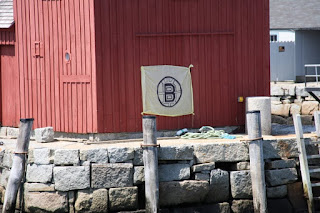 And a closeup.  You know my best birthday present would be a Bruins victory tonight.  They're up 3-0 as I write this. 20 minutes to a World Championship! Cool.
Email Post
Labels: Birthdays Gloucester Rockport

Ocean Breezes and Country Sneezes said…
Isn't it nice that the Bruins won after 39 years on your 39th birthday!

Love all the photos, it looks like you had a fantastic time! Cute kitty too!

Lynn said…
What a perfect birthday! I have to tell you how much I enjoy your blog. I live in Ohio, but grew up in Massachusetts and love to keep in touch with the area through your writings. Thank you!
June 16, 2011 at 3:42 PM

Sarah @ Modern Country Style said…
Oh, Happy, happy birthday, lovely girlie. That looks like a WONDERFUL day. I hope your next year holds so much happiness that you can barely contain it all.

Anonymous said…
Well, now I know what Whisper is doing during the day! That photo of the grey kitty looks EXACTLY like her, including the white stripe on her cheek. It's so great that you are taking care of Miss Marble. You and your sister are good souls.
June 18, 2011 at 10:56 AM

From Beyond My Kitchen Window said…
Happy Birthday Elaine and what a gift the Bruins gave you too. I love Rockport and look forward to visiting again.
June 19, 2011 at 7:42 AM