A visitation in Melrose? 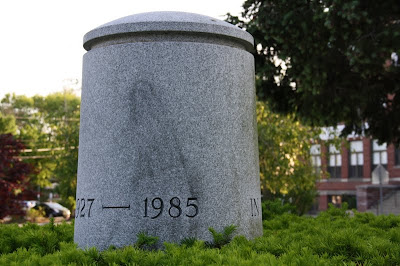 I don't normally talk about religion on my blog.  But today, on Memorial Day, I am going to make an exception because of something I saw this weekend.  By the way, I should mention I am a Catholic.

On Sunday, my sister said she had someplace to take me.  She had heard about the appearance of the Virgin Mary at a park in Melrose.  Supposedly, there was an image of Mary on a stone monument. My sister wasn't sure when it first appeared but it has been at least a couple of months.  We checked the internet and saw nothing about it. We decided to visit the park and see for ourselves.

The monument honors Mary Foley of Melrose, a school crossing guard who was killed in a tragic accident in 1985.  The day of the accident she was on duty. She shielded the children who were crossing the street with her own body as a car headed towards them.  She was hit by the car and killed.  She was a true hero. The park is across the street from St Mary's School and it is a peaceful place with benches and trees and irises on it's borders.  I started to take a few photos and then my sister decided to take her camera out of her purse. As she took the camera out we heard a clink. We looked down at the stone bench of the monument. My sister's medal of the Virgin Mary had fallen out of her wallet and onto the monument! We looked at each other and thought that it was another sign.  You can decide for yourself. 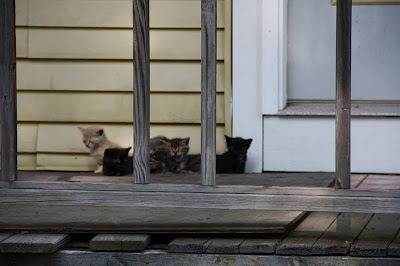 On Monday, my sister had gone to her studio. As she approached the back door she saw these tiny kittens coming up through some holes in the floor boards.  She said one by one they climbed through a hole and she thinks she counted nine!  She called me to come take a look.

When I got there I only saw 5.  I am not sure if they all are that healthy. It's hard to tell and they retreat  under the floor boards if you get too close.  We have not seen Mommy yet.
They will need to be rescued soon.  It's a busy street and we don't want them wandering. 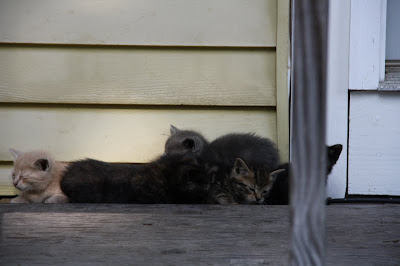 They sure are cute but I am definitely not taking them. Three is plenty!

As you can see, I had a full weekend filled with thoughts of pride for our veterans and troops now serving our country, the appearance in a park that honors a local hero, and bearing witness to new life.

And how was your weekend?
Email Post
Labels: Melrose Virgin Mary

Rory Grant said…
I enjoyed that - it's not what I would ordinarily read - and yet I enjoyed it. Your writing style holds the reader. Thank you.

From Beyond My Kitchen Window said…
I am Catholic also Elaine and I do believe in divine interventions. Isn't that what we believe having faith is all about?
May 31, 2011 at 6:28 AM

Love the image of the Blessed Mother, I think a visitation was entirely possible. I can imagine the look on your faces when the medal fell out!

The kittens are adorable, not just one???

Sarah @ Modern Country Style said…
I don't often talk about my Christian faith on my blog either....but I really enjoyed reading about your thoughts today. It feels as though I'm getting to know you better!

Rebecca said…
Is that the house that had all those animals confiscated from last weekend? I'd heard something about it...I wonder if that was it.
June 8, 2011 at 9:27 PM