Talking about a Revolution(ary) Event 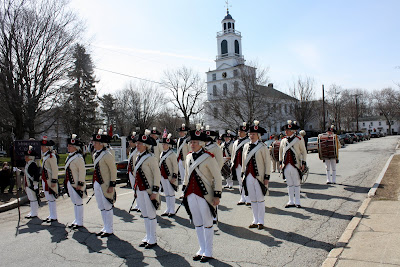 A sunshine filled Saturday morning and the first warm temps in a while coupled with a historic reenactment. I am in my element! 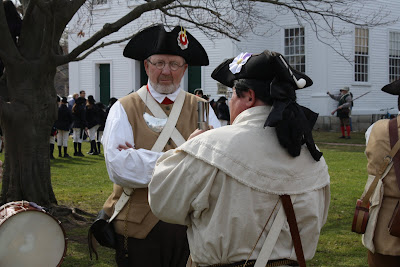 This morning I attended the Bedford Polecapping Ceremony and Colonial Parade. All of the parade units assembled on the lawn of a historic church. The groups had time to socialize before the event. 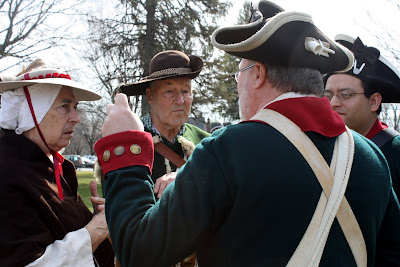 It was a photographer's dream. There was opportunity to get in close to the action and take candids of everyone in their period costumes. 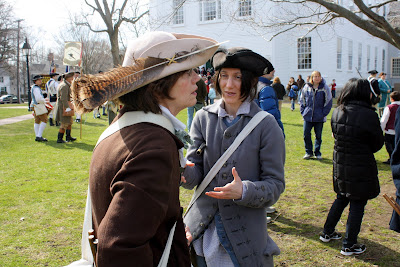 Love the hat and the jacket. 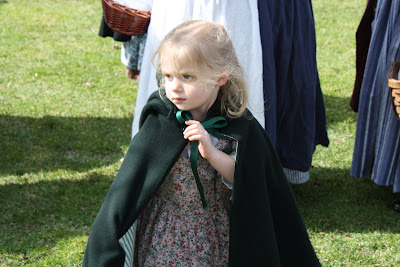 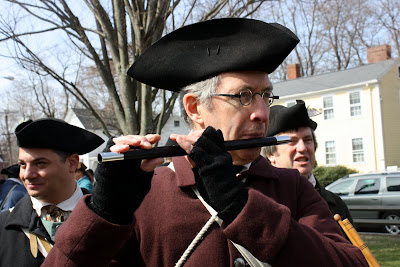 I wish you could hear the beautiful sounds from the day. The fifers and drummers just added to the historic feeling of the event. 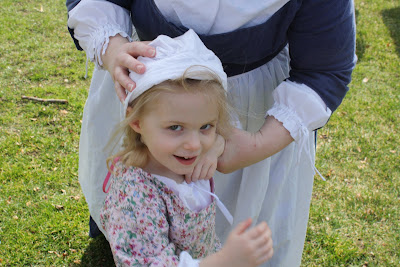 One last bonnet check before showtime! 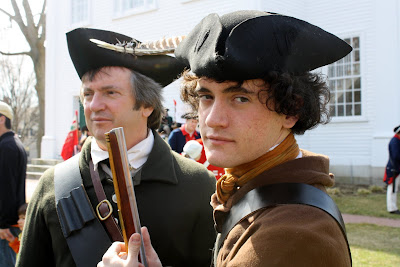 Oops, I got caught snapping this photo. 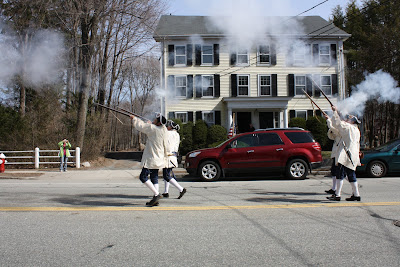 It's not easy to capture the moment a musket fires! I sure wish that car didn't park there. 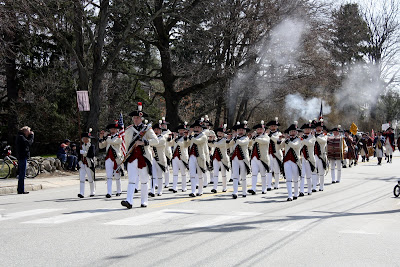 Smoke from the muskets hung in the air. 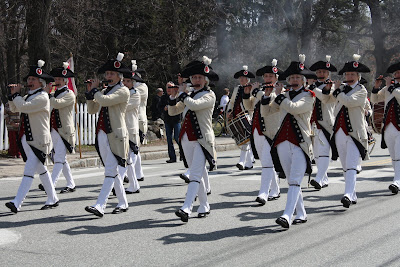 This unit is always in step. 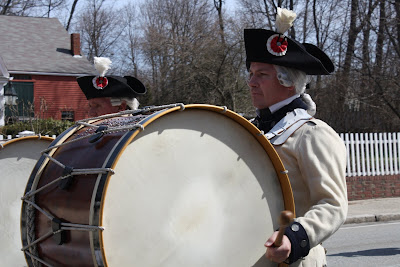 The sound of the drum went right through me. 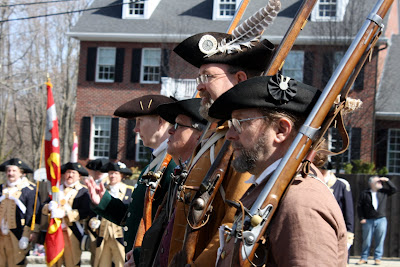 A tricornerd hat was the fashion must have of the day. 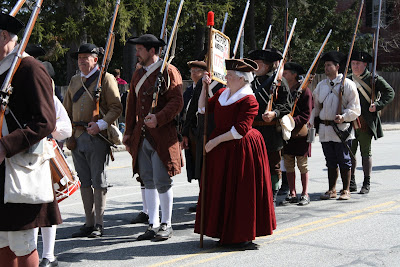 Women played a role in the day's activities too. 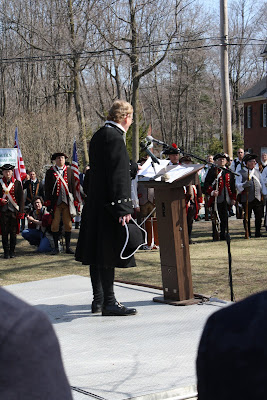 During the invocation, the reverend mentioned that today's event would be romantic and joyous but the real events were messy, violent, and painful. 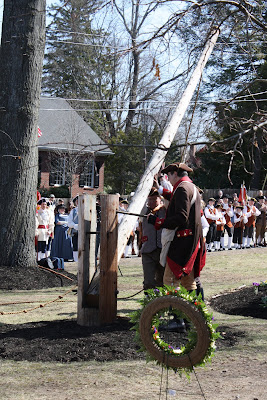 The pole is readied for the ceremony. 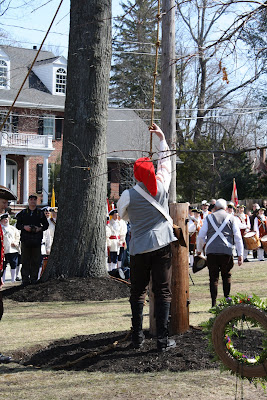 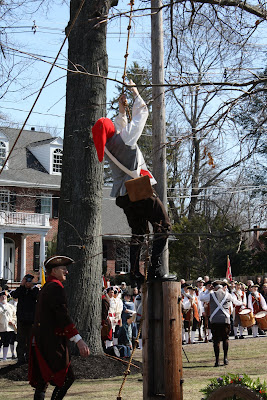 He begins his ascent. 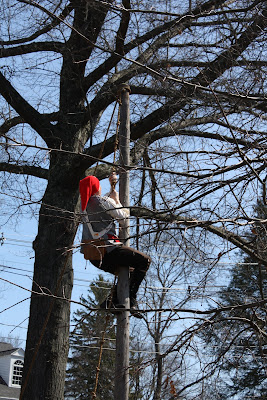 He must climb quickly. 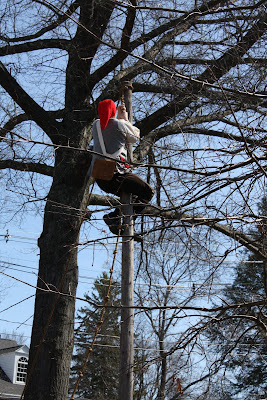 One must be strong and agile. 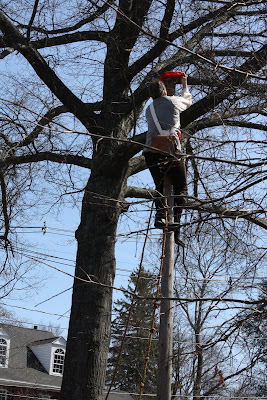 The cap is placed atop the pole. 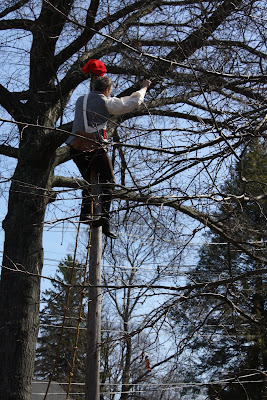 A quick fist pump to his audience. 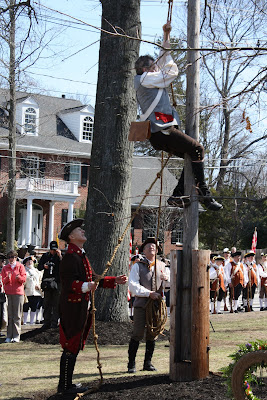 He moves quickly down the pole.... 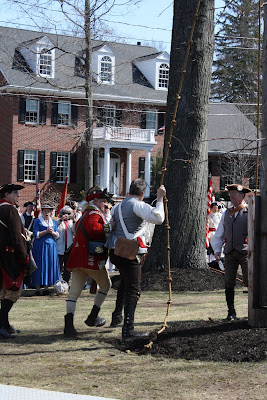 Only to be met by the Brits who did not appreciate his act of defiance. The audience boos the Brits. 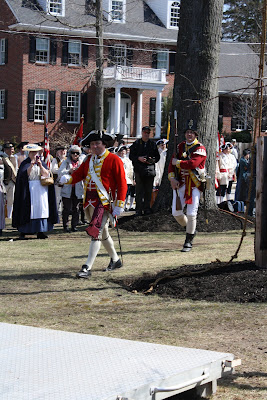 What's this? A British VIP who proceeds to roast the local officials and the crowd. 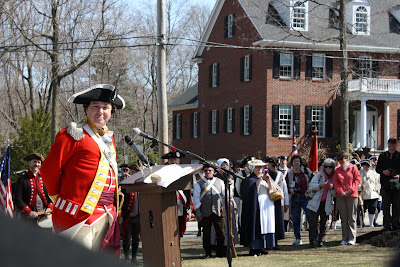 He was very entertaining and of course he had to mention the narrowly avoided government shutdown which nearly shut down some of the day's historic events at the national parks. Wouldn't that have been ironic?
Email Post
Labels: Bedford Polecapping

Ocean Breezes and Country Sneezes said…
Oh gee, I wish I knew about this, my husband, who teaches American Government would have love this and Bedford is only down the road from us! Looks like it was a great time!
April 9, 2011 at 11:20 PM

Erin | Bygone Living said…
What a great reenactment, and such lovely homes in the background.
Did you know that I'm a Revolutionary War reenactor? Fun fact! :)
April 10, 2011 at 12:47 PM

Blondie's Journal said…
Neat, neat, neat! My husband is such a history buff, he would have just loved this! Your photos are great and I really love the costumes!

Is your weather perking up yet? We are at 83 today! Thank goodness for the breeze!

From Beyond My Kitchen Window said…
I love reading about The American Revolution. We are so lucky to live in Massachusetts were it all began. Love visiting the Old North Bridge too. This reenactment looked awesome.
April 10, 2011 at 8:29 PM

Anonymous said…
Amazing shots. It's hard to believe this was once reality and there are people who keep it alive every year and celebrate and recreate it.
April 11, 2011 at 11:27 AM

Donna said…
Beautiful photos! I enlarged most of them to really see the details (you have an amazing camera!).

Valerie@chateaualamode.typepad.com said…
I love that there are people out there recreating our history. How exciting for you to be a part of the festivities.
April 13, 2011 at 1:24 PM