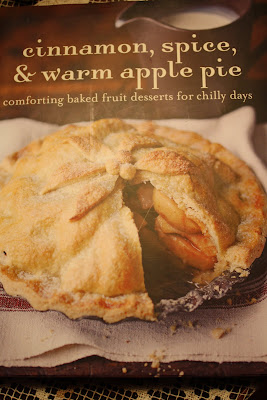 For Christmas, I bought a friend a new cookbook and an oven mitt from Anthropologie. As I thumbed through the cookbook the day I bought it, I thought I might like one for myself but I decided against buying one. At that time, my dollars needed to be spent on Christmas gifts for others.

Well, the other day I was at Barnes and Noble and I looked for the cookbook and found it. I had a members card so I saved a bit on it.

Mmm, "cinnamon, spice, & warm apple pie- comforting baked fruit desserts for chilly days", the very title makes me salivate. I couldn't wait to get started on my first dessert. I went to Whole Foods on my way home from Barnes & Noble. I sat in my car in the Whole Foods parking lot and looked through the recipes. I decided to start with the first recipe, apple and blackberry crumble. I just love blackberries! 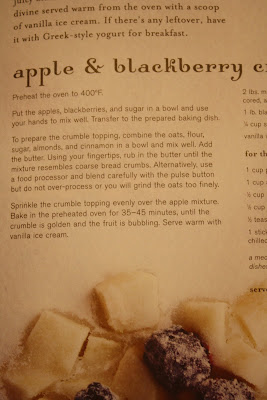 Although I consider myself better at baking than cooking, I am certainly no expert. In fact my repertoire is pretty much limited to apple crisp, lemon squares, and brownies.

The recipe called for porridge oats and I couldn't find them at Whole Foods so I used what I had on hand, the regular rolled Quaker Oats. Later, one of my friends told me I should have used steel cut oats. Ok, good to know for next time. 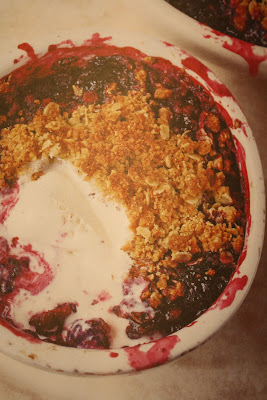 I was hoping my apple and blackberry crumble would turn out just as nice as the one pictured in the book. 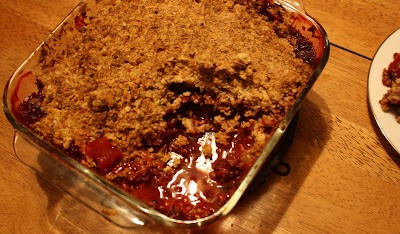 Here is MY apple and blackberry crumble. The recipe called for a variety of mixed apples so I used braeburn, granny smith, and one lady pink gala apple.

I thought it turned out well so I invited a few people over for an impromptu dessert. We sat in the living room and enjoyed our dessert and the fireplace. It was a chilly night so a warm apple dessert and a cup of tea was just the ticket! 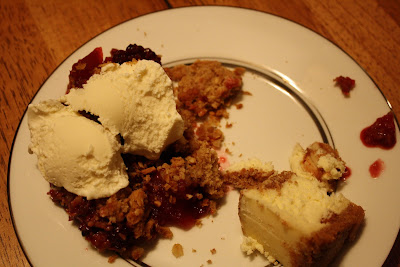 Vanilla ice cream is the perfect topping for this dessert although whipped cream would also be nice!

I've decided to make every recipe in the book and blog about it a la Julie and Julia! Maybe they'll make a movie about me too!
Email Post
Labels: cookbooks dessert

Ocean Breezes and Country Sneezes said…
I love fruit desserts, they are my favorite and yours looks delicious! Impromptu can be lots of fun sometimes! Looking forward to seeing your many recipes!

Oh, will there be a special screening for your blog friends when the movie comes out?
March 9, 2011 at 2:08 AM

Blondie's Journal said…
What a nice way to entertain friends on a cold night! I think your crumble looks delicious...it all falls apart anyway! lol!

If you decide to bake through the whole book, your amount of friends may increase!

A New England Life said…
Wait, is that a slice of cheesecake in the final photo? I do believe it is! Why can't I be one of your friends? ; )

What a great idea to cook through the whole book! And you got me thinking about going to Whole Foods. I don't believe I've ever been but I hear it's a fantastic store. There's one in Andover, not to far from me, so maybe my husband and I will go together and check it out.
March 9, 2011 at 7:22 AM

Elaine said…
@Ocean Breezes and Country Sneezes-
yes of course my blogging friends will be invited to the movie premiere.

@Blondie's Journal- I can always use more friends!

Elaine said…
@Benny and Lily- I suspected you guys had good noses!

@Sea Angels- Like that word scrummy. And yes it smelled so good in the condo I wanted to dive in to the dessert before the company arrived!
March 11, 2011 at 1:33 AM