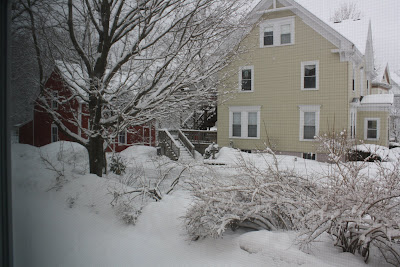 Good grief, it snowed again! This caught me off guard because I think it was forecast as a dusting. It was more than a dusting. 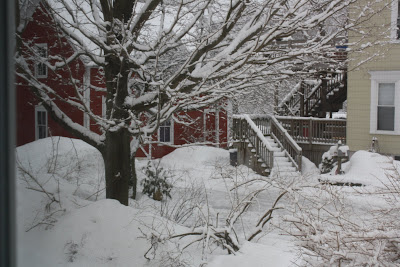 But it sure was pretty as it always is. I slept in a little later than usual. 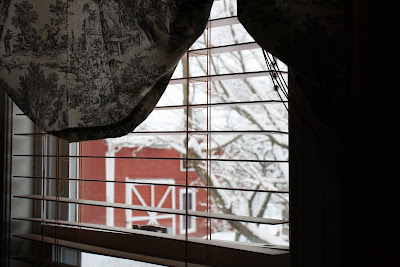 The view was so nice from my kitchen window. 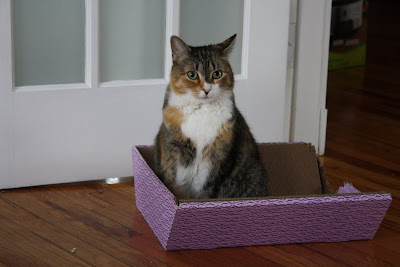 Molly wanted to sit in the new scratching post box and if you look at the side of it she took a few bites out of it too. And then she spit out the pieces on the floor, ew! Bad kitty! 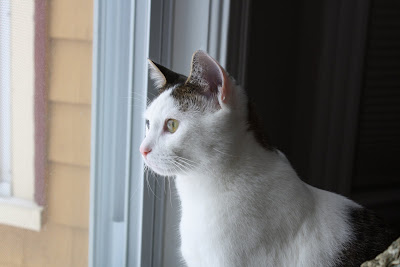 Percy loves watching the snow fall and then it turned to rain. He enjoyed watching the raindrops slide down the window and he tried to catch them. 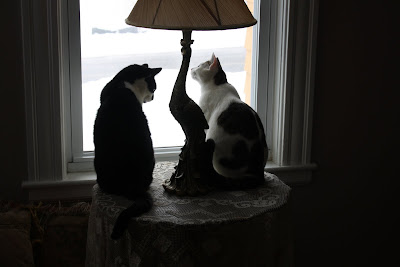 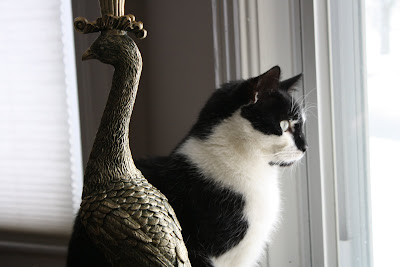 And then he edged Percy off the table. 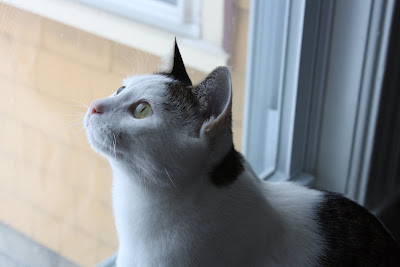 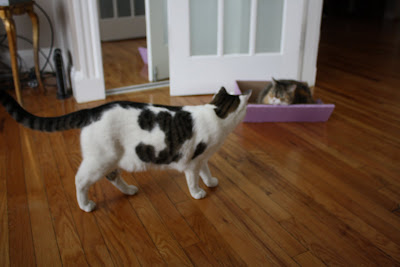 Percy is a little instigator. 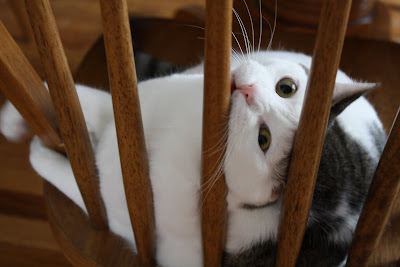 And he can be quite destructive too. So far, he has ripped two of the three fabric shades in the living room, made scratch marks on the new fireplace, broke a teacup and two mercury glass candleholders, and pulled 6 nailheads out of my dining room chairs. He pulled the nails out with his teeth and then dropped them to the floor so he could play with them. I, of course, freaked out, thinking he could swallow a nail and do serious damage. He is a danger to himself and others. I had to take the chairs out of the dining room and put them in the basement office so he could not get at them.

Two French Bulldogs said…
Oh you guys look comfy and warm inside.There is way to much snow out there.
Benny & Lily
February 28, 2011 at 11:29 PM

Elaine said…
@Deb Yes I am done with Winter also.

Carol @ There's Always Thyme to Cook said…
Such pretty kitties! They look like they're having fun on the inside looking out :)
Great captures!
March 1, 2011 at 8:37 PM

Confessions of a Plate Addict said…
Beautiufl snow pics! And your fur babies are just gorgeous! Each of mine, except for my CEO Ozzie, has one favorite thing to destroy! It does add up! Yikes! Happy week!...hugs...Debbie
March 2, 2011 at 8:10 AM

A New England Life said…
It certainly was an unexpected snow! We were supposed to have 2-4". Instead we had about 6"! I was quite beautiful, and I did get some great photos. Still, enough already.

Percy sounds a lot like Phineas, who is still a bit of a handful. We've had our fabric headboard covered with a sheet since Phin was a kitten. For some reason he likes to use it as a scratching post! But they sure do make you laugh : )
March 2, 2011 at 10:08 PM