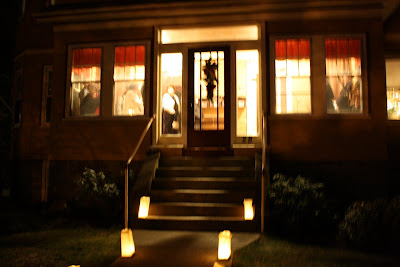 I had my second annual Christmas Soiree on Saturday night. Just like last year, my friend Don and I lit luminarias to line the walkway. You couldn't miss the house with all that candlelight. I was a little concerned as the forecast was for a blustery night but it worked out just fine.

We placed kitty litter in cream colored paper bags then we lit white votives in glass cups and nestled them into the kitty litter. The luminarias lasted from 6:00 to midnight. 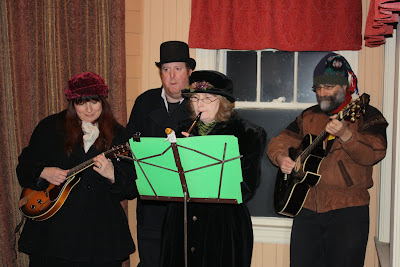 I wanted to do something different this year so I decided to have carolers sing for a half hour at the beginning of the party. My sister's group, Katfish 4 agreed to sing. They have a "real" gig next week in Andover. 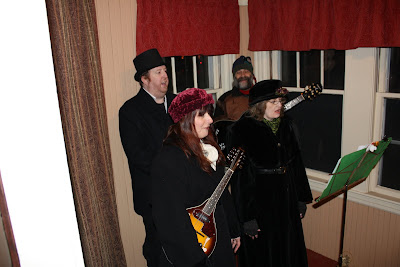 I told them I wanted carolers in Victorian dress. They were nice enough to accomodate me. They sounded great and they played a variety of instruments too. The mandolin, guitar, and penny whistle to name a few. 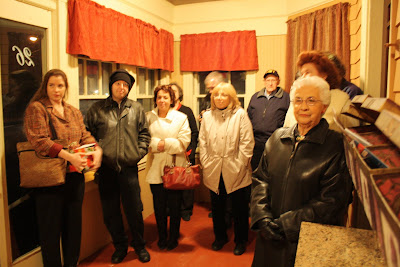 The early party goers got a chance to hear the concert. 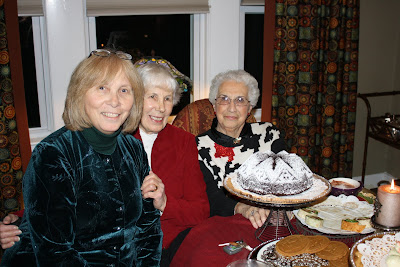 Two women at the right of the photo are like second monthers to me. Clara on the far right is the woman who has my sister and I over for Thanksgiving dinner. Ellie, second from the right, is the woman who invites us for Christmas dinner. My dad goes to have dinner with my mom at the nursing home for the holidays. The woman on the far left is my very good friend Debbi and in case you didn't notice Debbi is Ellie's daughter. 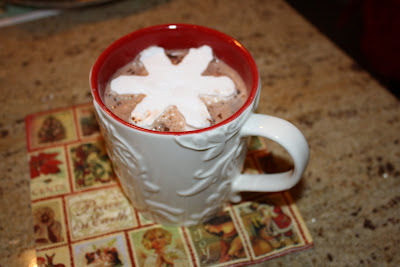 My friend Mary, Clara's daughter, made all the desserts for the party. Mary also made these marshallows in snowflake shapes. I saw the snowflake recipe in an old Martha Stewart magazine and I asked Mary if she could make them for my party. We had them last year and they were a big hit so I wanted them for this year's party too. 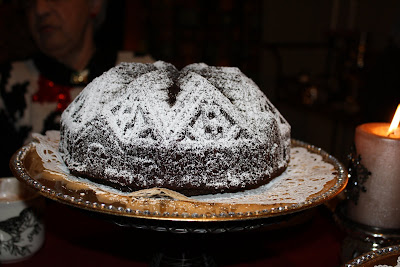 Last year Mary made her famous Midnight Velvet cake for the party. She made it in the shape of Hansel and Gretel's cottage. It was so beautiful, no one wanted me to ruin it by cutting it. So this year I thought a tudor style house might be a little bit less of a wow factor and perhaps my guests would actually eat the cake this year.

It still had a wow factor with the dusting of powdered sugar accenting all the nooks and crannies of the cake but the guests actually ate the cake this year. It smelled as good as it tasted. 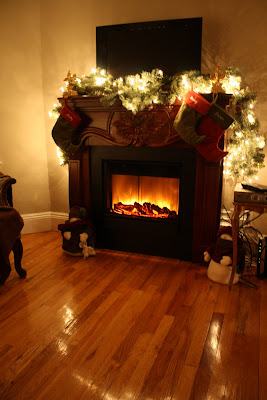 The fireplace was turned on for the evening. It gave off a lovely glow and the room had the cozy look I was hoping for. I had hoped to have the TV wall mounted before the party so I could decorate the mantel but time ran short. I ended up just throwing lighted garland and the cats' Christmas stockings on it. 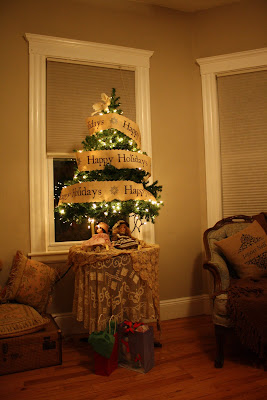 Ok, this tree is definitely not my finest work but I had issues this year. I was worried that Percy, my kitten, would knock the ornaments off the tree. So I used my old prelit tabletop tree and I got the Happy Holidays banner from Pottery Barn. It served my needs.

As for the kitties, Percy climbed right up the middle of the tree within 5 minutes of me putting it on the table. I wished I had my camera with me at the time. He actually got stuck in the tree. He stood on his hind legs and he draped his front paws over one of the branches. I am sure I looked hilarious trying to first coax him then drag him out of the tree. See why I did not add ornaments this year?

Then yesterday, Oscar, my middle kitty, jumped on the table and laid under the tree. He got his claw caught in the lace tree skirt and proceeded to tug on the skirt. I had just entered the room and tried to get to him before he toppled the tree. I still can't believe what happened next. Oscar gave the tree skirt a good tug and both he and the tree skirt landed on the floor and the tree did not fall! I think Oscar must have been a magician in one of his previous nine lives! 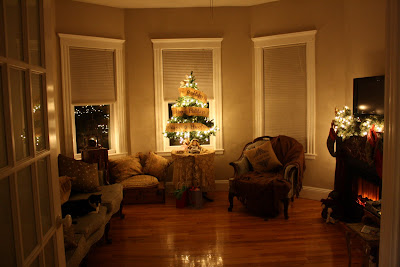 Here's a wider view of the living room. 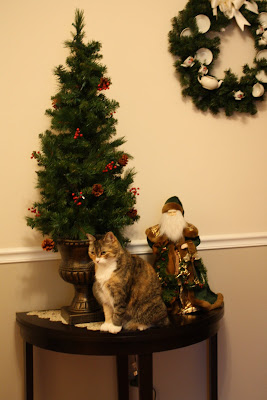 This shot was taken this morning. Molly blends in with the tree and Santa. She is happy it is quiet and she can have the run of the condo again.

I hope to have more photos of the evening soon. I was too busy to take photos last night.

This post is part of the Christmas with Victoria party. Click on the badge on my sidebar to see other partipant's posts.
Email Post
Labels: Christmas Soiree

Kathy said…
What a festive time! Love the luminary walk and your carolers! A special touch. I am in awe at your cat! I was waiting to hear you tell that the tree toppled - amazing! Love the banner - you did a terrific job on your mantle and the wreath with teacups etc...charming. Thank you for joining me this week at Christmas with Victoria, you made it all the more special,
Kathy
December 6, 2010 at 9:13 AM

Terri said…
Oh My! Kitty troubles at Christmas! I guess they like redecorating!
Your home looks lovely anyways. What a fun time your party must have been with carolers. I love the star shaped marshmallow!
Hugs,
Terri
December 6, 2010 at 12:55 PM

Yolanda said…
This looks so warm and Christmasy so glad to have found your blog.
December 6, 2010 at 9:51 PM

Rebecca Nelson said…
Oh girly...I love it! I really do! And I LOVE the tree is said isn't your best work!

Thank you for visiting my friend. Merry Christmas to you.

Cindy said…
It sounds like your sorrie was lots of fun! Real live carolers, what a great idea. I love the house cake, it looked good.
Cute story about the cats and the tree, I miss having my cat for that reason, she was always getting into mischief!
Hugs, Cindy
December 7, 2010 at 11:58 AM

Sherry said…
I enjoyed my visit with you today. Your living rooms is so cozy and inviting. Everything about your soiree sounds wonderful. I will have to try luminaries to light the way to our home sometime soon. The cake looks soooo yummy.
December 9, 2010 at 3:26 PM

From Beyond My Kitchen Window said…
How lovely everything looks. The marshmallow snowflake is so original and very festive. I can only guess the chuckles you must have watching those kittens tear around the house and hopefully keeping your decorations from smashing. The fireplace looks stunning in white lights. You really know how to throw a party.
December 9, 2010 at 9:54 PM

Fete et Fleur said…
I'm late to see your Christmas revelry. It looks like you had a wonderful time. Your fireplace really makes the room beautiful. It was the perfect choice.

Blondie's Journal said…
You really thought of and had a lot of great details for your party! I love everything from the carolers to the marshmallows and cake!! Your fireplace and tree look fantastic! You are too hard on yourself!

Jan's camera said…
You have a beautiful home. The cats are too funny. My cat doesn't care about my tree at all. Except for the water. He tries to drink the water but I keep it covered up. The marshmallows are very cool and that cake is so beautiful.
December 16, 2010 at 3:45 PM