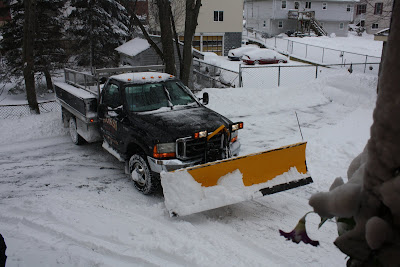 As predicted, we got a major snowstorm in the Boston area. I know other parts of the East Coast also got hit. This is the first time I had seen the snowplow in many months. It snowed from Sunday afternoon into Monday and it was officially termed a blizzard.

Did you know you can't call just any snowstorm a blizzard? You must have the following components: snow, visibility of less than 1/4 mile, wind gusts of over 35 mph,and it has to last more than 3 hours. We had all of that and it lasted for more than 10 hours. 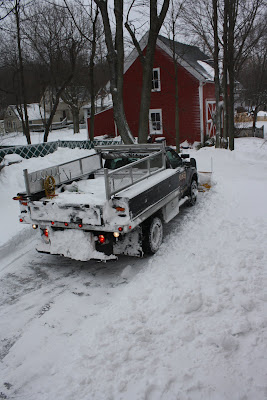 Boston received 18 inches of snow. Some other surrounding towns had as much as 23 inches. I think my town had less than that, maybe 16 inches? At that point, it doesn't really matter. The cleanup is massive. Our snow plow guy made at least 3 trips on Sunday and 2 on Monday to our condo building. 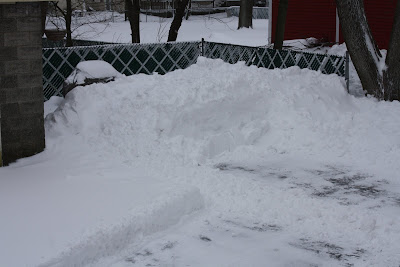 This is the back parking lot and the patio area of the condo. I always hated that fence. It's super ugly. Nevertheless, I do not like to see that much snow on the patio. Good thing we covered the gas grill. 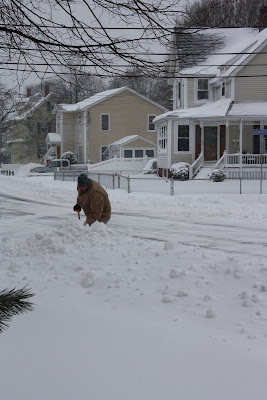 Here's my neighbor, one man against all that snow! We talked and he was actually in good spirits. I just had to do the end of the walk at our building. One of my condo neighbors had done the back stairs and 3/4 of the front walk and he wanted to wait until the plows were done clearing the streets before he finished the job. That's because the plows always push the snow right back from where it was just shoveled. I had to finish the last 1/4 of the walk.. If the snow had not been blowing and the wind chill had not been in the single digits I wouldn't have minded doing the shoveling. There really wasn't that much left to do. 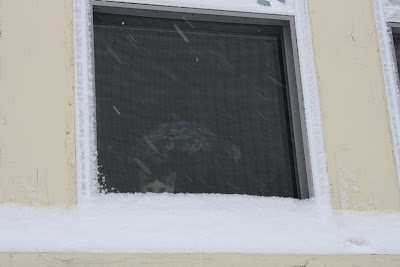 The kitties did not lift a paw to help me either! Percy watched, and I suspect there was a smirk on his face but the snow was too high for me to see! 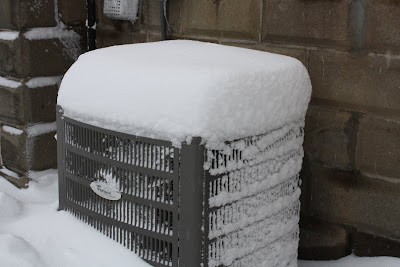 Goodbye air conditioner! I'll use you next... July? 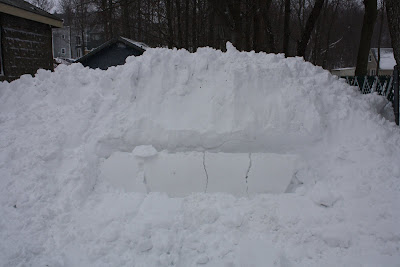 Goodbye patio. I hope to see you soon when the snow melts. I don't think there will be any outdoor grilling for a long time. 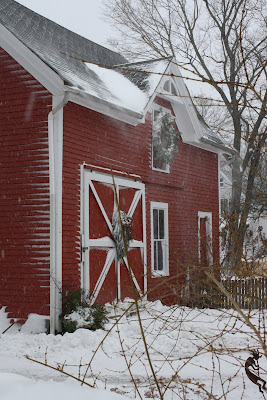 I told my neighbor his barn always looks great in the snow. Little does he know his barn has been featured as my blog header many times! 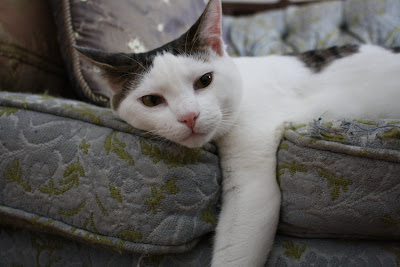 Percy was exhausted from watching me shovel and settled down for a short winter's catnap. 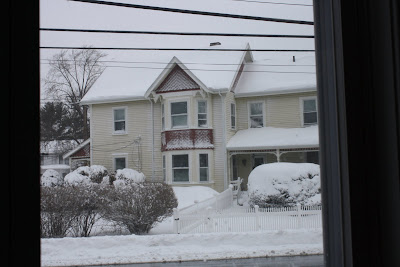 The plan was to walk around to take some better snow shots but it was bone chilling cold. You know, the kind of cold where you are shivering the minute after you go outside. So instead of freezing outside I came in and made myself a hot chocolate and took this shot of the house across the street from the comfort of my condo.

Stay warm and drive safe! I am on vacation this week so hopefully I will have more interesting things to post.
Email Post
Labels: snowstorm

From Beyond My Kitchen Window said…
Wasn't the wind something else. We have a yard full of broken branches. So glad you didn't have to shovel too much. You are absolutely right about the cold wind, it went straight into your bones. Brrrrr!
December 28, 2010 at 12:26 PM

Robin Larkspur said…
I love the picture of Percy looking out the window at you. Cats are such helpful and supportive creatures, arent they? LOL. Stay warm, and be careful with that shoveling.
December 28, 2010 at 1:06 PM

Two French Bulldogs said…
No matter what it sure is beautiful. Percy you must be exhausted from all that shoveling
Benny & Lily
December 28, 2010 at 3:08 PM

Erin | Bygone Living said…
We got hit bad in NY! Over two feet of snow; certainly a blizzard if there ever was one! I enjoyed myself though... nothing more cozy than being snuggled under the covers during a night like that :) ♥
December 28, 2010 at 3:55 PM

Blondie's Journal said…
I'm sorry about the blizzard but I love seeing snow pictures. My hubby bought a new snow blower but it wouldn't start {back to Home Depot it goes}. My kids shoveled, thank goodness.

I love the picture of the kitty looking out the window...what a classic!

I hope you enjoy your vacation. Snuggle up and watch some good movies!

Pamela said…
I'll take some snow lol !!
I love the photo of Percy great shot!!
I love how the snow is falling on your blog and you always come up with great photo headers!!
December 28, 2010 at 7:52 PM

Julie@beingRUBY said…
Hi Elaine
I know it must be a headache.. but it is still lovely for me to see all this snow!! and Percy really knocked himself out helping you.. hahahaha

Salmagundi said…
Here in the foothills of Colorado we are still dry, dry, dry. But, fortunately our mountains are getting hit. Enjoy your week off. Sally
December 28, 2010 at 9:09 PM

Ocean Breezes and Country Sneezes said…
Inside 495 hit the jackpot with snow! Usually we get slammed, but it wasn't too bad, about 6-8 inches! The sustained winds were unbelievable! I don't ever remember winds like that!
December 28, 2010 at 10:32 PM

Sarah @ Modern Country Style said…
How amazing to have so much now. Everyone's talked about how much snow we've had in England but it's nothing compared to this! I can't believe you get so much.

All the children get so excited here when it snows because it doesn't happen every year. I guess where you are it's more just a normal part of winter weather!

I hope you had a marvellous Christmas.

Tracie~MyPetiteMaison said…
All I can say is Percy has the right idea! Stay warm and have a very cozy new year's eve with your friends & family.

Fete et Fleur said…
I'm so glad you are safe. It has been a crazy start to winter.

I want to wish you a very Happy New Year. May it be filled with joy and every good thing.