A Tale of Three Kitties 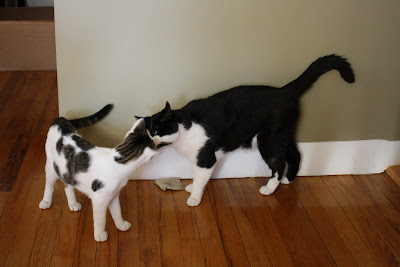 So now there are three kitties in the household. Which creates a state of chaos on most days. Oscar and Percy are getting acquainted. 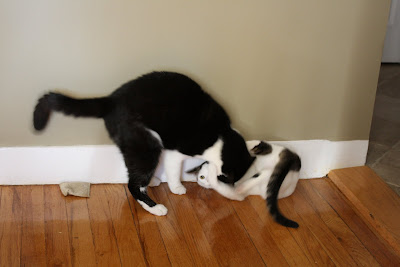 And they like to rough house a lot! I am always afraid Oscar will clock Percy and send him flying. But Percy can give as good as he gets. He's pretty tough. 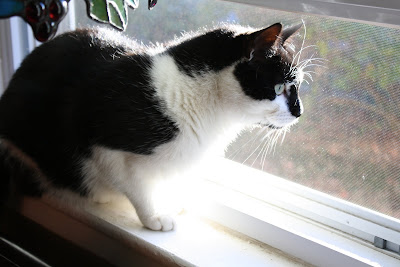 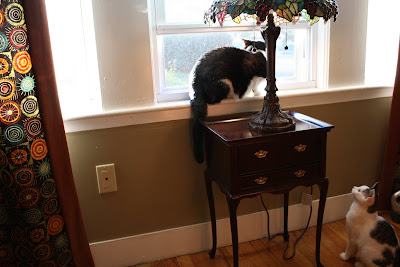 Then Percy realized the window was open! 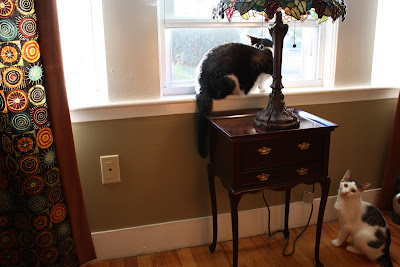 And he looked at me for approval. 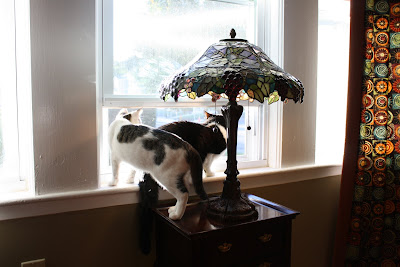 He thinks the window is big enough for the both of them. 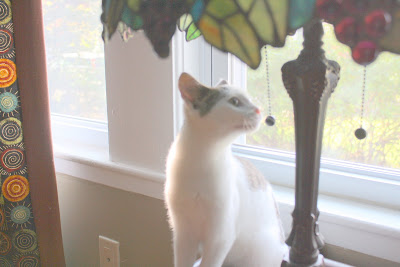 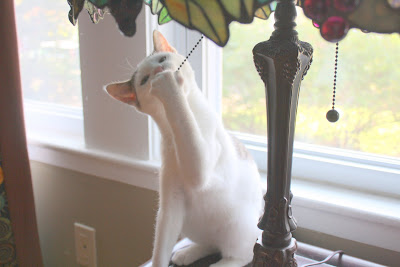 And he tries to eat it. He eats everything in sight! 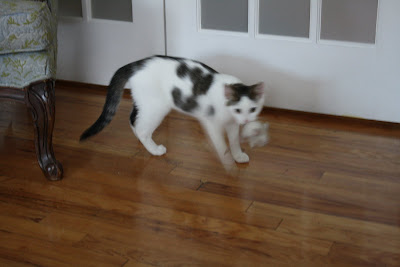 Including his toy mouse. We play fetch with it. 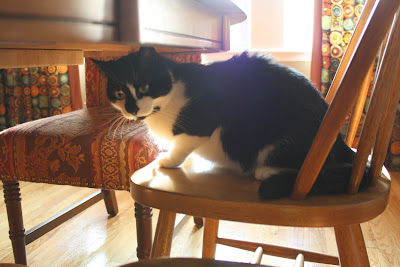 Sometimes Oscar has to hide from Percy. He gets exhausted from Percy's non stop appetite for play. 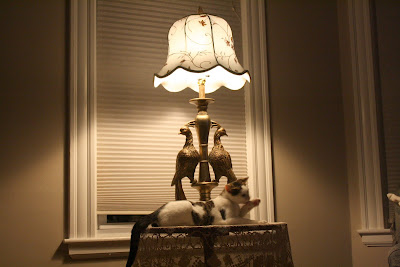 Percy takes a break too. He must have broken a sweat. 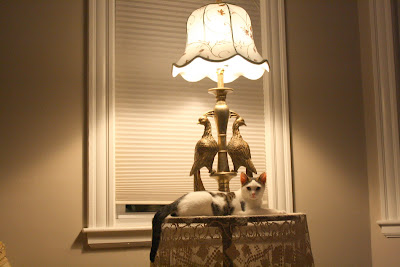 Oops, he caught me snapping his photo again. 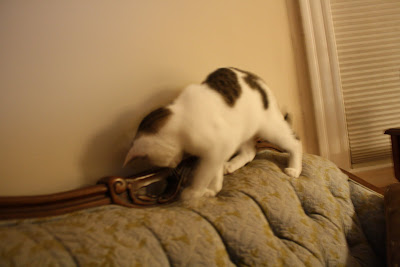 Please don't chew on the wood! 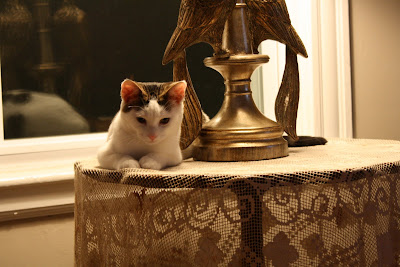 Thinking about what mischief he can get into next. 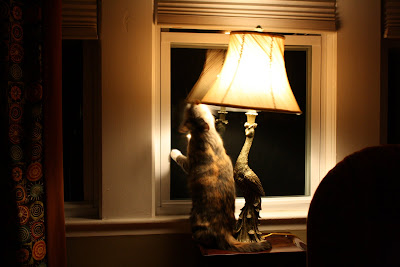 Oh there's Molly. She's no angel either. Watch the lamp Molly! Did you notice this lamp is different from the lamp in the previous photos? I took the tiffany lamp out of the favorite window of the kitties. I did not want it to get broken so I moved it to the hallway. 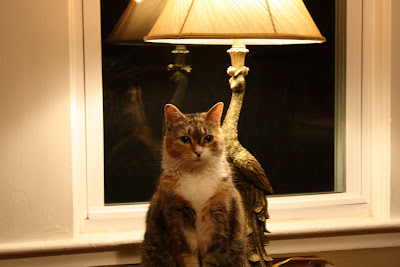 Molly likes to sit on her perch and watch the boys wrestle. 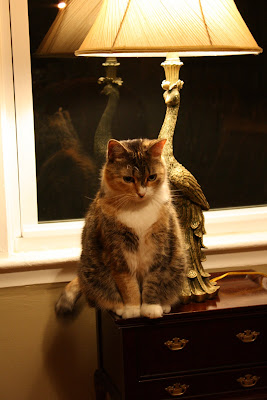 She thinks they're rather silly. 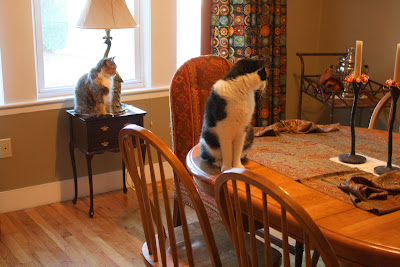 Nice Oscar, you know you're not supposed to sit on the table. Note the runner is turned up at the ends. Can't have fringe hanging where it can tempt kitties. 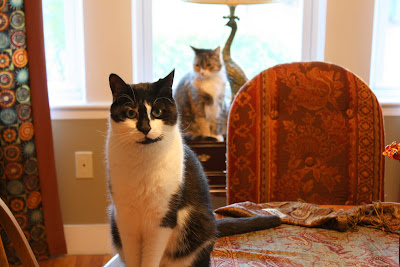 Oscar ignores my pleas to get off the table. 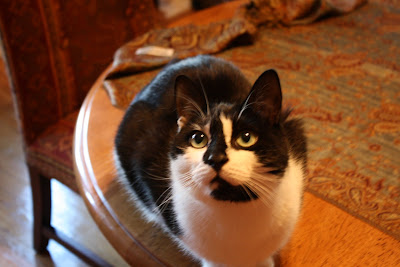 And he gives me that innocent look. Gosh he's cute! 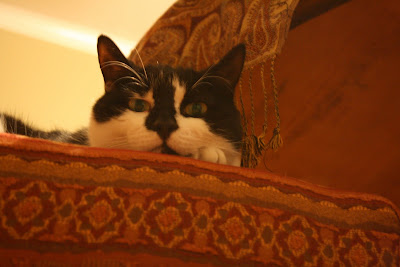 At least he got off the table and now he's on the chair. 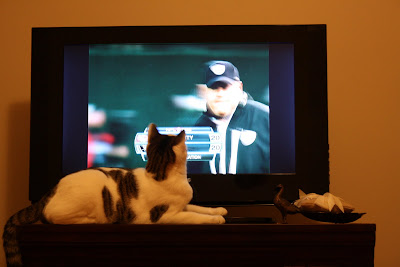 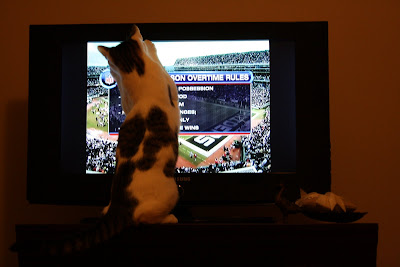 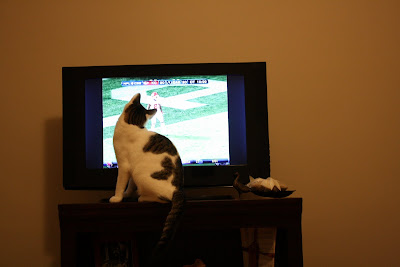 He likes to get real close to the screen so he can feel like he's at the game. 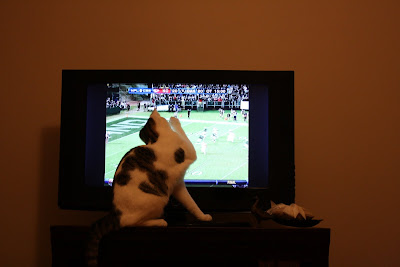 Please tell me he's not scratching the screen! 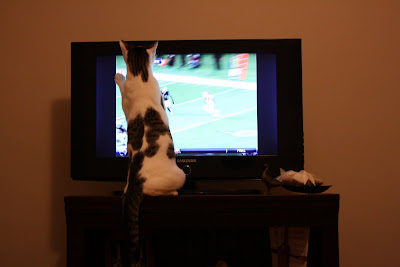 No really, he can't scratch the screen right? 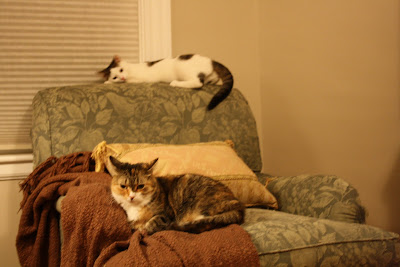 Molly was relaxing but then she felt like she was being watched. 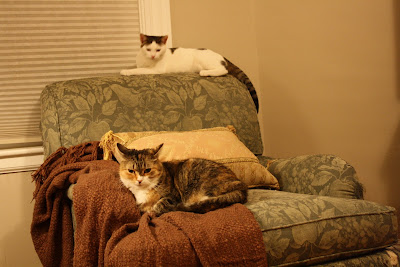 She was annoyed but she will put up with it for now. I can hardly wait until we put the Christmas tree up!
Email Post
Labels: kitties

From Beyond My Kitchen Window said…
How sweet are your cats? What fun you must have watching them tear through the house. Do they greet you when you come home and who is the loudest talker? Great photos!!!
November 8, 2010 at 6:54 AM

weaverpat said…
What a delightful post!!!
They are all cute, but that little Percy is adorable.
I think they are exceptionally well behaved. At our house the lamps would have been toast long ago. And how can anyone scold them when they look at you with those sweet little faces.
Thanks for a great kitty update!
November 8, 2010 at 7:01 AM

Robin Larkspur said…
Never a dull moment at your house. I think Percy is going to love, love, love the Christmas tree!
November 8, 2010 at 8:23 AM

Ocean Breezes and Country Sneezes said…
Cats have so much personality! They are adorable! My cousin had 2 cats that attacked a wreath on her wall once, I'd be so worried about your beautiful lamps! But boy they are cute!
November 8, 2010 at 9:12 PM

Anonymous said…
They're all so cute! Your cat Oscar looks alot like my Buster who is also nonstop play. Oh yeah, the Christmas tree will be a lot of fun for them!
November 9, 2010 at 12:06 PM

Sweet Sage said…
the sweetest tale i've ever read!!!
they are all so fortunate to have found you, Elaine ..
kitty capers aside .. yours is a house full of LoVe.
and your photos are AMAZING .. calendar quality, for sure!!
thanks for the BIG smile :)
kim
November 9, 2010 at 11:48 PM

We came over from chocolate and marmalade tea and find your blog delightful, but then why would we not, seeing felines having a great time to the horror and delight of their parents.

Now a days I mostly sleep but I do remember those days when I had energy to play for hours on end.

Good idea about the lamp but then it is very rare that a feline bumps something to fall and break.

Donna said…
Oh - my - Gosh! And I thought I had it bad! hahahah This is so funny because tonight I am posting some of Baby's latest shenanigans! At least yours are all getting along. Tiger, who is 17, has still not accepted the fact that Baby lives here. She wants nothing to do with her and hisses at her constantly. And then we had another bit of excitement, but that will definitely be a future post! Your 3 are all just ADORABLE! And I can relate to so much of what you wrote - tablecloths are a thing of the past for the time being, just as your runner. Oh my gosh, kitties are just to funny!... Donna
November 14, 2010 at 1:15 AM

Sarah @ Modern Country Style said…
We have three cats as well. I think I speak on your behalf when I say that all the best people do!

Unknown said…
Looks like you have quite the characters over there...they are cute! Loving your blog!
December 19, 2010 at 10:39 PM