A Souvenir from Maine 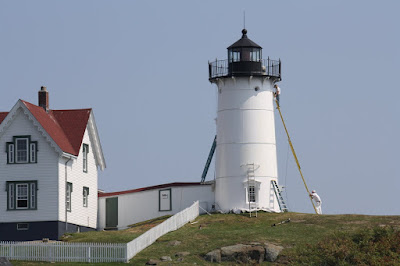 On Wednesday, we took a daytrip to Maine. We visited my friends at their two week cottage rental in Cape Neddick. It is literally across from Nubble Light. 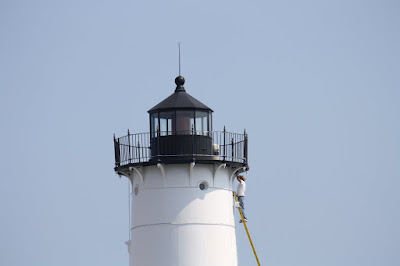 They were painting on Wednesday. 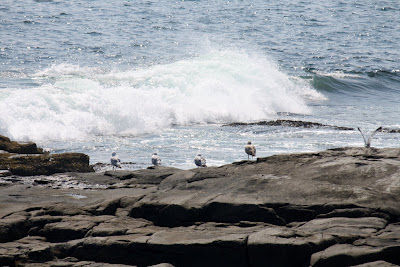 The surf was starting to kick up. And these birds were watching. 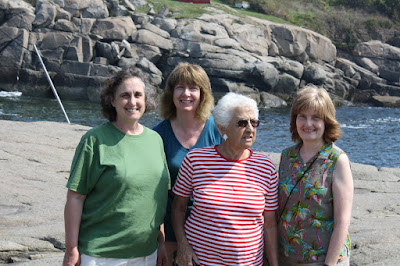 The gang posed for the annual photo. 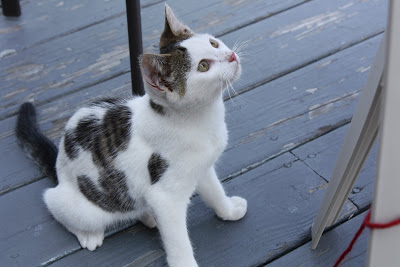 And then this little guy showed up. He immediately charmed all of us.
Actually my friends said he was sitting on the deck waiting for them when they pulled into the parking lot on Saturday. 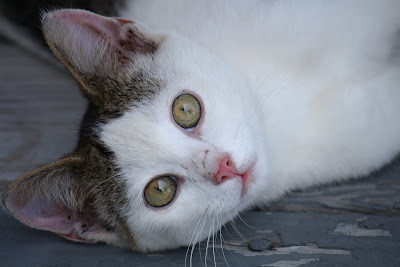 Oh my gosh, just look at this face. This poor stray baby was out on his own. 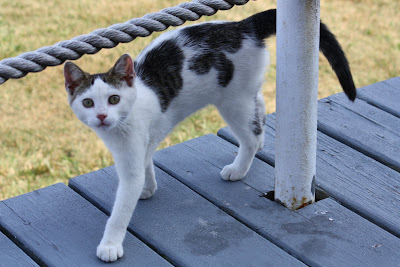 He strutted around the deck and we all fell in love with him. My friends had already bonded with him. 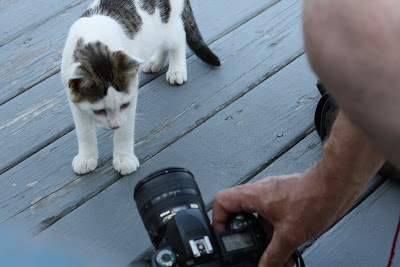 He was ready for his closeup. 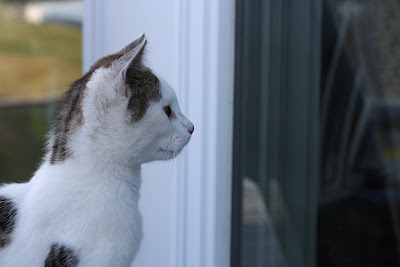 He checked out his reflection. 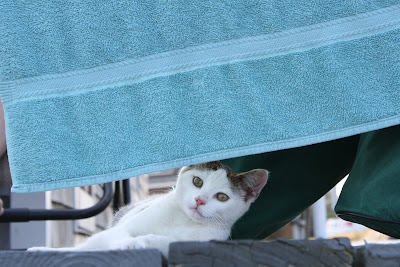 And lounged in the sun on the deck. 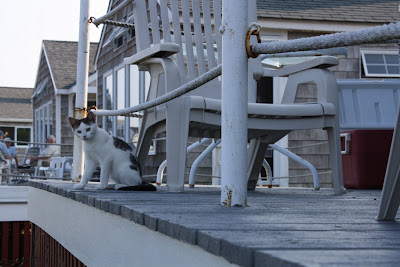 He contemplated jumping off the deck. Thankfully he didn't. He did try to take on some seagulls though. 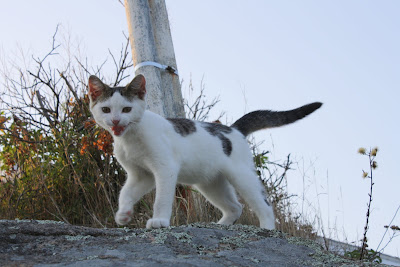 This one's my favorite. He's smiling right? Such a joyful little boy. 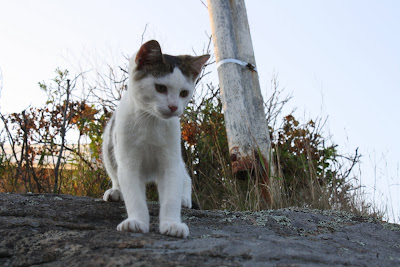 He certainly captured my heart! As you know we were expecting a hurricane or at the very least a tropical storm on Friday. So on Thursday night, I called my friends to discuss rescuing the little guy. No one wanted to see the baby out in the rain and wind of a tropical storm.

While I was on the phone with my friends, a woman appeared at their door with the kitten wrapped up in a towel. She wanted to rescue him but she couldn't take him home, too many pets already. My friends could not take him inside the cottage as there is a strict no pets rule.

So I offered my downstairs office as a sanctuary from the storm. My friends drove an hour to bring the kitten to me. He has been staying with me ever since. We still have to work out details regarding his forever home. On Wednesday he has a vet appointment. In the meantime he is safe from the dangers of being outside.

And I am getting very attached!
Email Post
Labels: kitties Maine Nubble Light

Elaine said…
Love the little stray kitten...so glad you are giving it a home. A sweet companion you have.
I spent some time in Maine when my daughter lived in Bidderford and my broth-in-law has a place at Old Orchard Beach. Love it there.
September 5, 2010 at 1:37 AM

Donna said…
Oh, my.. I have a feeling he has already found his forever home! haha He is SO handsome! The same thing happened to me back in the seventies. Someone I worked with had a 5 year old cat they could no longer keep. They said if they couldn't find it a home they were having it put to sleep (gasp!!!!)... I said I would take it and find it a home... Honestly, that's what I intended to do! How was I to know that his forever home would end up being with me!...

P.S. Thank goodness Earl was the hurricane that wasn't as I had to drive from Boston to Portsmouth, NH and back that afternoon/evening!... Donna
September 5, 2010 at 3:43 AM

Julie@beingRUBY said…
beautiful beautiful
He completely distracted me from the Maine shots..
What a funny little face he has.. so adorable... Do you think you will keep him??? I wouldn't be able to leave him out in the weather either..

Two French Bulldogs said…
It sure is beautiful in Maine. What a cute kitty kat
Benny & Lily
September 5, 2010 at 5:28 PM

Janet said…
What a sweet kitty; way too hard to resist. Of course in my mind any kitten is hard to resist! That's why we have always had multiple cats and never once have we sought one out, they just "find" us.
September 6, 2010 at 10:28 AM

Erin | Bygone Living said…
Such lovely photos, and beautiful kitten! That was so nice of you to take him in from the storm; I would have done the same exact thing :) ♥
September 6, 2010 at 1:05 PM

Sharon Lovejoy said…
Good for you and your big, warm heart.

I love Nubble, it is supposed to be the most photographed lighthouse on our coast.

All joys to you and your big heart,

kayellen said…
Oh~~~what a cutie Elaine!!!
Bless you for taking the kitty in! I am sure you will find a home..such a sweet face:)