What does one have to do to get a drink around here? 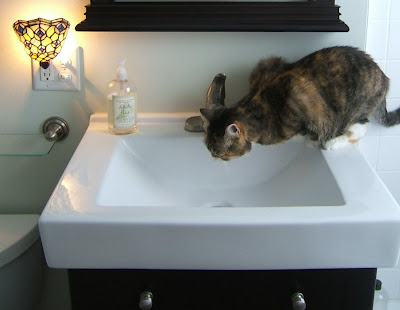 Poor Molly. She just doesn't understand. Normally she goes in the bathroom, jumps on the edge of the sink and I let her have a drink of the tap water. But here in the Boston area, we've been under a strict ban on drinking water or a boil water order. There was a huge water main break in the area on Saturday afternoon and thousands of people in 30 communities were affected. 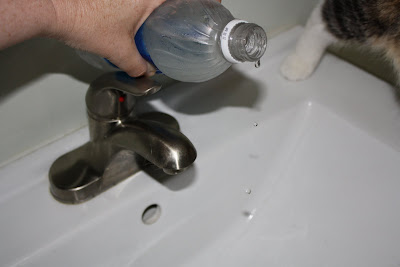 No drinking tap water unless you boil it first. So Molly has been beside herself because I will not let her drink from the tap. She refuses to drink from her water bowl which is a shame since I am using bottled water in the bowl she and Oscar drink from. Oscar could care less. He's used to drinking from puddles. At least, he was before I rescued him.

Molly is a bit of a princess. On Sunday, she sat on the lid of the toilet and whimpered every time I walked past the bathroom. I could take the pathetic crying no more.

I thought that she must like drinking the tap water because it is cold and it comes out in a stream. So I took one of the bottled waters from the fridge and I rested it against the faucet and tilted it so the water streamed out of it. 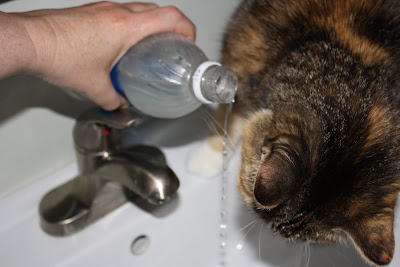 Molly didn't know what to make of it at first. 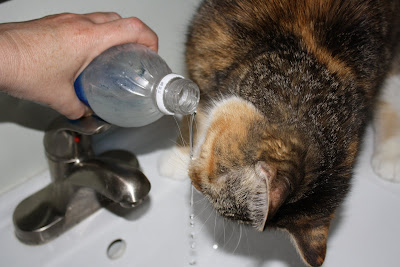 But then she gave it a shot. 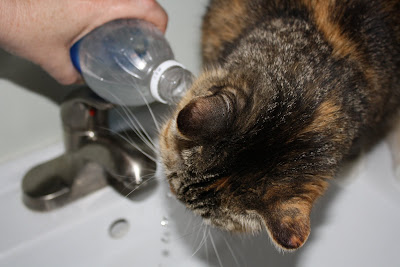 And she liked it- a lot! She started purring again and no more crying. Problem solved.

Now if they could hurry up and fix the problem I will be just as happy.
Email Post
Labels: Molly water ban

Donna said…
Oh my God, that is just too cute!! I've never had a cat drink out of the faucet, but my mom's cat used to - and he loved to sleep in the sink as well!
We delivered 3 gallons and 2 cases of bottled water to our Courtney in Boston yesterday. Since the town we live in isn't affected, the stores still have plenty of water on the shelves (unlike in the Boston area). I hope they get it all straightened out for you guys soon!!!!... Donna
May 4, 2010 at 12:02 AM

Julie@beingRUBY said…
just about to say the exact words by commenter above.. oh my goodness how cute.. and what grea 1 handed shots!!! haha

We had a scare like that many years ago.. can't remember the cause.. just the tedious water boiling.. i think i ended up buying water instead....

Hope it all gets sorted soon.. and things get back to normal...

Wendy said…
I, too, have a Princess named Cupcake that insists on drinking from the bathroom tap! I sing her a little song I made up called, "Mountain Stream" as she sips and purrs....I commend you for being a good "mom"! Let's hope your water situation clears up soon!
May 4, 2010 at 2:40 PM

Fete et Fleur said…
That is so precious and amazing all at the same time. Animals are wonderful!