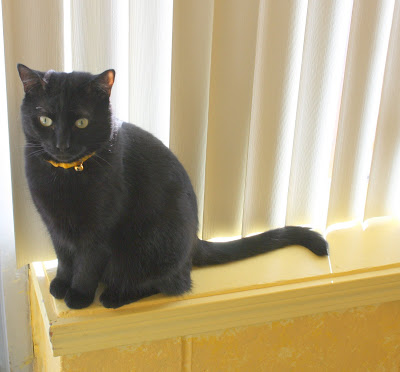 Last week, I took Molly to the vet for her annual checkup and rabies shot. While we were waiting to see Dr. Ricketts at the Beverly Animal Natural Health Center, we met a beautiful black cat. I was introduced to Stuart. Isn't he sweet? 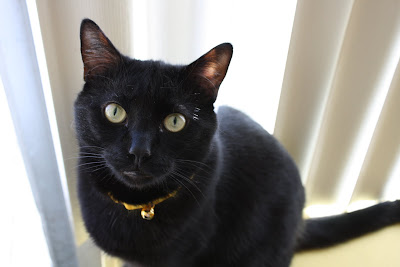 Stuart now resides at the vet's office because someone just left him on the bench in front of the building. Someone just dumped him there. Can you imagine that? It made me really angry. I am sure that Stuart will enjoy living at the vet's and probably it will be the best thing for him but really. Do people think vet's offices are safe havens for animals?

Anyway, I guess maybe the person who dropped him off thought they were doing him a favor. I shouldn't judge since I don't know their circumstances. 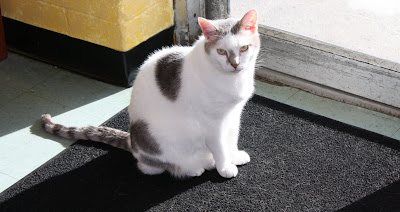 So Stuart joins Tucker, the other resident cat at the Beverly Animal Natural Health Center. Tucker was a great help to me recently. I thought I felt a lump on Molly around her chest area. I brought her in to see Dr Ricketts and she said it was nothing, it was normal. I thought how come I never noticed it before if it was normal. She explained that cats lose muscle mass as they age just like people do. She brought Tucker in and had me feel the same spot on him. It was much more pronounced on him. but he is a lot older than Molly. It put my fears to rest.

I really love the staff at the vet's office. I will continue to bring Molly and Oscar there as I know they will get good care. And I like seeing Tucker and Stuart.
Email Post
Labels: cats vet's office

Donna said…
Stuart and Tucker are just too cute for words. Isn't it wonderful to have a vet you love and trust? I'm sure Stuart will be very happy living there... Donna
May 12, 2010 at 11:47 PM

Julie@beingRUBY said…
Hi Elaine
Stuart and Tucker are gems... and poor little Stuart.. such a beautiful cat!! well I think he will be very happy now...

Janet said…
All my kitties are "rescue" kitties of one sort or another. As many cats as we have had over the years we have never intentionally gone out to get a cat. They just seem to find us!

We have a Vet who makes house calls. Her business is called Veterinary House Calls, but we call he "the drive-thru vet". Our cats hide when they spy a Volvo wagon in the driveway ;)
May 13, 2010 at 9:52 AM

Have a wonderful day Elaine...

I am still sore from the root canal~~only working a few hours today,,,and surgery tomorrw..oh my, I am ready for this week to be over~~~

Crystal Rose Cottage said…
They are such cute kitties! At least they are not roaming the streets and in a safe place. It's nice when we have wonderful veterenarians who we can trust our precious animal babies to!~Patti
May 13, 2010 at 10:44 AM

Fete et Fleur said…
That is so sad. He is a super gorgeous cat!! I do wonder at why people do these things???