The sofa and the estate sale, an intrigung tale 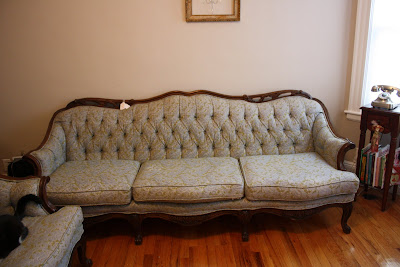 You may remember that I attended an estate sale in Winchester last weekend. When I posted I said I didn't buy anything. That statement was true when I posted on Saturday but then I went back to the sale on Sunday.

I liked a sofa and chair I had seen there on Saturday but I thought it was a) more than I wanted to pay and b) too big for my living room. The style was just what I was looking for so I decided to go back on Sunday and measure the sofa. I was hoping it hadn't sold. Not only was it still there but the price was cut by $150! I measured the sofa and sure enough it was smaller than the sofa I presently had in my living room. 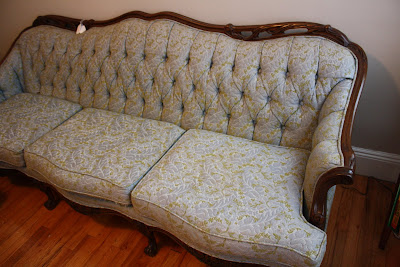 So I bought the sofa and chair with my Visa debt card. I obviously couldn't fit the items in my car so I spoke with the estate sale company owner and asked if I could come back and pick them up. He said sure, the homeowner would be there another week but to call him to arrange a time and if the homeowner moved sooner he would call me.

When I was leaving the home and almost at my car, a man called out to me. He had a print in his hand. He thanked me for coming to the estate sale and he said he wanted to give me a print of the North End of Boston. He said his uncle had done the artwork. I asked if he was the seller of the property and he said no, he was a friend of the family. Honestly, he kind of creeped me out. I am not sure why. I took the print and drove off.

Monday was a state holiday, Patriot's Day, On Tuesday, I saw that the money was withdrawn from my account and I called the guys who helped me move to the condo to help me with this job. We agreed that Friday at 5PM was a good time.

I called the estate sale guy on Tuesday afternoon to ask if Friday was ok. The call went to voice mail. I called again Wednesday morning, again voice mail. I had the guy's card so I had his email address. I emailed him Wednesday afternoon. He did not answer the email. Each time I left him a message, I asked him if Friday at 5PM was ok and I told him I needed to confirm with the moving guys. I thought it odd that a man who had a cell phone to his ear the entire time I was at the estate sale, would not return my call.

I had a bad feeling at this point and I began to think I'd been scammed. I did a little investigating. I called information and asked for the phone number for the business, no listing. I went online and checked out the website. It looked legit but how do you really know? Next, I looked up the business name on the Better Business Bureau website. Would you believe the business was rated an F? Scoring from A+ to F, this guy got an F! He had two complaints against him. One for a non delivery issue and one for a refund issue. After reading this information I was feeling sick. How stupid could I be! I filled out paperwork at the bank to dispute the charge.

And then....he called me on Thursday morning. He was all non chalant. He did not offer an excuse for the delay in returning my call and he tried to sell me a marble table that had been in front of the sofa! I said NO! He said Friday was fine, the homeowner would be home but he wouldn't be there since he had to go out of town. I still wanted the sofa and chair but I was none too pleased with his customer service. 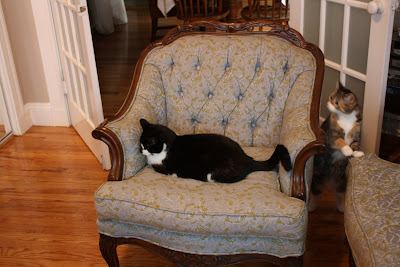 I met the movers at the house and they loaded the sofa and chair into their truck. I was dying to ask the homeowner how she knew the estate guy. I wanted to tell her I thought he was a con man. I waited for the right moment and then I casually asked her if she knew the estate sale guy. She said no, she found him through the yellow pages. She was an older woman with a heavy accent,very sweet.

I told her I almost cancelled the transaction because he took so long to get back to me. She said to me, "he does the same thing to me with the phone calls. He scares me." I said I didn't want to alarm her but if I were her I would get a full accounting on everything that was sold. I told her about his rating from the Better Business Bureau. She said she didn't know how much anything sold for and someone had shown up at 7AM to pick up something. He hadn't told her what was sold or when people were coming to pick up their items. She asked what I paid for the sofa and chair and I told her. I gave her my number in case she had more questions. I described the guy with the print and his car to her and she said she did not know him.

I don't think I overstepped. I really think this guy is a scam artist who is taking advantage of a trusting older woman and she needed to know that. I think he is going to take all the money that was made that day and cheat her out of her cut and then move on to the next victim.

As I left she grabbed my hand and thanked me for telling her and confirming her suspicions. She looked so sad, like she might cry but she didn't. 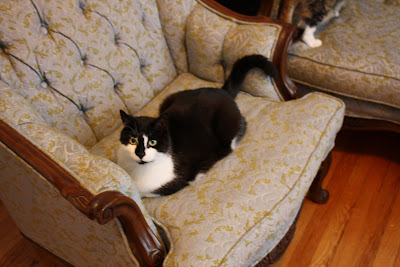 On a lighter note, as you can see, the kitties were very interested in the new furniture. Seconds after the guys brought the pieces into the living room, Molly and Oscar were circling and sniffing. Of course they had to jump on the sofa and chair. 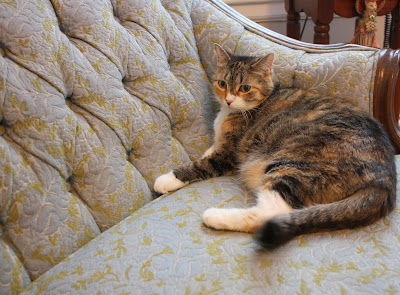 Molly settled in at the end of the sofa. And then HE wanted to sit there. 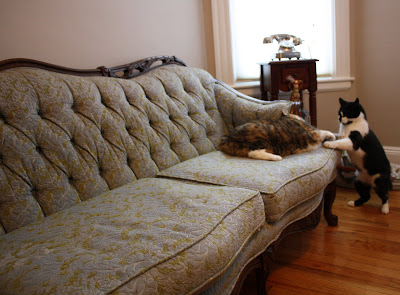 And then there was a fight. So the sofa and chair are home at last. I love how they look in the room. They do have a case of the musties. You know, they smell musty. The woman had them in her finished basement. So anyone got a cure for the musties? Something that is pet friendly?
Email Post
Labels: Estate Sale furniture

Isn't it ridiculous that people can have no conscience and take advantage of an older person? Their moms would be so ashamed.

All I can think of is to open the windows. Or possibly sprinkle them with baking soda, let it sit for a little bit, then vacuum it off. Fabreze is supposed to help too.

Salmagundi said…
The sofa and chair are wonderful! And, bravo for alerting the woman - but I feel so sorry about the situation. Hope she doesn't get taken. Years ago we purchased a couch similar to yours at an antique store; and we had it professionally cleaned to remove the musties. That worked for us. Sally
April 24, 2010 at 10:02 AM

Fete et Fleur said…
Wonderful set! I love it. I'm so sad for that poor woman. I don't know how people like that can live with themselves. He must be completely devoid of a heart.

Erin | Bygone Living said…
What a terrible experience- hopefully they didn't scam the poor woman. The couch and chair are absolutely beautiful, though!
April 24, 2010 at 6:16 PM

kay ellen said…
So glad you followed up and helped out that sweet lady~~
I am glad the funriture is in your home safe and sound! The kitties are tooo cute!

Have a wonderful weekend:)

Maybe try fabreeze and see if that helps? My Mom uses baking soda on anything that smells:))) leaves it on to sit over night and then vaccums it up the next day...

Blondie's Journal said…
I was so afraid this post was going to have a bad ending. Hopefully it didn't for the lady who hired the thief. I think you did the right thing by warning her. Good for you.

Now...I LOVE the sofa and chair. I don't know you well {okay...I don't know you!}, but I think they are you! And your kitties love them so they must be perfect for your home.

Stop by when you have a chance. I am having a giveaway! :-)

Donna said…
Well how sad is that. I think you did the right thing, notifying the home owner. I do hope she has some family that can help her and that she's not going through this all alone.

The sofa and chair are beautiful! Our kitties were never content to just lay on the furniture - it also becamse their scratching post! If you ever saw under my slipcovers you'd be horrified! Your babies look quite elegant on the new sofa and chair! I think they definitely approve!!... Donna
April 26, 2010 at 12:36 PM