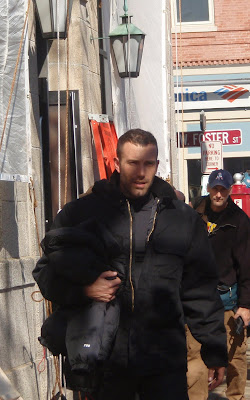 This is Ben Affleck. He is at the corner of Main and West Foster Streets in Melrose. This photo was taken by a friend of a friend and forwarded to me. Last Fall, Ben was filming the movie, The Town, in downtown Melrose. The filming was done inside an abandoned bank building on Main St.

The friend of a friend was just leaving Hourglass Gifts for a Starbucks run when she "ran" into Ben Affleck. She took the shot with her cell phone camera. 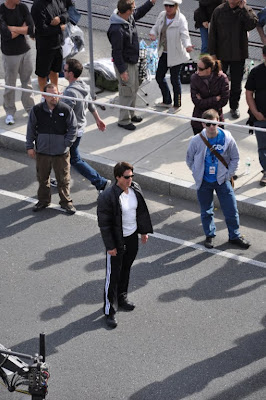 This is Tom Cruise. He was in Boston last Fall to film his new movie, Knight and Day. Cameron Diaz was also filming here.

Another friend of a friend shared these photos. The photographer is a banker who was on a sales call in the building above where the filming took place. 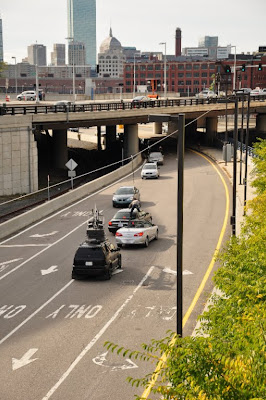 Looks like there's going to be lots of action in this movie. 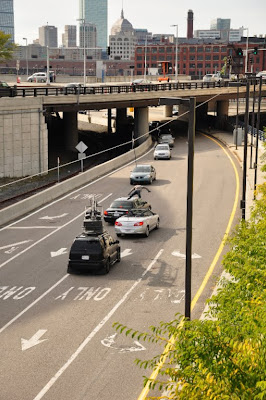 How fun it must have been to witness the filming of this scene.

Caught in the act by Tom. He was nice enough to wave. Although these Tom Cruise shots were taken in Boston, Tom did do some filming in Melrose as well. He had an evening shoot in Melrose under cover of darkness. No photos from that evening's filming.

Salmagundi said…
I haven't been to Melrose; but if I ever get back to the Boston area, I'll check it out. I don't think I've been there - one evening after getting off the plane from Europe, we were so lost and drove and drove and drove!!!!! Have a great weekend. Sally
April 22, 2010 at 2:51 PM

Donna said…
Oh my gosh, I know - there have been so many stars in the area filming. Mel Gibson filmed his latest movie (released earlier this year) right outside my daughter's dorm building last year, which was right off of Commonwealth Ave. I have seen previews for the Tom Cruise, Cameron Diaz movie and it looks interesting!... Donna
April 26, 2010 at 12:30 PM