Sears- The Bane of My Existence 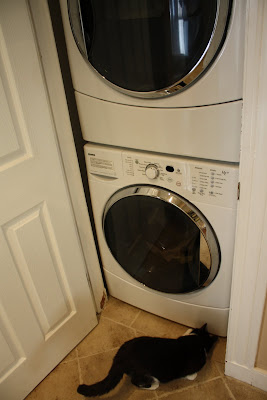 Here it is, my cursed washer and dryer from Sears. Oh don't mind Oscar. He thinks his toy is underneath it. 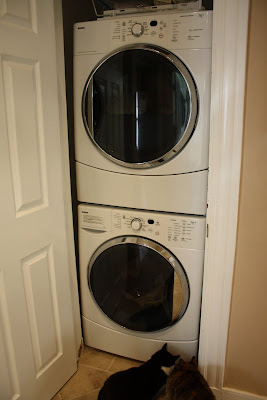 I'll bring you up to speed on why this is the bane of my existence. In November 2008, I bought a stackable washer and dryer from Sears. I bought the exact size unit as the previous condo owner had because it had to fit into this tight spot. It's basically a coat closet.

I have to say the delivery guys were buffoons. First they got lost twice coming to the house. They had to call me for directions. When they got here, they couldn't get the unit in the closet. They huffed and puffed and mumbled to themselves. They got the hookup done but they couldn't get it totally into the closet. They tested it and it worked. They forgot to take the manual out before testing the washer so the manual got soaked and they never sent me the one for the dryer they promised I'd get.

They were so frustrated they decided they could not get the unit in the closet and they unhooked it and left it in my hallway. They told me to call installation and they would arrange for "specialists" to come and finish the job. 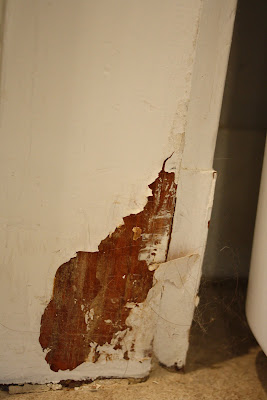 So here's the damage they did to the inside of the closet from all the pushing and shoving they did.

To add insult to injury, I had a 12 month 0% financing agreement with Sears for the appliances. The 12 months was up on November 9th and I made the final payment on November 4th in the store. Evidently, the store was switching over their payment system that very same day and my payment info was not recorded.

As a result, they tacked on the entire 12 months of interest to my next bill and reversed the payment. This was about $400+. I called in December and it was reversed and I had to go back to the store in January to pay again since they needed the info again.

For some strange reason, in February the interest came back on my bill. I called again and was assured it would be reversed. It wasn't reversed so in March I called again and this service rep sounded like it would really be fixed. He said it would be fixed and because "I had been through enough" he would waive the late fee. He said I had a small balance on the account for one item I had charged at Christmas and if I paid $42.94 the balance would be zero. I paid by phone and thought I would close the account once I got my April bill.

I got my Sears bill today, the interest was reversed, the late fee was reversed for March but the $42.94 had not been processed. Therefore, I am now 10 days late and I owe $2.00 in interest, a $15.00 late fee and the $42.94. I called again, got another person who I had to explain everything to and she reversed everything again and took the payment.

I am at my wit's end with this company. Does anyone have a good solution to the problem? I think I deserve some compensation. Can I claim mental anguish? Pain and suffering? Perhaps a boycott might work. After all, I think they deserve it. This problem has gone on for 6 months!
Email Post
Labels: Sears washer

Erin | Bygone Living said…
Oh, what a nightmare!! I wish I could help you, but I'm at a total loss with those sorts of things.

To look on the bright side though, at least you have a washing machine! :p I've never had one in my life, and let me tell you, it's an incredible inconvenience!
April 19, 2010 at 11:36 PM

Julie@beingRUBY said…
Oh Elaine
I can feel your frustration.. I had a similar occurrence with one of the big banks here... the same bank that mucked up a credit card payment which left me stranded in LA for 4 days with only $10 in my pocket!!! It took me 4 years to close the account!! FOUR!! and it was in credit... and yet still each year I would get an annual service fee which would then put me back in debit!!! OHHHHHHH my!!!

It is incredible how they get away with these things... I can only suggest documenting all of it and sending a copy to both them.. and cc a solicitor or suggest that is your next course of action .. it might just scare them into sorting it out....

A New England Life said…
Oy Vey! What a nightmare! It sounds like you've done a good job at handling the issue so far though.

Let us know how it goes, Elaine.

First, I would like to apologize on behalf of Sears for all the trouble that you have experienced with the installation and with our credit department. We value you as a customer and would like the opportunity to look into this for you and see what can be done to assist you. My name is Shayne W. and I am part of the Sears Cares escalations team. At your convenience, please contact our office via email at searscares@searshc.com so that we can look into this for you. In the email, please provide a contact phone number and the number that the units were purchased under (if it is different from the contact number) and we will call you directly. Also, please provide the screen names (Chatelaine) used to post here for reference to the issue.

Fete et Fleur said…
It's weird how this sort of thing happens. It's like a snowball out of control. If I were you I wouldn't shop there unless you have to.

Fete et Fleur said…
I just read the SearCare thing. Is that for real!???

Janet said…
I have heard many tales of woe about Sears and what is particularly irksome is that they used to be so very good (before they were horrid)!
April 21, 2010 at 10:13 AM