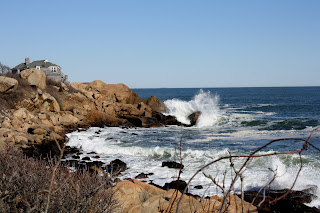 It was Saturday, 50 degrees and sunny. You know where I was headed, Rockport! I was going to enjoy my first sunny day by the ocean in approximately 5 months. 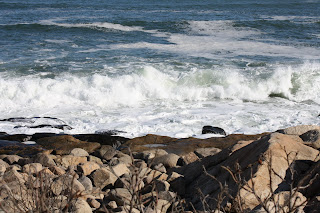 I bought a new camera two weeks ago but I was actually afraid to open it. It's a digital SLR and more complicated than my little point and shoot. I was intimidated by my own camera! I dreaded the thought of reading a manual to learn how to work the thing. By the way, "the thing" is a Canon EOS Rebel XS. Today, we became friends. 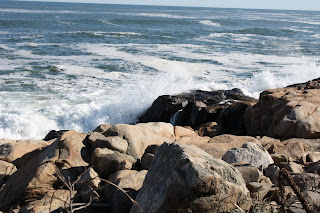 We went to Good Harbor in Gloucester. We watched the lusciousness of the waves. All foamy and white. The wind was whipping the sea around and 50 degrees? I beg to differ. Wonder what the wind chill was, my ears sure were cold! 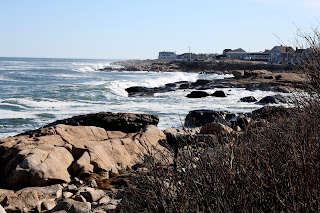 We enjoyed watching the waves for quite a while. 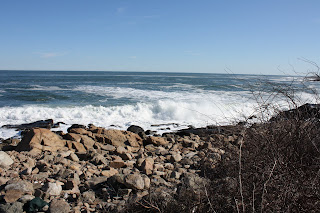 The Atlantic was a beautiful dark blue. It still had the winter look to it. Not as friendly as in Summer. 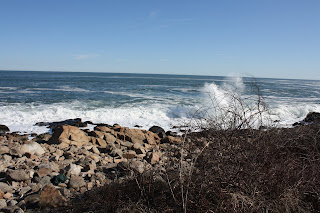 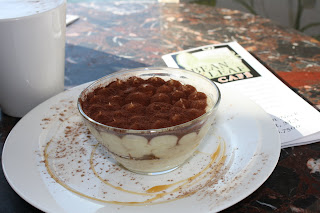 After Gloucester, it was off to Rockport. I headed straight to the Bean and Leaf Cafe for some caffeination and a little Tiramisu. Well, a lot of Tiramisu. Don't worry, I planned to walk it off. 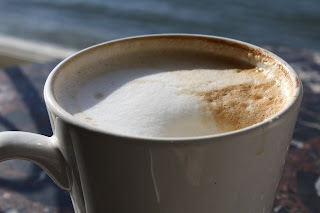 It was a day for foam. Foamy waves, foamy latte. Yum!

I loved the reflection of Bearskin Neck in the lantern. 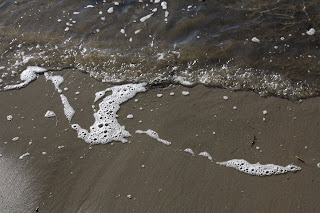 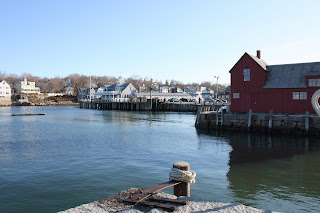 The red Motif No. 1 is a famous landmark in Rockport. It was destroyed in the Blizzard of '78 and was rebuilt since then. 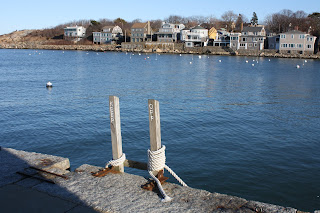 Keep Off! How rude! 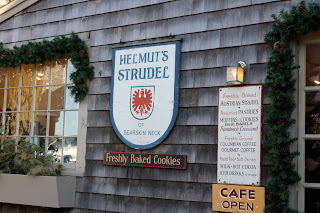 Helmut's Strudel shop, my most favorite shop in Rockport. And yes! It's open. I can grab some streudel for later. 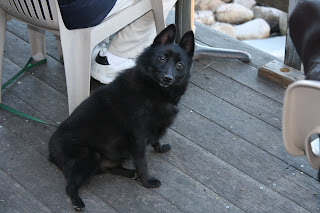 I bought a box of streudel and made a new friend. He's a Schipperke. Cute, huh? 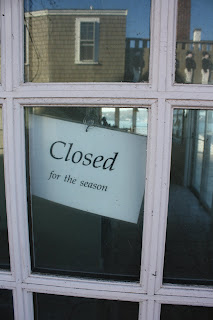 Closed for the season. I saw a lot of signs like this today. Good thing Helmut's was open! 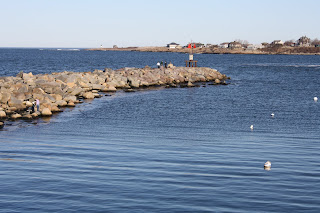 I didn't walk the rocks today. Sometimes I go out to the end but it was pretty windy and I didn't want to chance falling with the new camera. 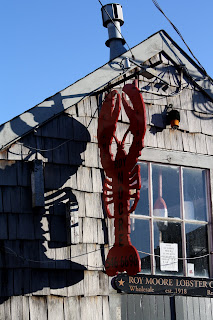 Anyone for lobster or lobstah as we say it round these parts? 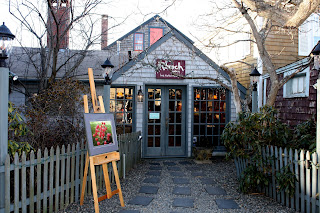 This gallery has lovely photographs of Cape Ann and Europe. I think it is such a pretty spot, even prettier in Summer. 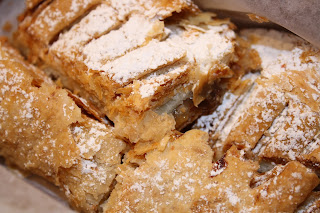 So here it is, the buttery, flaky, oozing with apple, streudel from Helmut's. Can you blame me for wanting to tear into this right now? Ok then, good night!
Email Post
Labels: daytrip Gloucester Rockport

A New England Life said…
Look at you and your new camera! You'll get the feel of it, and it won't take long. The two of you already appear to be working well together.

It must have been a wonderful day on the cape, though a bit more chilly than inland. That's the same cafe my daughter and I ate at! Nothing else was open though. As you said, closed signs everywhere. I don't recall the strudel shop being open the day we went either.

Love the lantern shot! The reflection is wonderful! I took a shot of that lantern too, but looking through it instead. You made me feel like I was back there all over again : )

Salmagundi said…
I always look forward to your day trips. They bring back so many east coast memories for me. Enjoy your week. BTW, you and your new camera are taking great shots together. Sally
March 7, 2010 at 2:03 PM

Julie@beingRUBY said…
Oh I'm so excited.. You know I love your daytrips and rockport won my heart last time.. but also!! you have a new camera.. how exciting.. I really keen to get an SLR and I am a canon lover.. in fact I've read alot of good comments about the Canon EOS Rebel being a good starting point.. i wonder if it has the same model name here.. will have to research that,.

Unknown said…
What a lovely post, I love Cape Ann, and Rockport is beautiful. I just saw your post about Nesting on Main, my favorite shop in Concord. I was in there today and Wendy told me a blogger had just written a post. When I searched, I found your post from last year. You wrote a gorgeous post about that too.
Karen
March 9, 2010 at 7:45 PM

Yarni Gras! said…
I always feel like I'm walking with you through your posts. You take such wonderful photos and then explain everything so beautifully.
March 11, 2010 at 7:46 PM

Terri said…
This is such a beautiful and heartfelt post.My husband and I spent many days walking Bearskin Neck.I will be going to Rockport over Easter weekend on a mission. I will be leaving my DH in the beautiful sea.Ashes to ashes...he so loved Rockport and the ocean. Thanks for sharing. Hugs, Terri
March 22, 2010 at 10:22 PM