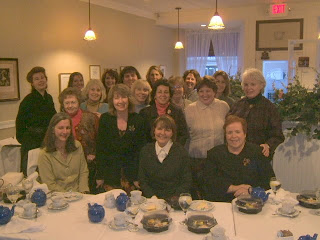 This afternoon, I watched the movie, Julie and Julia. Am I the last blogger to see this movie? I think so. The Netflix DVD had been sitting on the table unopened for about 3 weeks so it was time.

The weather was snowy and windy. It was a perfect day to stay indoors and watch this movie with my mom at her nursing home.

As most of you know, in the movie Julie Powell loves to cook and Julia Child is her inspiration. So, Julie decides she will make every recipe in Julia's cookbook in 1 year. Julie also has hopes of meeting Julia in person.

I thought about a similar situation in my own life. Well, it's not all that similar but I'll tell you anyway. I collect Susan Branch cookbooks and I've made some of the recipes in them. They're more than just cookbooks to me. I love to look at Susan's artwork and read the quotes and read about the seasons in New England (even though I live here I still like to read about it). I had always hoped to meet Susan. After all, she lives part of the year in Martha's Vineyard and I live in the same state! So Susan inspires me like Julia inspired Julie. 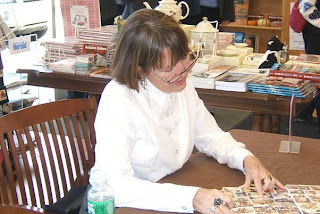 I mentioned before that I am a member of an afternoon tea group. In November of 2007, two of our members, Pauline and Heather, arranged for the group to go to tea in Plymouth, Massachusetts. First, we were going to a bookstore in Plymouth where Susan Branch was doing a book signing then we would have tea at a tearoom in town. I was so excited, I was going to meet Susan Branch! 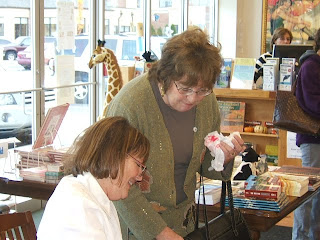 Susan gave a little talk before the booksigning and she was exactly as I hoped she'd be. She was funny and sincere and so unaffected by her success. She was upbeat and approachable. I loved hearing some of her life stories. 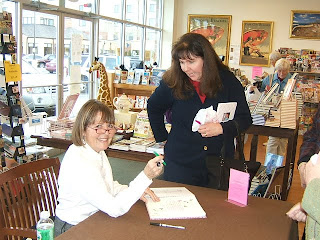 She spoke to each person who had a book to sign as if they were the only ones in the room. She didn't rush anyone, she listened to people tell her their stories.

Here's my friend Deborah getting my Christmas memories book signed by Susan. Susan did a little drawing of a holly leaf and signed her name. See she's looking at me saying oh this is your book? I had been standing at the side of the table furiously snapping photos of everyone in our group who posed with Susan. I was probably quite the pest but if Susan was annoyed she didn't let it show. 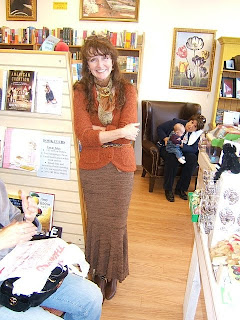 Susan had some of her friends with her that day. This is Margot. I love her sense of style. Margot was also very friendly and down to earth. 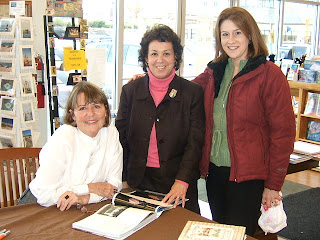 Susan posed for photos with everyone. The signing took over 2 hours. Lisa and Erica were happy to take a photo with Susan. 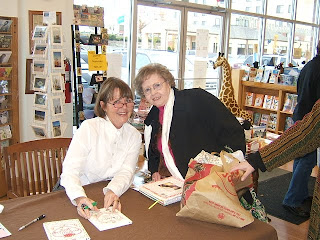 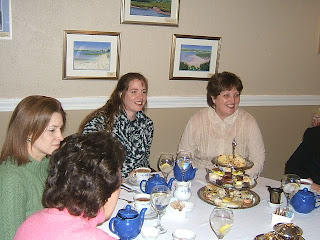 After the booksigning, we went for tea. I wish I could remember the name of the tearoom. Anyway, it was lovely. Great food and the owners were so accomodating. Pauline told us she had asked Susan and her friends to join us for tea and they said they would! We were all so excited to have tea with Susan and her friends. 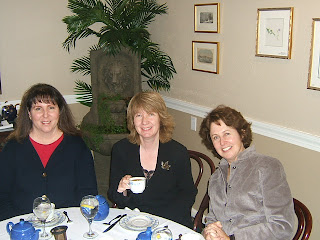 Here's Deborah, me and Kim. 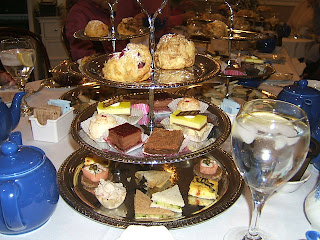 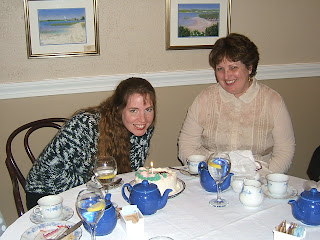 It was Heather's birthday so we had to have cake too. It was a fattening day what can I say? 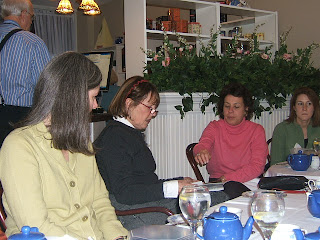 Here's Susan having tea with Amanda, Lisa, and Erica.

Back to the movie Julia and Julie, obviously Julie did very well after her year of cooking and blogging. They made a movie out of her story. I don't plan on anyone making a movie about me and my experiences but at least I got to meet someone who inspires me. That's a highlight in my life. (Now don't expect me to make all of Susan's recipes in the next year).
I do, however, plan to make Susan's baked apple crisp soon.

Now scroll back to the beginning to see the group shot! It was an afternoon to remember for our tea group.
Email Post
Labels: afternoon tea Susan Branch

Unknown said…
What fun, spending the day with your mom watching Julia and Julia, and tea with Susan Branch. What a double blessing. I love Susan Branch. Even more than her recipes, it's the way she writes her cookbooks that really make me smile. Thank you for sharing your adventure, what a lovely tea.
Karen
February 27, 2010 at 8:59 PM

Erin | Bygone Living said…
Susan Branch is my number one inspiration in life, truly. From the first moment I picked up her Autumn book, I immediately recognized that I found the one person who could put my dreams into beautiful illustrations and words.
I can't imagine how wonderful that must have been to meet and have tea with her! I live in NY, but recalled when she was signing in Plymouth, and was seriously considering driving up there! Of course, I couldn't at the time.
I talk to Susan on Twitter occasionally, and she even once wrote on my blog! It made my day, needless to say ♥ She's such a kind-hearted woman.

Julie@beingRUBY said…
Yeah Elaine
Looks like you had a great day!! You know I only watched that movie last week!!! backward aussie you know!! haha.. Actually it's been out her a while but i just go around to it...

Well.. being a backward Aussie I had never heard of Julia Child until the movie came out.. so you will understand I also haven't heard of Susan Branch!! but it's great when someone inspires you.. and they seem so personable and then to find they are the same in real life!! Brilliant!! Looks like you all had a wonderful time... I hope to see a post of your Apple Crisp sometime soon!! hehe.. Have a great weekend xx Julie
February 27, 2010 at 9:41 PM

My how lovely that you were priviledged to be able to have afternoon tea with Susan Branch; I love her work!.., Thanks so much for stopping by for our little afternoon tea!

I also find far that I'm far too busy attending to boiling water and serving hot tea to eat my goodies as well, other than the occasional nibble! (Good thing for me as well)!

Susan Branch said…
Oh how nice to see your blog and relive a wonderful day! Julia Child was my inspiration, I did what Julie did, learned to cook through Julia's book, but there were no blogs in those days, just all us fat jolly people tasting her wonderful food! Thank you for this sweet memory! Also love the kitty who had you at Hello! Here's to you girls (click teacups!),
Susan Branch
February 28, 2010 at 8:41 AM

Rachel Lucas said…
Hi! Found your blog through Sue's 'retweet' and I'm so glad I did! I loved this post and I'm really happy that she left you a comment too!It looks like a wonderful afternoon. We've been friends for over 18 years now and I can assure you that she is every bit as wonderful as you found her, all the time! The world is lucky to have her (and YOU!!) lots of love, Rachel xox
February 28, 2010 at 9:03 AM

French Kissed said…
What a lovely time you all must have had. Thanks for stopping by FK and leaving a comment for it led me here and I have thoroughly enjoyed my first visit. I will return for more as I am so happy to have discovered you and your wonderful site. ~jermaine~
February 28, 2010 at 9:20 PM

Cindy said…
I love this post! I love Susan Branch too! Awhile back she had sent me some photos of her house on Martha's Vineyard to share on my blog! I thought it was a joke when I saw an email from Susan Branch in my email inbox!
March 2, 2010 at 5:56 PM

Marilyn said…
Thanks for dropping by my recipe blog and leaving a comment. I spend more time with my other one and even have photos on it! I only saw the movie recently when my daughter brought a Netflix copy home. Thanks for sharing your tea time with us.
March 2, 2010 at 9:17 PM

kayellen said…
What a beautiful story and event~~Hope someday we can tea in Boston:)

Thanks for stopping by:) Feeling a little better tonight and the 800 mg Motrin is my friend!