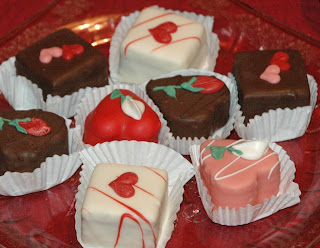 So my last post was a bit of a downer. As we all know, romance has it's ups and downs so tonight I am posting about the sweetness of romance.

My first romantic experience was when I was 8 years old. I was admiring a fellow student's ring. He had a Batman ring. It looked like a hologram and you could see different pictures on the face of the ring depending on how you held your hand. I told Donald I liked his ring and he promptly took it off and gave it to me. He said to me, "Now we're engaged." Not knowing what that meant I said ok. When I came home from school, I told my mother I was engaged and then I asked what it meant. I think she found it quite amusing.

My first job was at a movie theater. I sold popcorn and candy and I was 15 years old. I was still working there when I was 16 and I was particularly taken with one of the ushers who often worked with me. He was funny and smart and he had blue eyes that twinkled when he smiled.

We shared a wonderful friendship and in my mind I thought we were dating. One day he asked me to go to the Red Sox baseball game with him. I had never been to Fenway Park and I don't think I'd ever even ridden the subway. I was a little nervous and very excited about making the trip into the big city. We got on the crowded subway and we got separated. When we reached our subway stop, he looked for me in the crowd and he reached for my hand. He helped me off the subway and continued to hold my hand. "I don't want to lose you", he said. I was totally smitten (my Dad's word) with this boy.

Don't you love a man who makes you his first priority? One of my exes used to call me mid-week and ask me what plans I would like to make for the weekend. Whatever I wanted to do was fine with him, he just wanted to spend time with me.

Another ex-boyfriend did the sweetest thing for me on our first date. We were going to a Christmas party and he was driving me to the party in his pickup truck. I got in the truck and he handed me an afghan. He said, "Here, I brought this for you. My truck takes a long time to heat up and I figured you could throw this over your legs so you won't be cold."
Wasn't that sweet?

Ok, now it's your turn. Got a sweet romance story? Email me @ chatelaine08@gmail.com I'd love to hear from you.

Blondie's Journal said…
These stories just melted yt heart. Little bits from a book or movie (I did read your last post and I would love to meet THAT guy face to face) they seem to be!!!

How we do remember the littlest things? A tiny thing I remember that stays with me when I look back at single times is a guy that I hadn't dated for long but had a terrible mutual break~up with. Months later on a snowy night I was leaving a bar when he came out and motioned me to roll down my window. I thought he had something awful to say. He shouted, "Jane, you have the softest skin of anyone I know!"

Sometimes it's good for the ego to remember things like that!

The Curious Cat said…
What beautiful cakes...and what a lovely entry...I just popped in randomly to say hello and I am glad I did...I won't write about love though, I'll just appreciate your stories. I lost the love of my life this Christmas - we went our separate ways after 5 years - and even though I'm coping okay, sometimes I still cannot comprehend that it is over...all those wonderful memories...all that love I had/have for him...now...what do I do with it? Love can be wonderful - I love being in love and sharing it with someone but gosh, it can knock seven shades out of you when it turns sour... Sorry, that is a bit of a damper on the subject...when I feel better and over the hill, I'll have plenty of good memories to share! Loved hearing yours - reminds me of the goodness of people...xxx
February 5, 2010 at 4:39 AM

Julie@beingRUBY said…
Hey Elaine
Such sweet memories.. how true it is the little things that have the biggest impact and leave a lasting memory.. of course .. right now.. i cant remember any..hahaha..ooops.. maybe as it is 2:30am .. that's my excuse!! Well I try to remember a worthwhile story and come back and contribute

OH... i just remembered one!! I met a guy in Italy.. not really a boyfriend.. only knew him 2 days haha .. but some months later I received a parcel in the mail.. He had someone take a photo of him holding a huge poster he had made himself that said 'Julie xxxxx is the best!' hahahahaha I didn't know whether to be embarrassed or pleased... it was cute thought!!

I love all your sweet stories of Romance:)

Salmagundi said…
I've been enjoying your 'love' (the good and the ugly!) stories. Keep them coming. I have had so little dating experience, it has been fun for me to hear these stories. I really only dated my husband from 7th grade on; we married at age 19 51 years ago. Are you getting pounded with snow this weekend? Stay warm. Sally
February 6, 2010 at 7:14 PM

A New England Life said…
Such sweet love stories from everyone! I like the subway story Elaine. He had a good heart. Hopefully he still does.

Funny how I can't remember a lot of guys doing nice things for me (besides my husband) but I sure can remember the cads!

I have to tell you this story Elaine! I was supposed to go pick a guy up for an afternoon date so I went to his place and there was no answer. Leaving I felt quite hurt as I knew he had blown me off. As I'm driving along through town there he was in the backseat of a convertable with his arm around another girl! What a loser!

I married the most wonderful man! After all the crap I went through in the dating/boyfriend department I certainly deserve it!