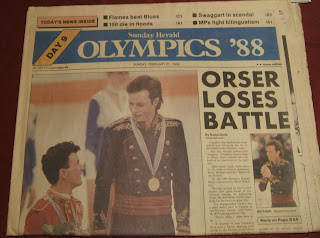 The first time I watched the Olympics was in 1972. My dad called me into the living room. "Lainey, come look." He was watching the figure skating competition and Janet Lynn was performing. "Isn't she beautiful?", he said.

She was radiant, gliding over the ice effortlessy, big smile on her face, I was mesmerized and I became totally hooked on figure skating.

Fast forward sixteen years to 1988. The Winter Olympics were to be held in Calgary. Canada is not that far from New England! I signed a reservation form for 2 sets of tickets and my sister and I made our plans. We picked 11 events. We were going to see several figure skating events, ski jumping, hockey, and a bobsled event. Would you believe the whole ticket package was only $325? This was before the days of exhorbitant ticket prices.

We got paired with a Canadian family for a Homestay program for $25 a night, bed and board. It turned out the family was originally from England. What a lovely couple,they took us touring on days we didn't have events and gave us meals for no charge. We even had the bottom floor of their house as our own little apartment. They were like family to us.

Although they lived in Calgary, they were not able to get tickets to any events. There was a lottery for local residents and they didn't win. The wife had sewn some of the costumes for the Opening Ceremonies and still no tickets. The husband was an avid hockey fan so we gave him our hockey tickets for one of the games. 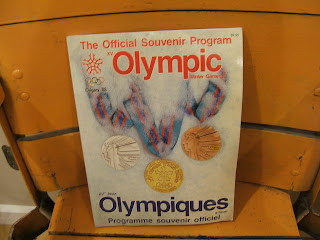 Here's the program. Yes, that is my chair from the original Boston Garden but that's for another post. 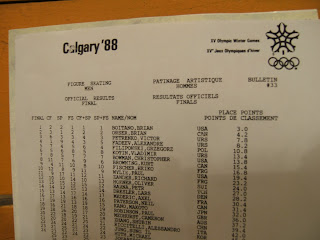 I kept a copy of the final standings. These were printed for each competition. 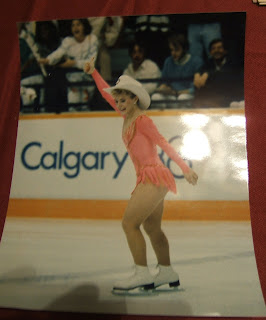 We bought some photos from the Calgary newspaper. This is Liz Manley, a surprise medal winner in ladies figure skating. She was from Canada so the country was ecstatic that she won. 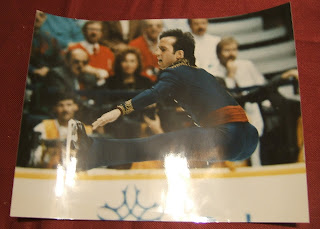 Brian Boitano took the gold for the men. We were overjoyed to see his spectacular performance. His warmup was scary and we were worried he would not do well. 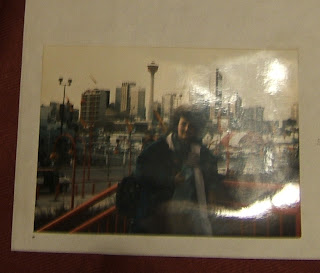 Here's my sister at the Saddledome, a very cool arena. You can see the Calgary skyline in the background. Look at her 1980's big hair! 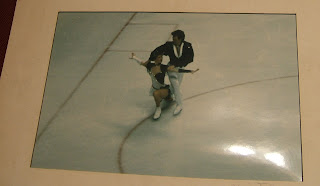 My sister took this photo of the leading Russian ice dancing Team. 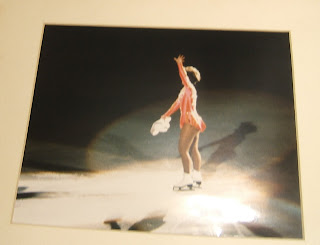 Another photo by my sister of Liz Manley at the exhibition of champions. 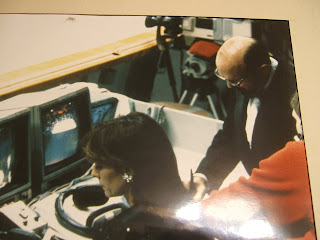 This is Peggy Fleming and Dick Button. We had phenomenal seats for the men's event.
We had a clear shot of the ABC booth. I swear we got our tickets upgraded because of an incident with the reservation form. It seems the Canadian ticketing manager was doing something fraudulent with the American requests for tickets. I don't remember the whole story but they impounded my personal check and I never got it back. I received a letter saying it was evidence in a court case. I didn't care, we were in something like the second row for the men's long program. In fact, if you watch a video of that event you'll see my sister and me on camera! 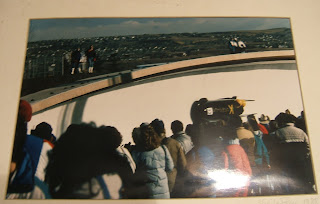 Remember the Jamaican Bobsledders? They were the talk of the Olympics in Calgary. My sister was able to get this shot of them as they whizzed by. They sure go fast!The chinook winds had blown in during the Olympics and the temperature hit 50 degrees. That makes it a little slushy for the bobsleds. 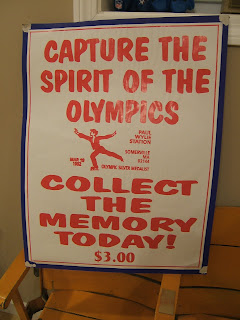 After our Olympic experience in Calgary, we were obsessed with the Winter Games. We wanted to go to Albertville, France in 1992 but it was expensive and we didn't get to go. However, my sister made a couple of Olympic connections. Paul Wylie was on the men's tean in 1988 and 1992. He was living in Massachusetts at the time, in Somerville. The post office wanted to do a commemorative stamp for both Paul Wylie and Nancy Kerrigan since both had medaled in Albertville. My sister was called upon to do the design for the postmark. Here's the poster of the postmark. 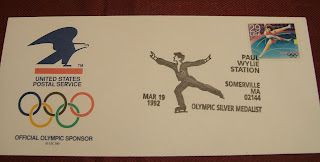 This is the envelope from my collection of Paul Wylie's stamp.

I had this one autographed by Nancy Kerrigan. She was living in Stoneham, Massachusetts with her family and my sister and I also were living in Stoneham.
We went to Nancy's parade and reception. My sister also did a painting of Nancy
which is now hanging in the Stoneham Public Library. When I find the picture
I'll post it.

So there you have it. I am off to watch the ice dancing original program tonight.
I'll be wishing I was there in Canada watching in person. Well at least we'll always have Calgary!
Email Post
Labels: Olympics skating

A New England Life said…
How cool is that Elaine! Such great memories! It doesn't really seem like that long ago when Brian Boitano and Nancy Carrigan were skating in the Olympics. I watched it all play out on TV. We always watched the figure skating, my dad and I.

What wonderful memorabilia. I always wished I could go to the games too but now I'm not sure I could handle the crowds.

Julie@beingRUBY said…
Fantastic story 'Lainey'
How incredible to have that experience.. staying with the Canadian family.. making new friends.. seeing the events live... wonderful!! I love the ice-skating to but keep missing it this time round.. i'l' flick on and off the channel showing the olympics and always get back there just as they finish!! Seen a lot of good finishes this time!! hahaha

you know when the olympics were here in Sydney I was working for Westpac.. [ 1 of the big 4 banks here].. as they were the major sponsor that had a pool of tickets at staff rates.. stupidly I thought I didn't want to go.. then at the last minute someone sold me there baseball tickets for $20 each.. I took my nieces and nephew and we had a blast.. my first baseball game!!

So glad you passed those hockey tickets on to that family... I am sure they will remember that forever!! And your sister's design work.. incredible!!

Edie Marie's Attic said…
What great memories you have of such a special event! I've always been glued to the TV watching the winter Olympics and I remember the 88 Olympics. YOu have some great memorabilia from it.
There's something special about the Winter Olympics and the talent that emerges from it.
Thanks for the memories! Hugs,SHerry
February 23, 2010 at 5:42 AM

Fete et Fleur said…
WOW!!!! What an incredible experience. The photos, the souvenirs...you were so blessed to be able to be a part of the Olympic spirit.