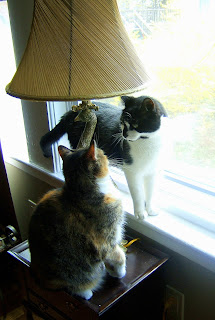 Today I'm posting about crazy love. You know, the crazy things we do or did in pursuit of love. It may have been years ago or maybe just yesterday, but, most likely you did something crazy to attract the opposite sex.

In conversation with my sister about the matter, I realize that anything I did pales in comparison to some of her stories. She has granted me permission to share a few.

Once upon a time, my sister was working at a bookstore. The assistant manager of the store was an extremely handsome, tall, blond, blue-eyed man. My sister found him very attractive and interesting. I shall call him "blond guy". They enjoyed a friendship, but, my sister liked him liked him and so she set out to be more than friends.

She knew two things about this man. He hated working in a mall. No windows and no way to see outside, he loved open spaces. She also knew he loved all things French. So she prepared a picnic lunch complete with french baguettes and cheeses and she invited him to join her outside in the mall parking lot. They ate their lunch on the median strip on the blacktop.

My sister told me a second story, actually I remembered most of this one. That same summer, my sister was interested in Errol Flynn movies. She had conversations with "blond guy" about old swashbuckling movies. She knew "blond guy" had a favorite movie theatre near where he lived and an Errol Flynn movie just happened to be playing at the theatre. So she had one of our guy friends call him up and say that he had won two movie passes to the Errol Flynn movie. He surely would ask my sister to go to the movie with him right? Wrong, he never mentioned it to my sister so finally she had to come clean and ask him about the phone call. He said he knew it was just Sheila being crazy! They never did have a romantic relationship but they were good friends amd he made work fun for her.

I tried to come up with some of my own crazy stories but I couldn't think of anything that interesting or creative. Once when I was working as a bank teller, I met a guy who was a welder. He came to the bank every Friday to cash his paycheck. If I didn't wait on him, I wouldn't get to talk to him and then he would never ask me out. So whenever I spied him crossing the bank parking lot, I would ask all the tellers to either close their windows or walk away from the teller area. Poor guy must have thought I did everything at that branch since I was the only one he ever saw. It took about three months but he did eventually ask me out. We went out for a while but I think the pursuit was more fun than the end result.

So how about you? Any crazy confessions? And do check out my playlist. I added some "crazy" songs including one by one of my sister's favorites, Paul Simon.
Email Post
Labels: crazy love

Julie@beingRUBY said…
Hey Elaine
I think you underestimate your craziness!! haha....In fact I think your story is the winner for me.. hilarious that you got all your work buddies involved in the charade.. like something from a movie...

Actually another crazy thing you did for love was buy a house so Oscar could have a home!! Now That my friend is going all out...

Well I'm sure i;ve done my share of nutty things for love.. well maybe not love.. cause it usually isn't when we get so nuts... I did though travel to LA to meet someone I met here in Australia... my first time overseas alone and i was left stranded at the airport.. hahahahaha but that is a long story which I may tell later

Fete et Fleur said…
Crazy love and great stories! I was racking my brains to think if I had any stories, but I couldn't think of any interesting enough to write about.